Welcome back! Today’s swatch is a fun one; it’s my first-ever Rica polish! This is also a charity polish from the Lighthouse of Hope box curated by Blue-Eyed Girl Lacquer. This is Alchemical Seas of Hope; I’m wearing three coats with one coat of Seche vite top coat. 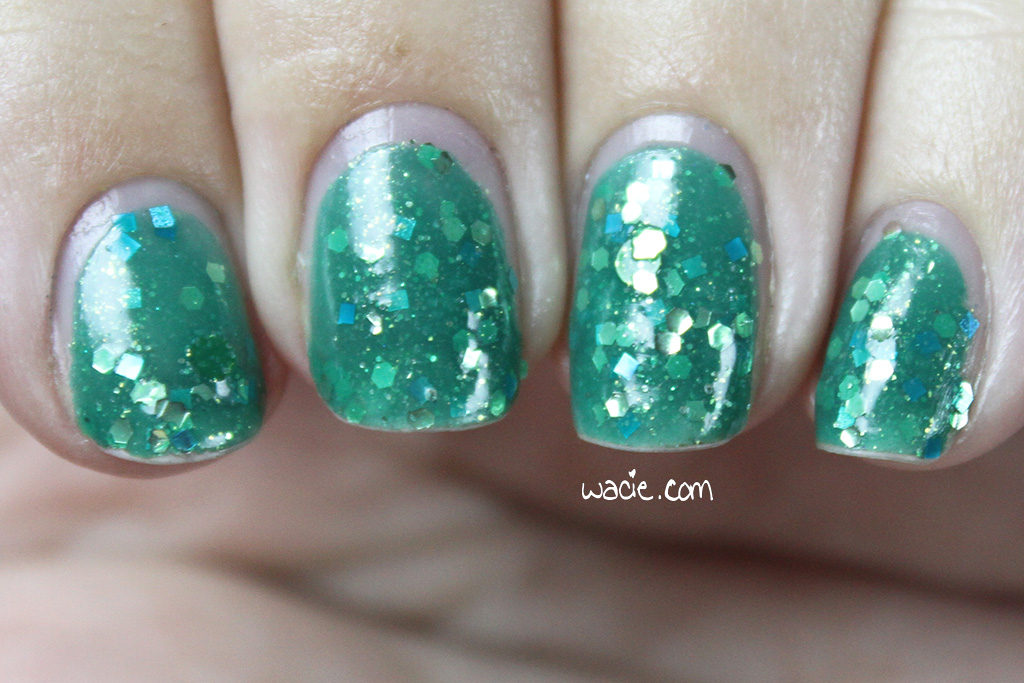 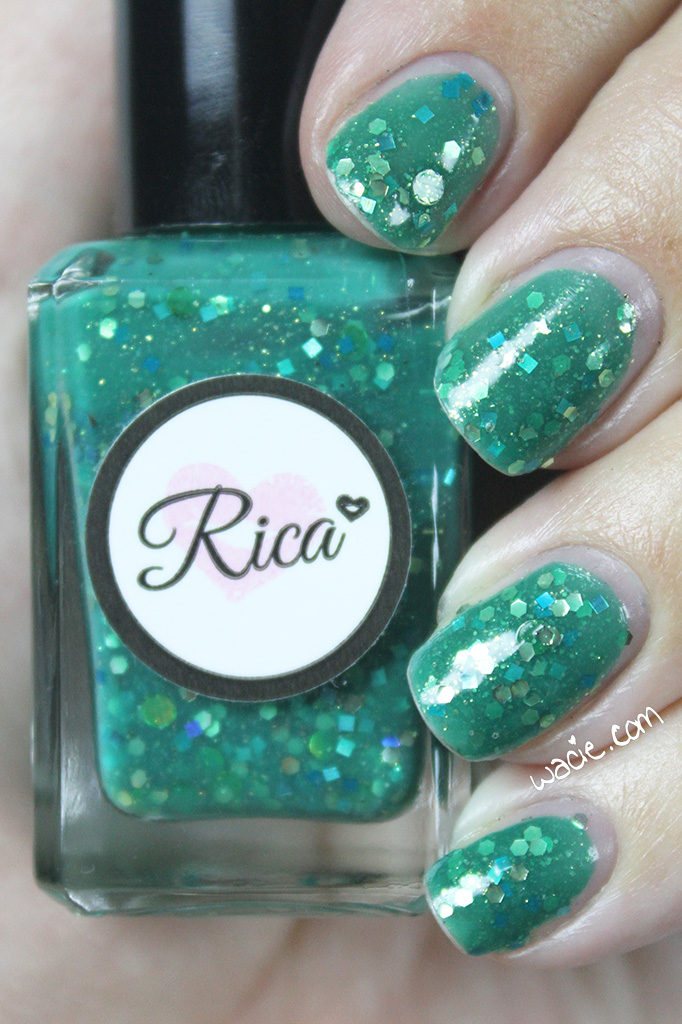 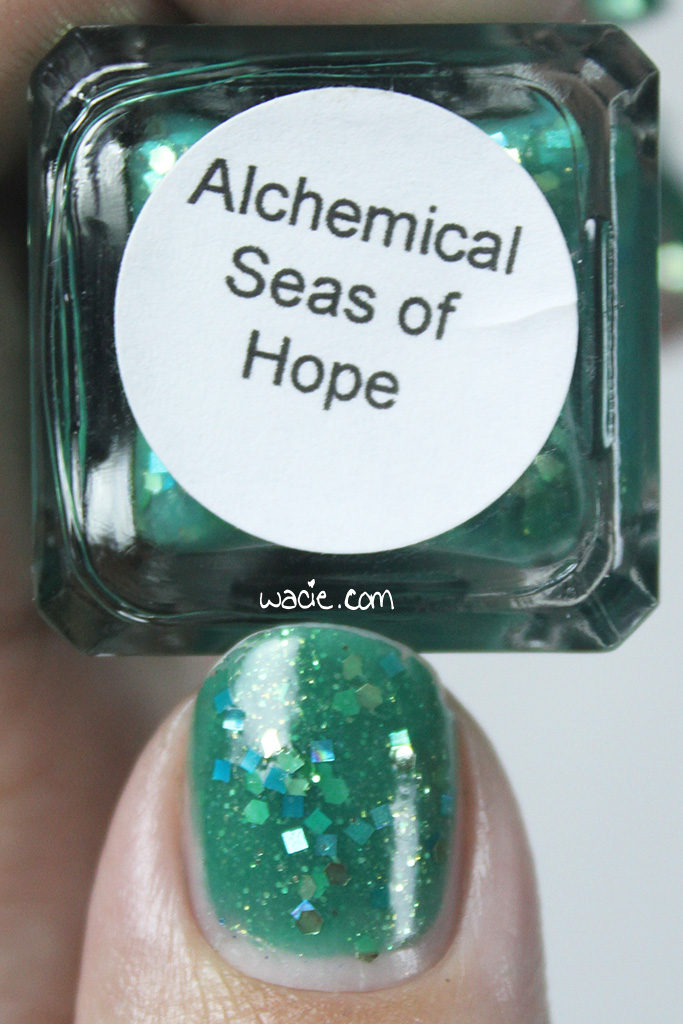 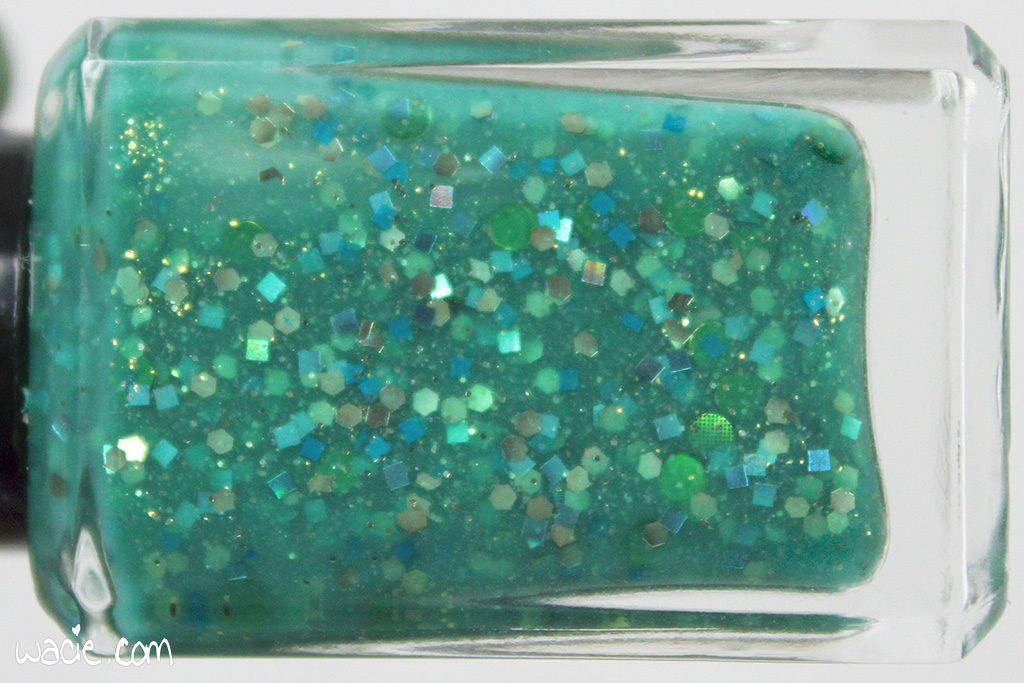 Alchemical Seas of Hope is a green jelly with green and gold glitters, as well as a fine golden shimmer throughout. Application was good; even though there’s a lot of glitter in the bottle, there isn’t a lot that comes out on the brush. Additional coats deepen the jelly while only adding a few bits of glitter. I kind of like this look as is, but I wish there’d been more glitter. The green jelly is wonderfully squishy. The polish dries quickly enough and with a textured glitter finish. I used top coat for smoothness and extra shine. 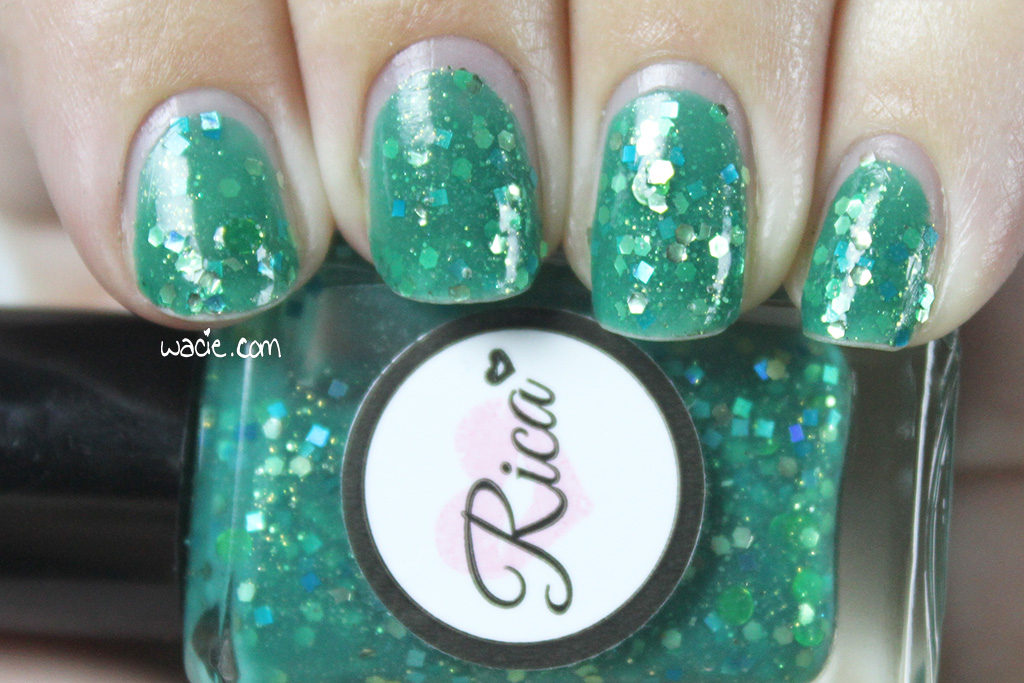 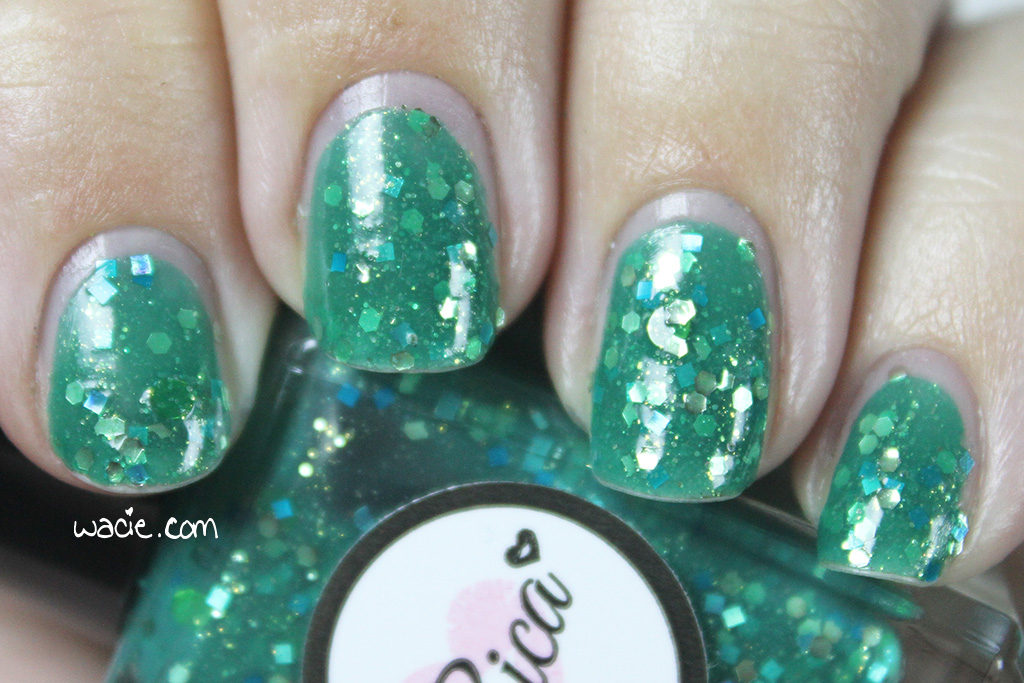 You might notice the edges on some nails to be ragged and chipped at the tips. I’m not completely sure what caused this. I can tell you that some nails have thicker coats of polish than others, and that might have led to easy chipping. Also, Seche Vite never seems to play nice with glitter jellies and crellies, shrinking the edges away from the tip of the nail. Either way, I do apologize for how terrible it looks. I didn’t really realize it was this bad until I took photos. 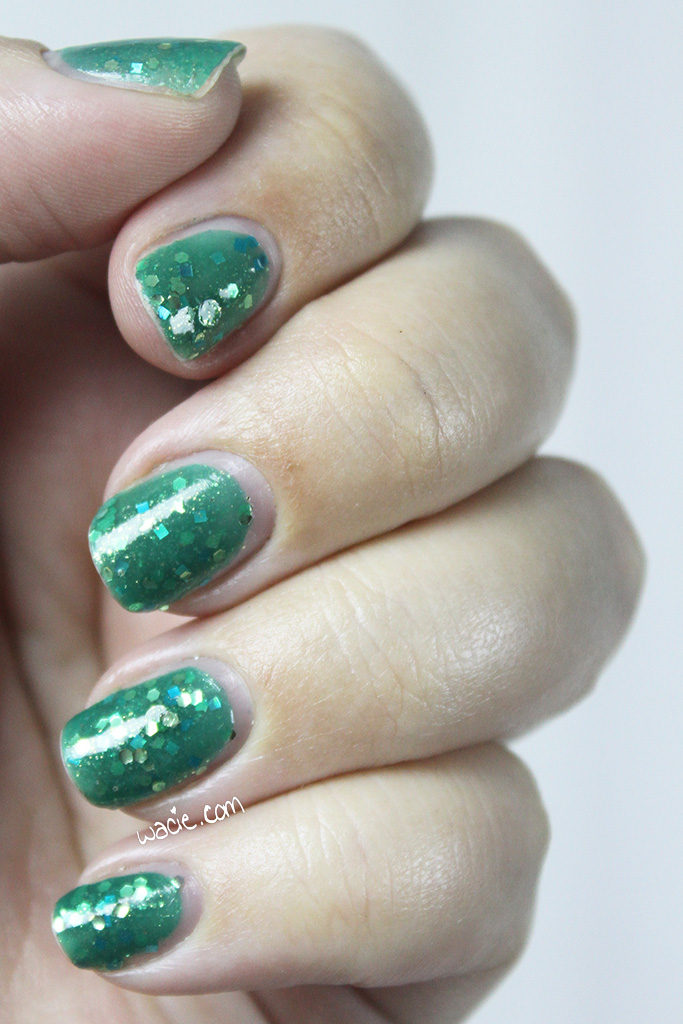 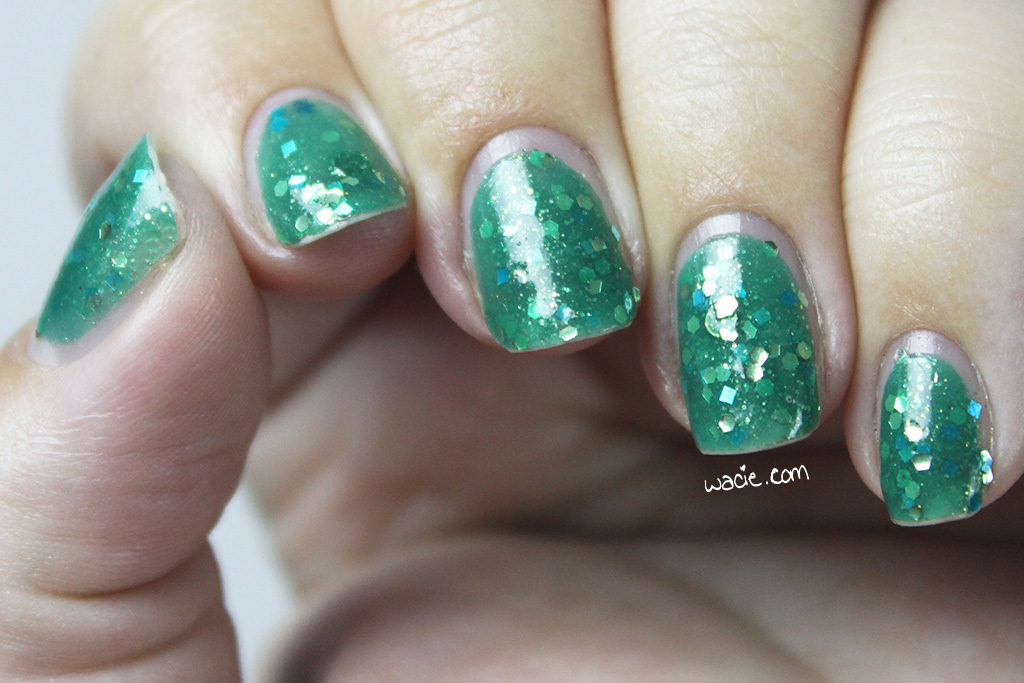 As I mentioned, Alchemical Seas of Hope is a polish in a charity box called the Lighthouse of Hope. $60 from each box is donated to I Need a Lighthouse, a depression awareness network. Rica had this to say about their polish:

“I named it Alchemical Seas of Hope because sometimes depression can feel like you’re in turbulent seas. As hard things may seem to be, there is always a lighthouse of hope in the horizon. Don’t lose sight of that.”

The Lighthouse of Hope Box contains eight polishes from eight makers, including Rica’s Alchemical Seas of Hope. The box is $80; $60 of it goes to charity. It’s available from the Blue-Eyed Girl Lacquer shop. Other Rica polishes are available from their etsy shop.

Hello, readers! It’s Monday again, and I have another mani to show you. I’m wearing China Glaze’s Crackle Glaze in Oxidized Aqua over Julep’s Char, topped with one coat of Rica‘s Glossy Glam top coat. 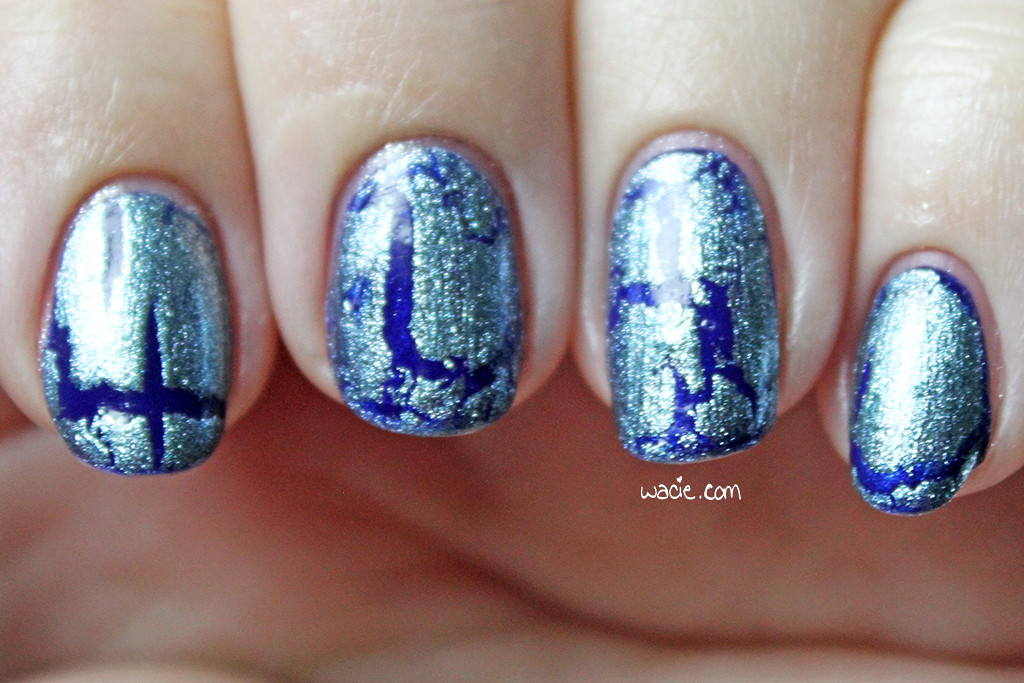 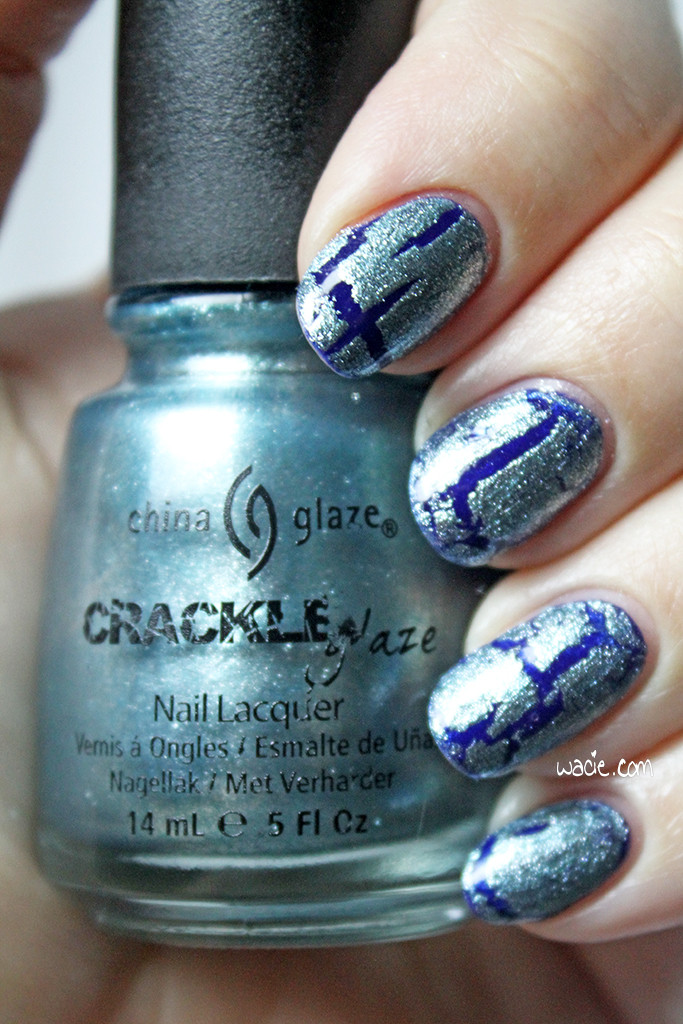 For a Julep polish, Char, a deep blue creme, is pretty good. I had almost-opaque coverage in one coat; I guess these darker colors use more pigment, because I never have to struggle with the darker colors, only the light ones. It dries with a beautiful gloss. One thing I do notice, however, is the smell; Julep polishes generally have a mild smell, but this one is way different and much stronger. I suspect the pigment is the culprit; I have a similar shade from OPI that has the same odd scent. I’m looking forward to wearing Char on its own. 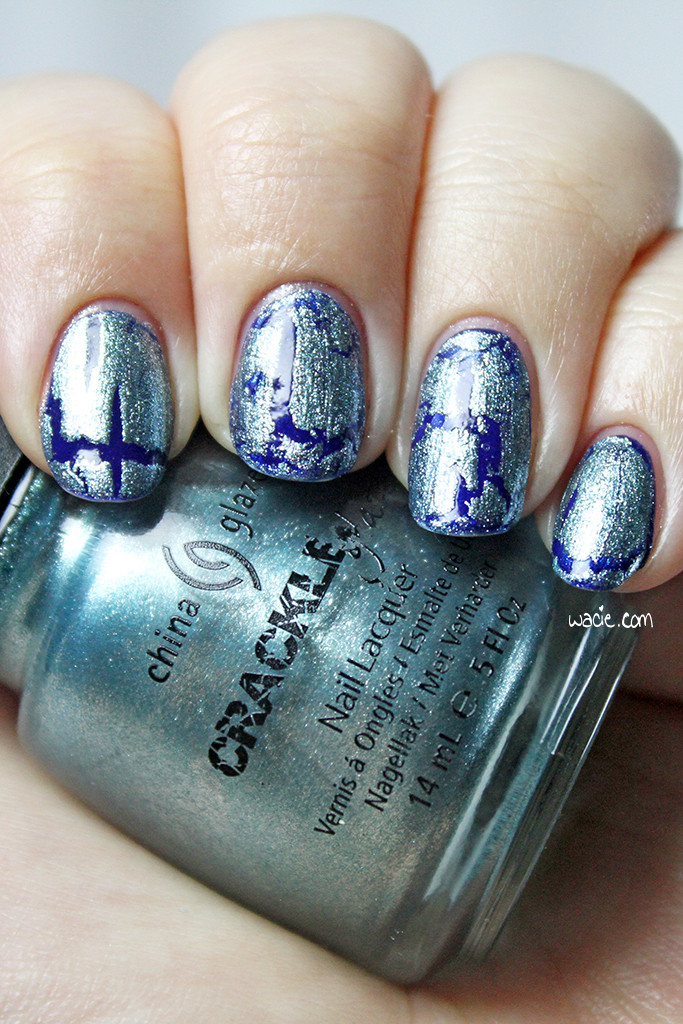 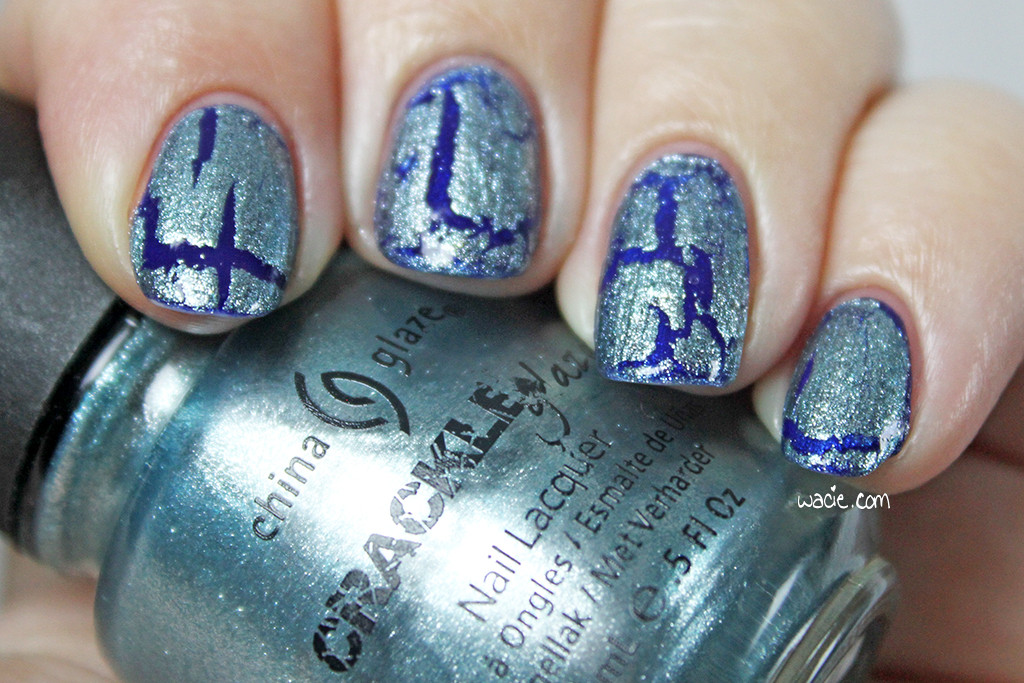 Over Char is Oxidized Aqua, an icy blue crackle polish. This is the part of the mani I don’t like so much. You know how it is with crackle polishes; you sacrifice many tiny cracks for good coverage. I wanted good coverage, and so I have one or two cracks on each nail, which looks pretty silly. Also, I had to redo some nails because the crackening never took place. Overall, I guess it isn’t that bad. I can talk about how lame the polish is, but I only have myself to blame. I didn’t have to use it. 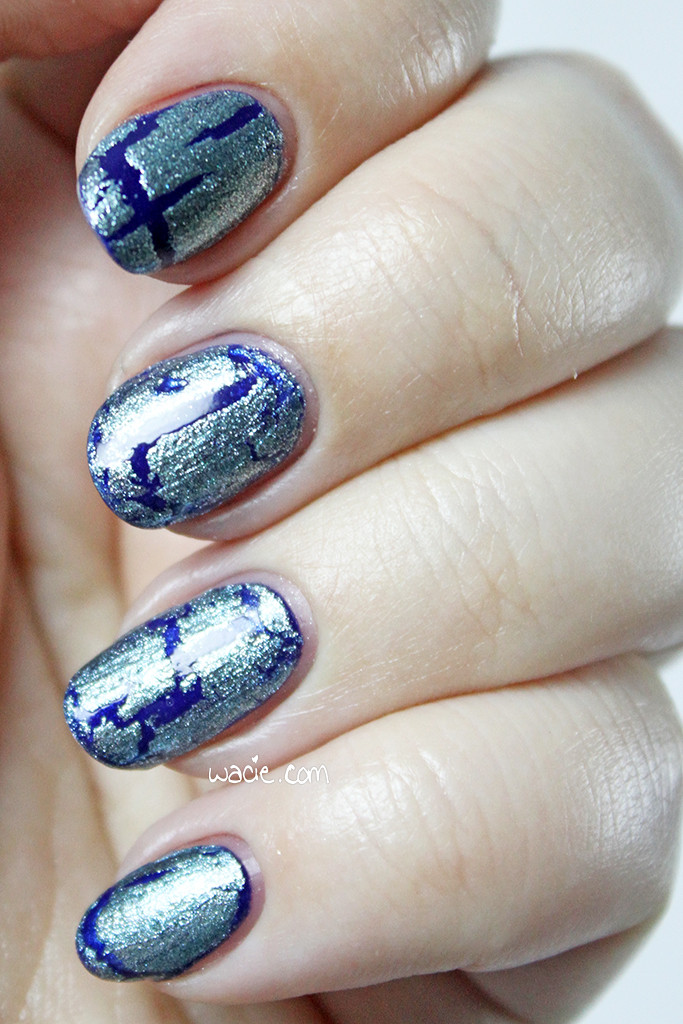 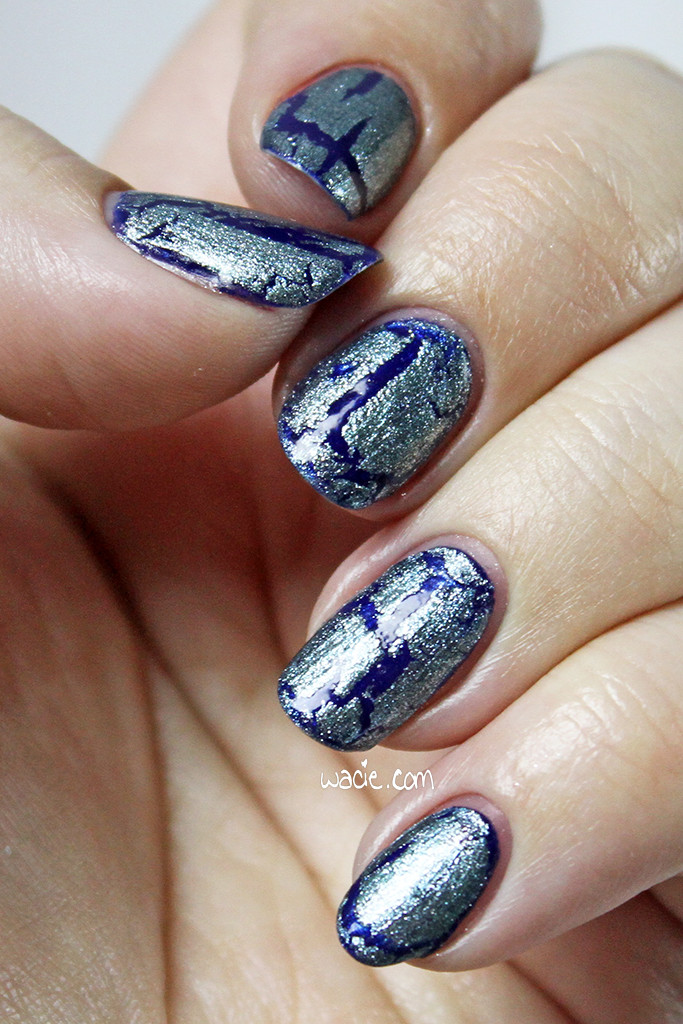 Let’s talk about the new top coat! I got a bottle of Rica’s Glossy Glam in the March/April Beauty Quartet Box. I’ve heard so many good things about this top coat and I see it everywhere, so I’m excited to have the chance to try it out myself. I’ve used it in two manis now (the first is one you’ll see later this week) and I’m pretty happy with it so far. It doesn’t feel totally dry after five minutes, so I’ll have to remember to give it ten. The shine is beautiful, and my nails are so smooth; I don’t feel any of the cracks or ridges from the crackle polish when I touch my nails. I find that impressive.