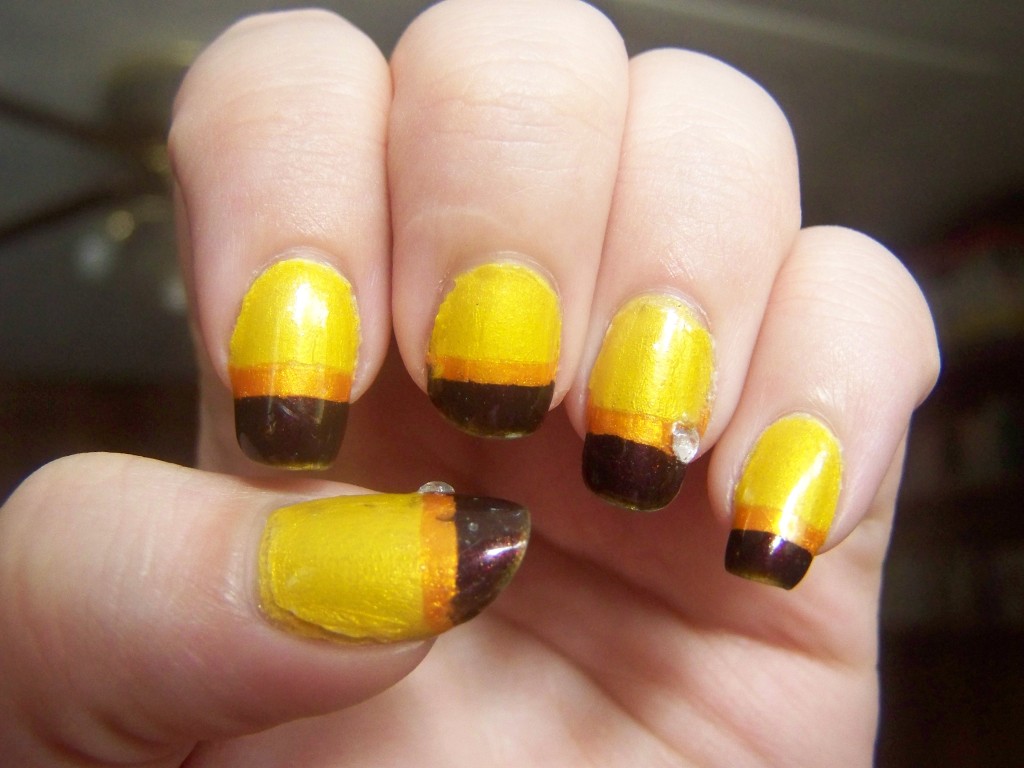 I had this yellow, and I didn’t really know what to do with it. I didn’t want to do another gradient right away, and I didn’t feel like trying dots or anything. My original plan was to use the French manicure guides, but I didn’t have enough after last week’s manicure, so I used tape. 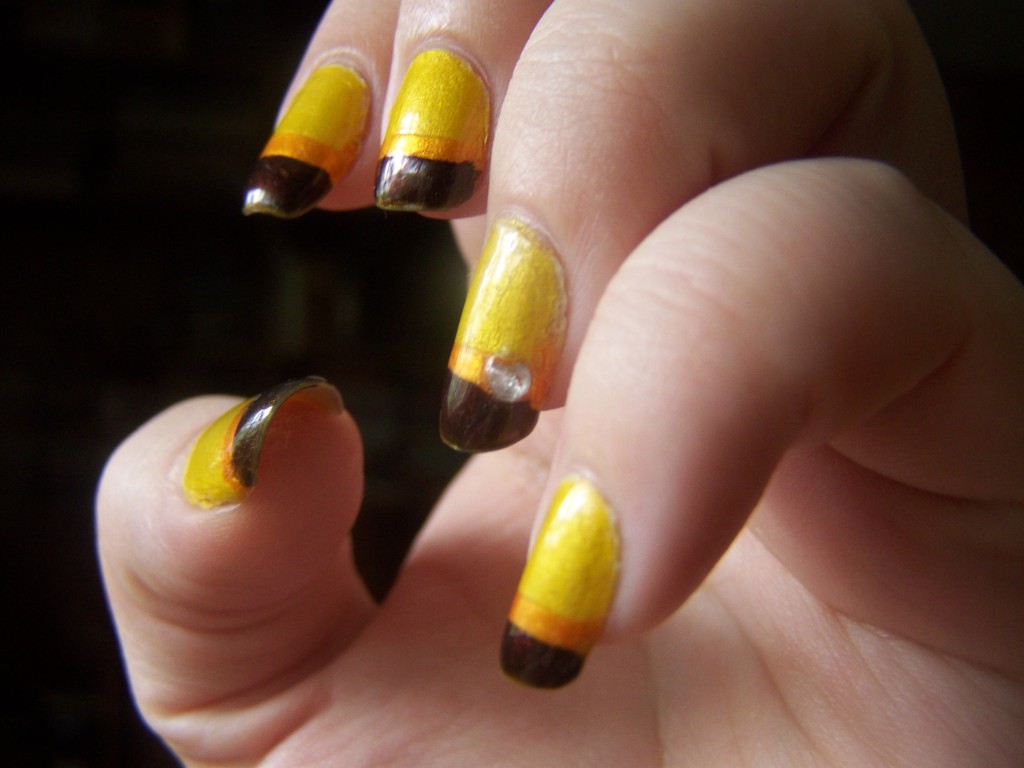 Rhinestones! The ring finger is a heart shape, the thumb is a diamond.

I was kind of in a rush with this. I had people over this weekend, and they had car trouble and had to stay over an extra day, so I hurried to get them done. I made kind of a mess, and I made the mistake of using polishes that weren’t very opaque. I put thick coats of polish on, and it kind of migrated away from the tips and left me with some weird discolorations and stringy bits the tape lifted. The tape also pulled up some of the orange pieces, hence the rhinestones.  Finally, I didn’t wait long enough to apply the top coat, so some smudging occurred.  Basically, these nails are like the sad yellow markers from our childhoods that met the black marker a few too many times. They definitely looked better in my head, and could have turned out better if I had been able to take my time with them. 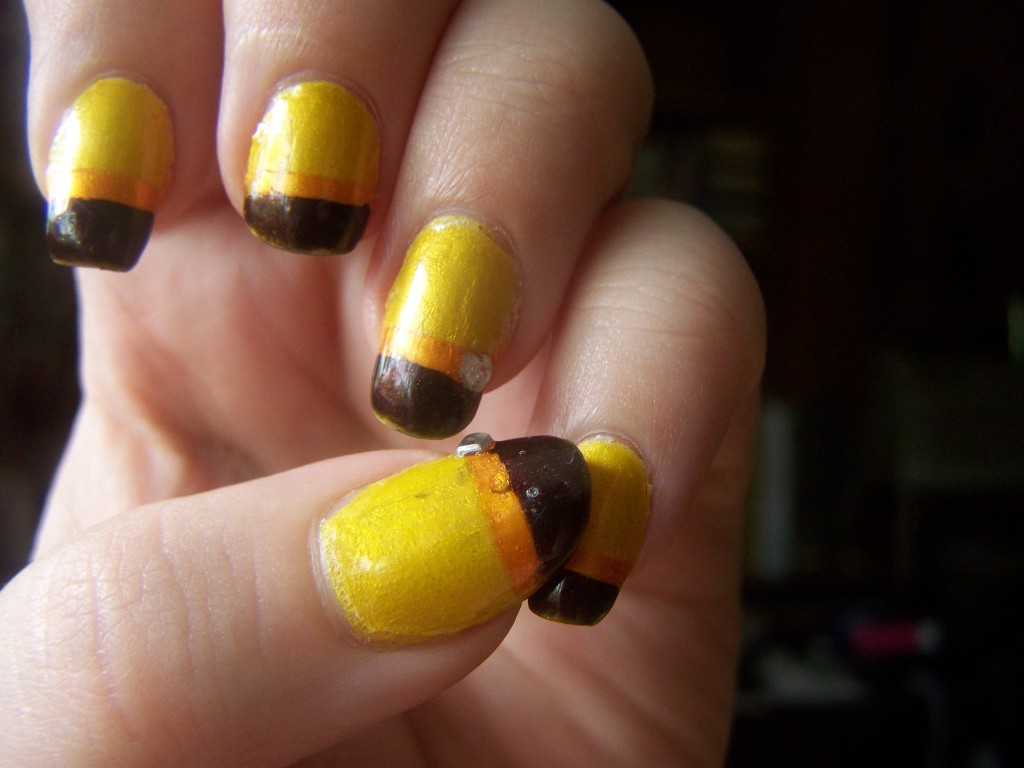 Bubbles and smudges and all kinds of sadness.

I love the color combination, though. It just came together very easily, and it wasn’t until yesterday when I saw this pillow in my living room that had been crocheted or knitted by someone’s grandmother using the same colors. I wonder if I was subconsciously influenced by it. 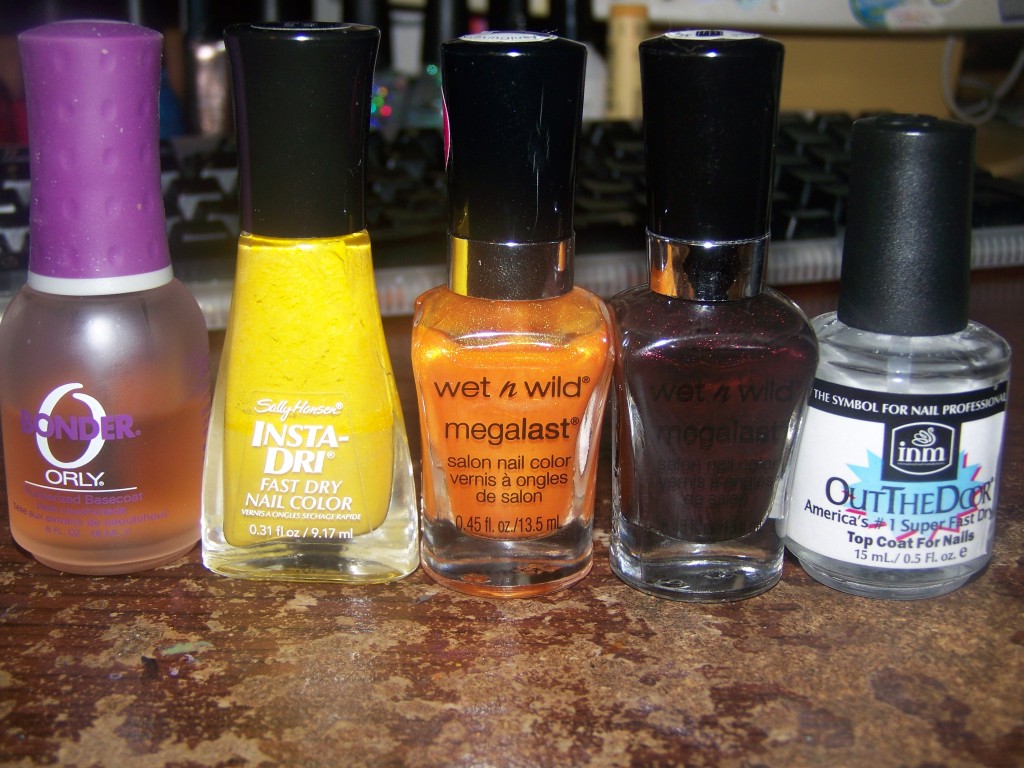 Bonder, Quick Canary, Orange Smoothie, Under Your Spell, Out the Door

This is the first time I ever used Wet ‘n Wild polishes, and they have this really wide brush that wasn’t suitable for detail work like this. I bet they get really nice coverage in different situations, but I don’t think I’ll use them again for this purpose. I put on a lot of top coat to smooth down the rhinestones, and it almost feels like Seche Vite again. I miss it.

I have really mundane dreams. They’re always about washing dishes, picking up dry cleaning, standing in line at the bank. Even in my dreams, I can’t escape the banalities of everyday life.  Some night a few weeks ago, I had a dream about painting my nails, and I gave myself the best manicure ever. Upon waking, I decided that I was going to do it for real. Here’s how it turned out. 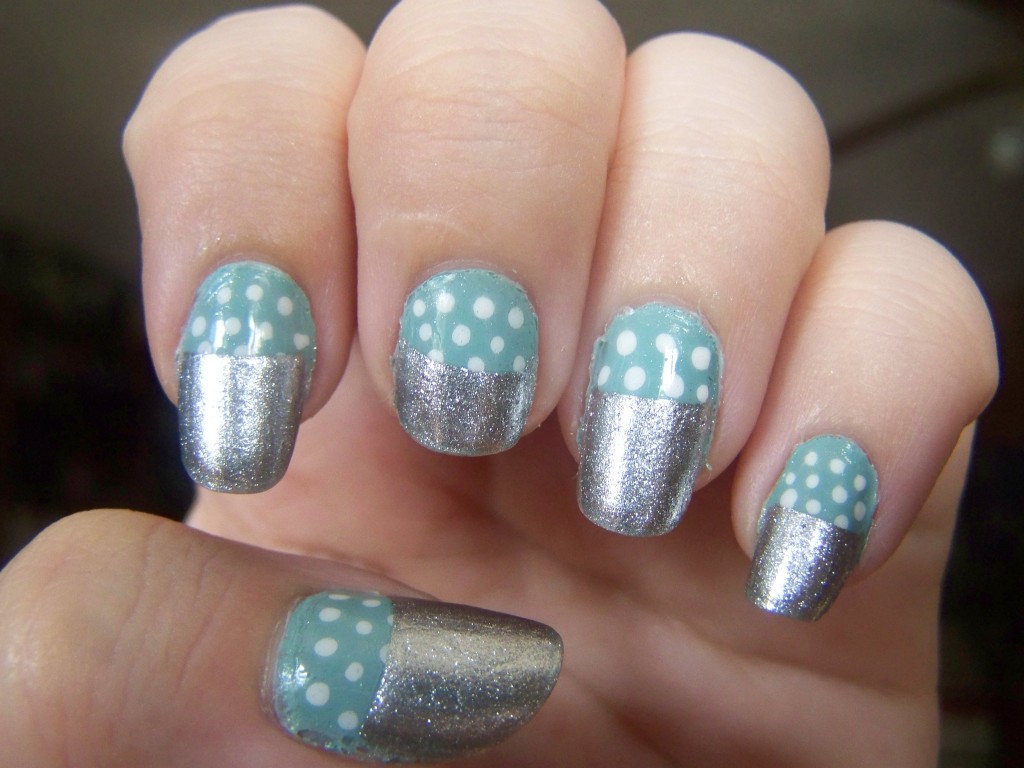 It’s not really my style, but I’m very happy with it. The silver is much shinier than I anticipated, but I like it anyway. There are tons of imperfections, but I’m not going to bore you with those details. I’m so pleased with it that I don’t even care. 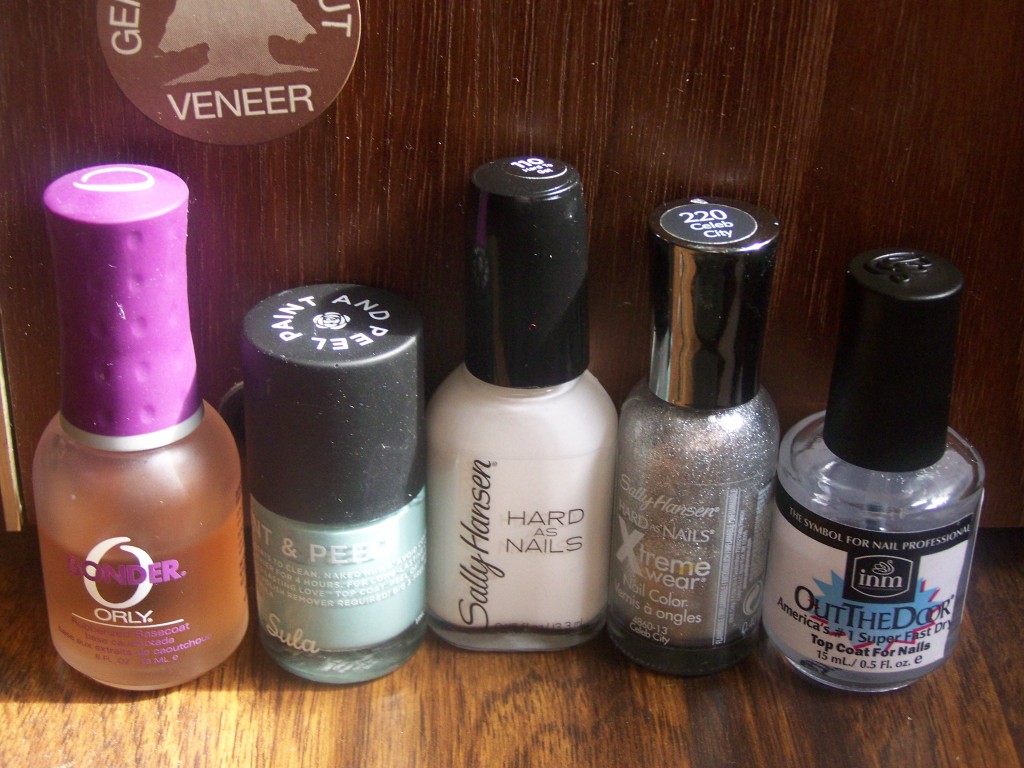 Bonder, Haze, Hard to Get, Celeb City, Out the Door

One thing about this manicure: it took me ages to find the right blue. Eventually, I settled on a color called Haze by Sula. I’ve ever seen this polish anywhere but Ulta, and its formula is much like the stuff we used as children, the stuff that came in garish colors and peeled right off. I used it as a base color in another manicure and had good results, so I tried it again. This time, though, I used the French manicure guide strips to get my half-moon shapes, and it hadn’t occurred to me taping and peel-off polish wouldn’t work well together until after I’d nearly pulled a few of them off. Luckily, everything went according to plan.

So my nail disaster this week was a rare event: I emptied a bottle. 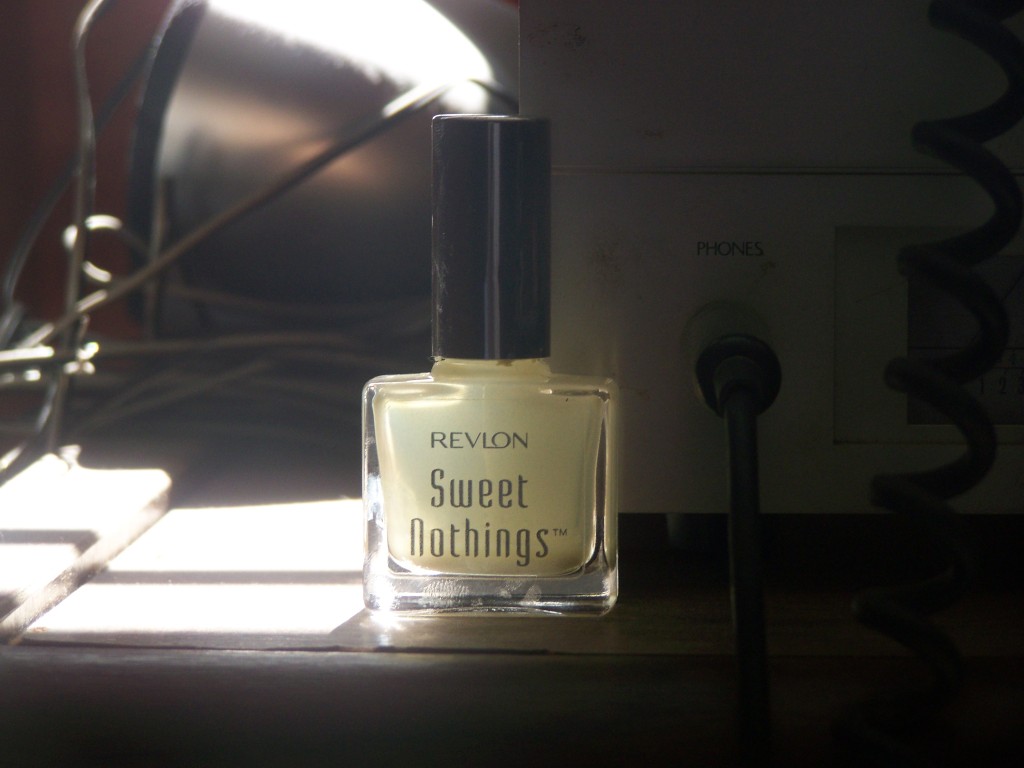 I’d had this bottle for a while, almost ten years probably. I got the whole collection of them when Walgreens had them on sale for two dollars a bottle, once upon a time. I’d been using them occasionally ever since, just wearing them over my naked nails to give them a hint of shimmer. When I got into nail art and multiple colors, I struggled to find a way to preserve that natural, minimal look while still getting some attention. I tried to work it into this gradient, and towards the end, I didn’t have enough polish left to finish it. I had my heart set on this gradient, so I took it off and started with another color. I kind of feel like a jerk. Not only did I run out of the polish, I wasted what I had left. Sorry, Satin Sheets. You still had a good run. 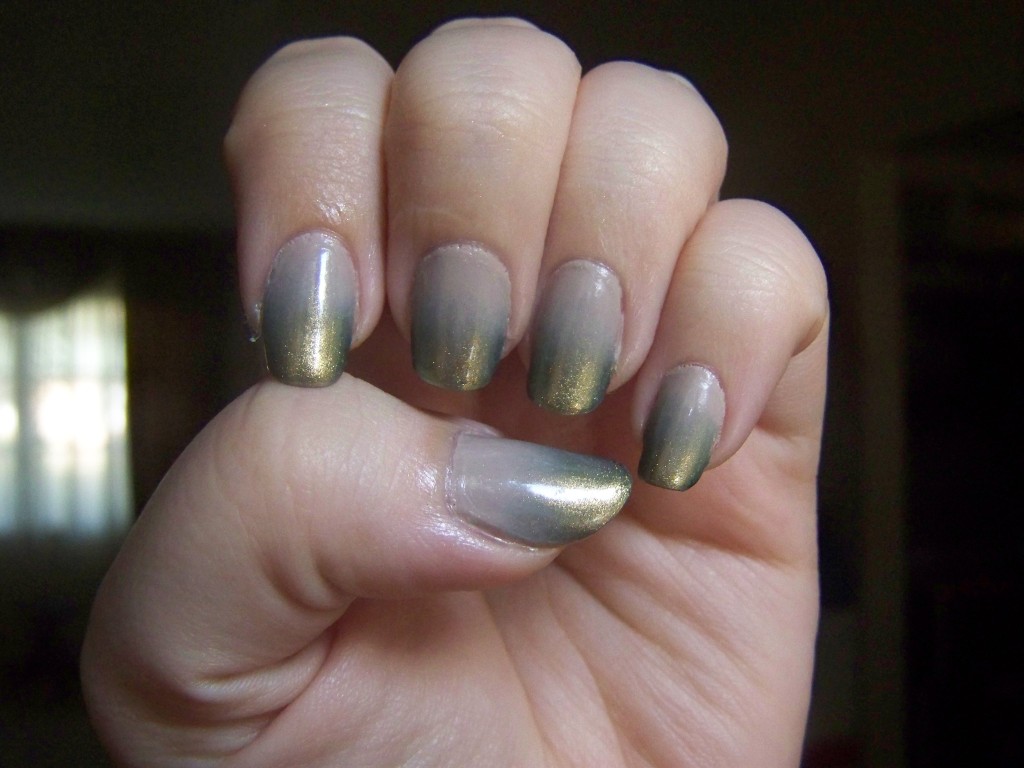 So I started over with a crème nude. I still wonder what it would have looked like with the sheer white, but I think I like what I ended up with. The first coat of Whipped was so sheer that I thought it was a jelly, but turned opaque with another couple of coats. Rare and Radiant has a lovely green color in the bottle, but appears mostly gold on the nails. It also appears I didn’t blend my pinky nail very well. 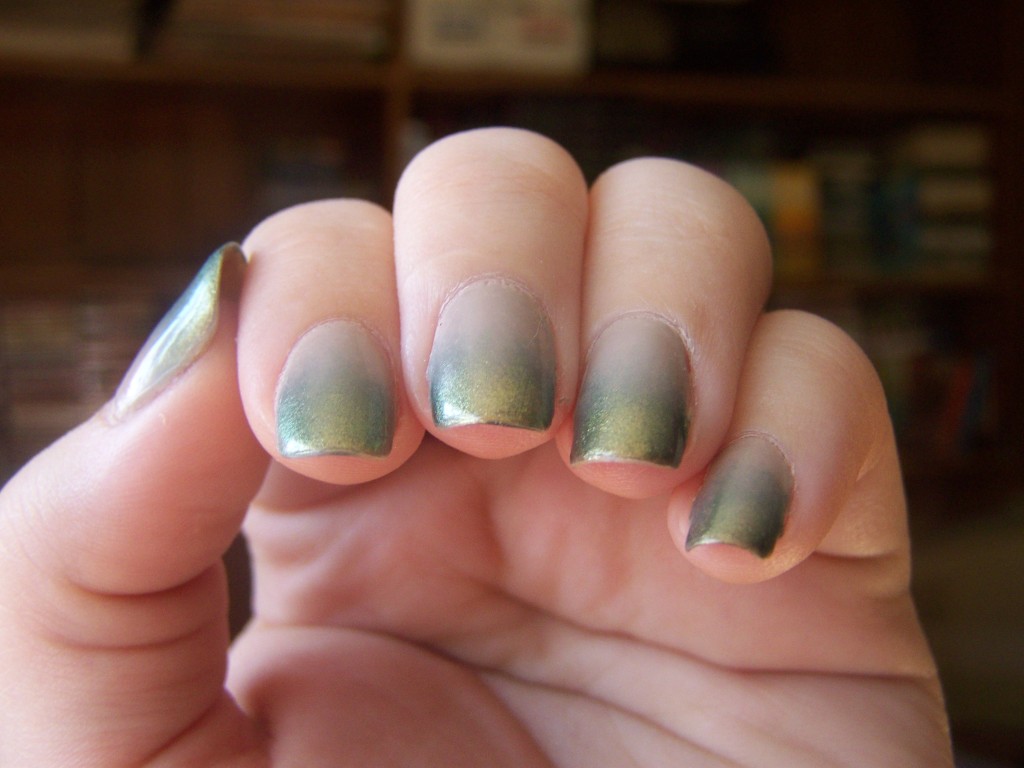 I was trying to get the green shimmer to show up. It did a little bit.

I like gradients. I like them a lot. I feel like it’s the best look I can get with minimal effort. I always manage to screw up taping, dotting is tedious and prone to mistakes, I don’t have the patience for freehanding anything. With gradients, I just dab a sponge on my nail, and that’s it. I still get to try surprising color combinations; I just don’t have to work as hard for them. 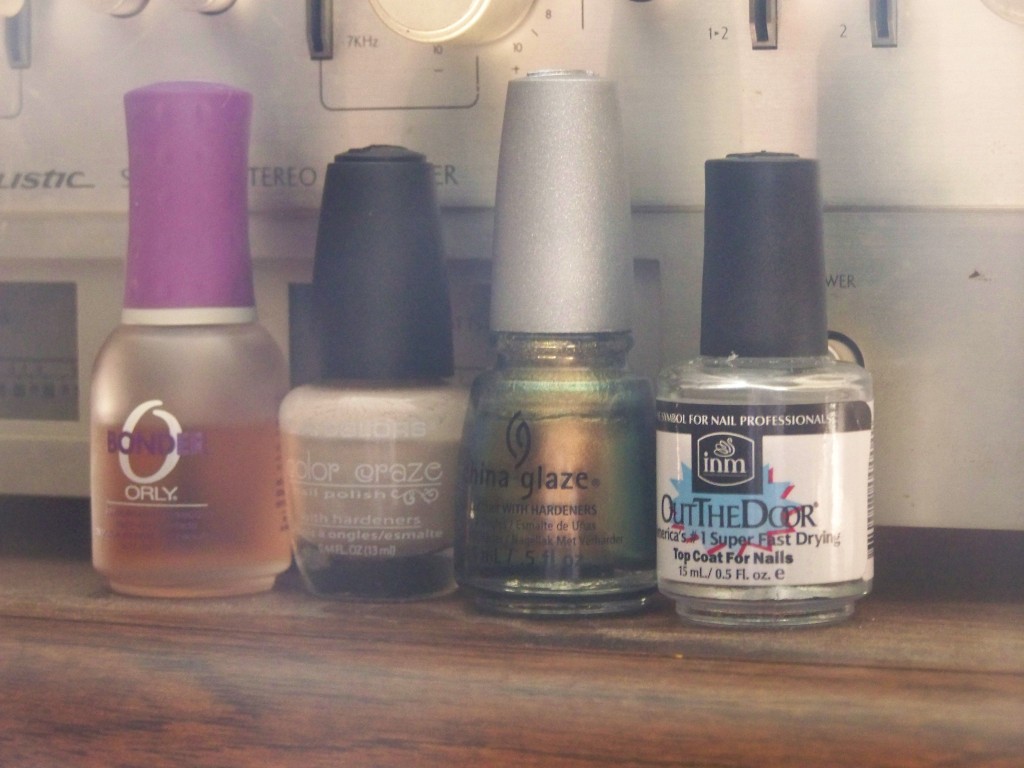 Bonder, Whipped, Rare and Radiant, Out the Door

Now I’m off to recount my polish bottles. I was somewhere around 250 the last time I checked, but I need to make sure that’s accurate, especially now since I’m down one. 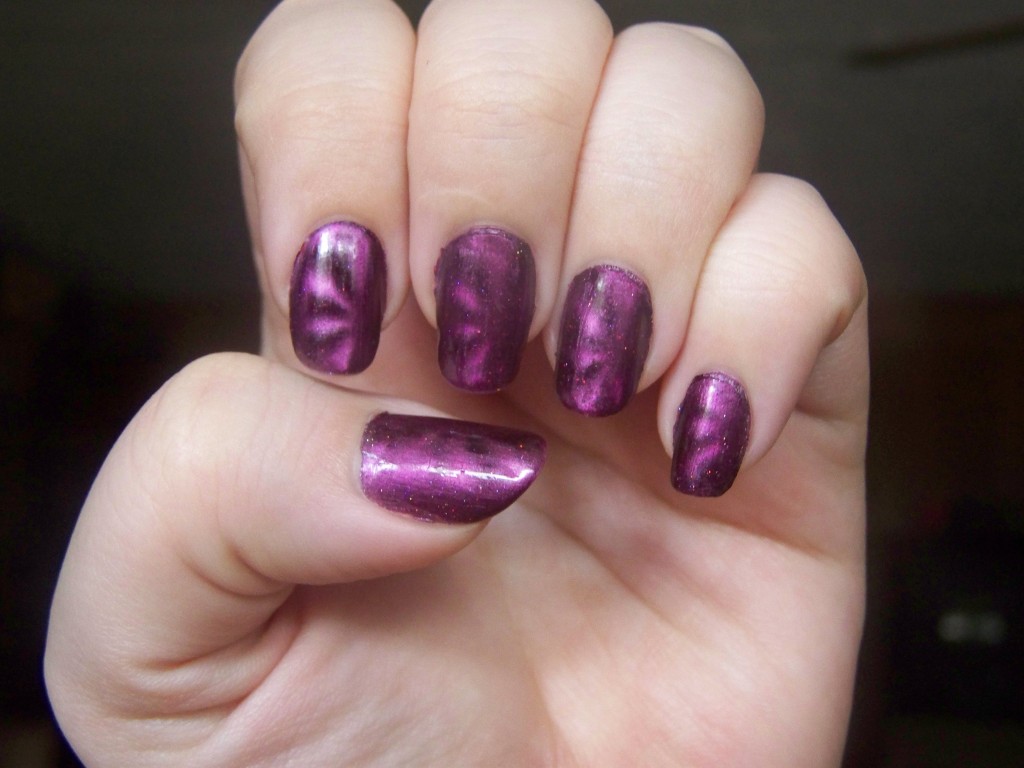 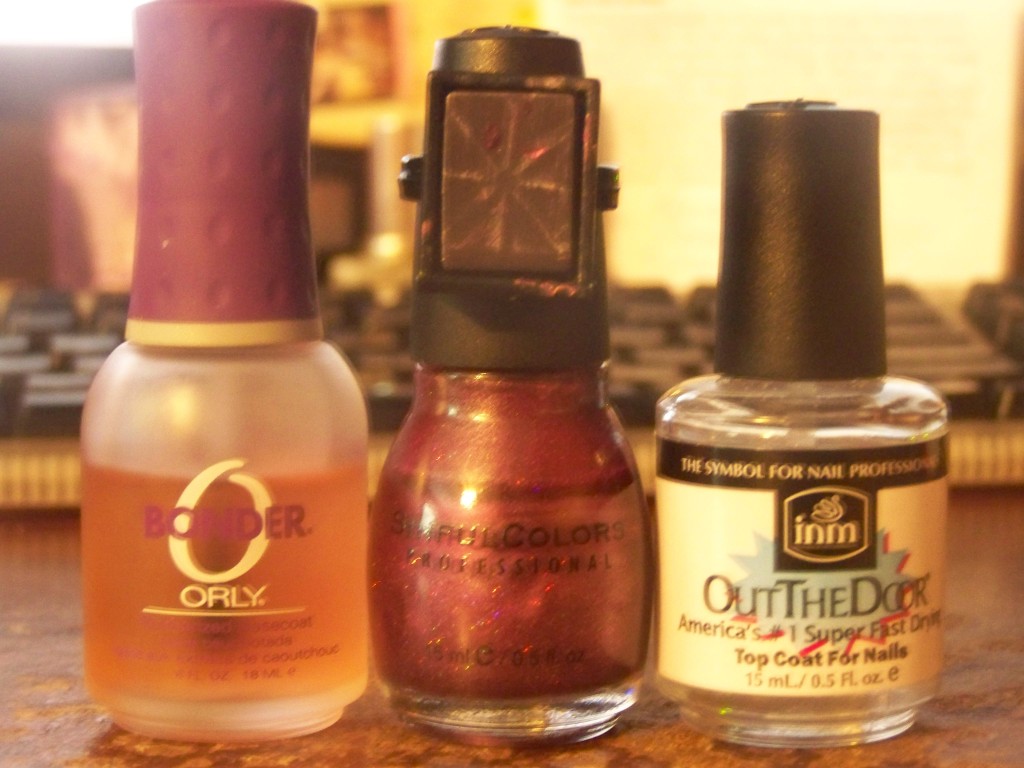