Happy Monday, reader! Today is the first day I’ve had off since Thursday. My retail job is getting busy since there’s only a week left to shop for Christmas gifts — and I’ve barely done any shopping. Today, though, is for ignoring my responsibilities and doing my nails and maybe having a bubble bath later. For today’s relaxing look, I used Blue-Eyed Girl Lacquer‘s Watch the Walls over Lynnderella‘s Baby Pink Pink. 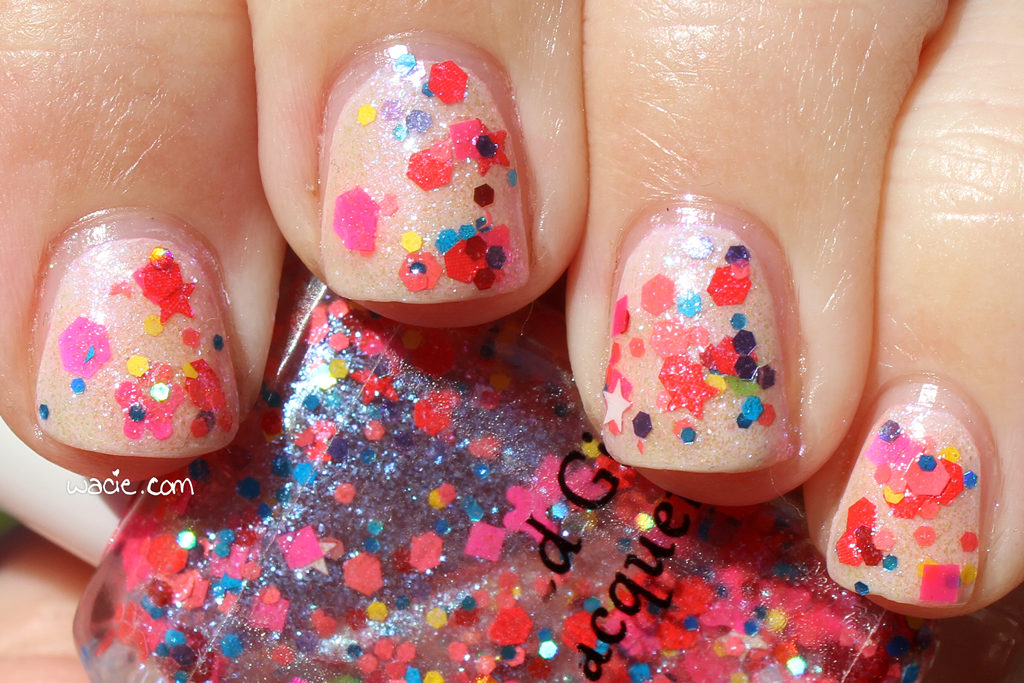 It’s 80 degrees out in December. It feels like summer, so it’s summer on my nails.

I’ve been kind of self-conscious about my shorties lately. I even bit one down because it was jagged, and I was really disappointed with myself after that. As a recovering nail biter, it is always so hard to grow them out past this stage, because it’s really easy to slip into biting again. One day at a time, I guess. 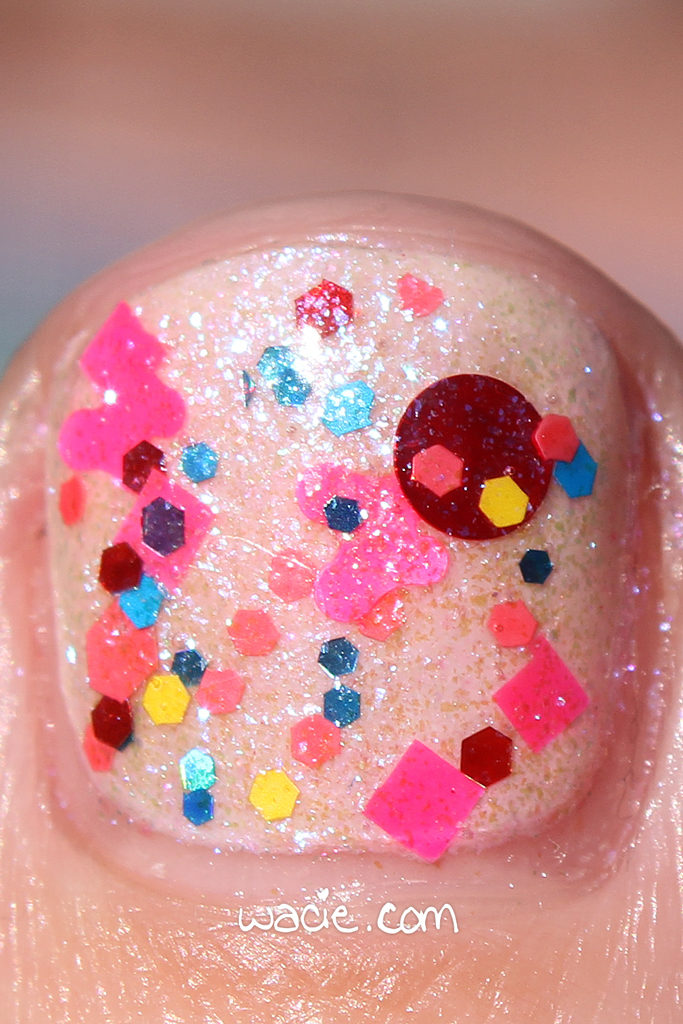 I bit this one so far down it hurt. 🙁

Glitter will help me get there. Watch the Walls is still one of my favorite BEGLs, and likely even my most used; the bottle is about two-thirds full at this point. I like seeing the empty out, because the polish is getting the love it deserves, but it’s sad to see it go. Once these polishes are gone, they’re gone. In this instance, I paired it with Baby Pink Pink because they both have an icy blue shimmer that stacks nicely.

Welcome back! I’ve got another super-shifty microglitter to show you today. This is Digital Nails‘s Galactica over Essie’s Sew Psyched. 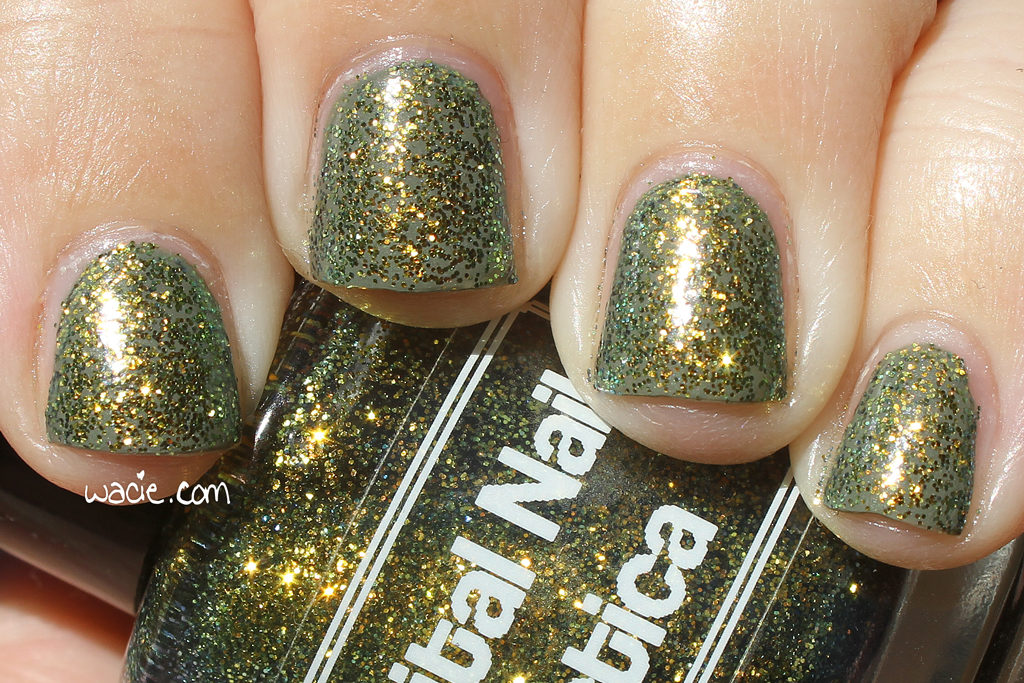 Last week, I showed you Leviathan, that crazy shifty glitter that went from purple to blue to orange. Galactica is a sister polish to Leviathan; they are both named after fictional spaceships and feature wildly shifting glitter. These polishes are both so much fun to wear because they look so different in every lighting situation. 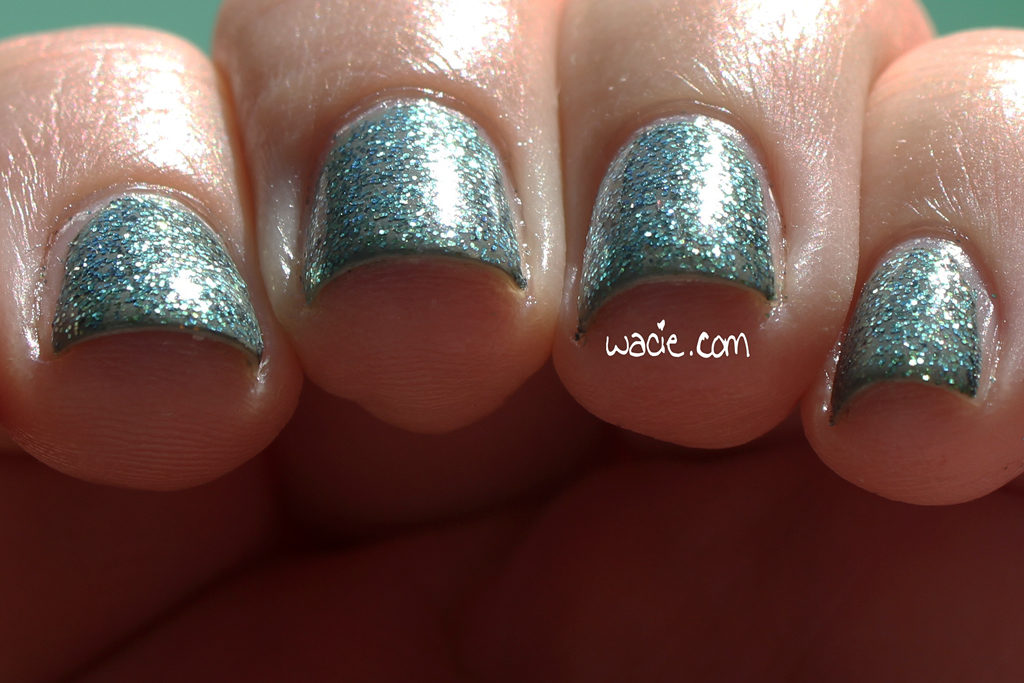 Sew Psyched is a great base for this glitter because it just blends into it most of the time. Of course, there are instances where it looks kind of odd, like when the light is shining right on the glitter and it’s super gold and the base is just kind of there. For the most part, though, the glitters and the base are the same, and all you see is the shine from the glitter. 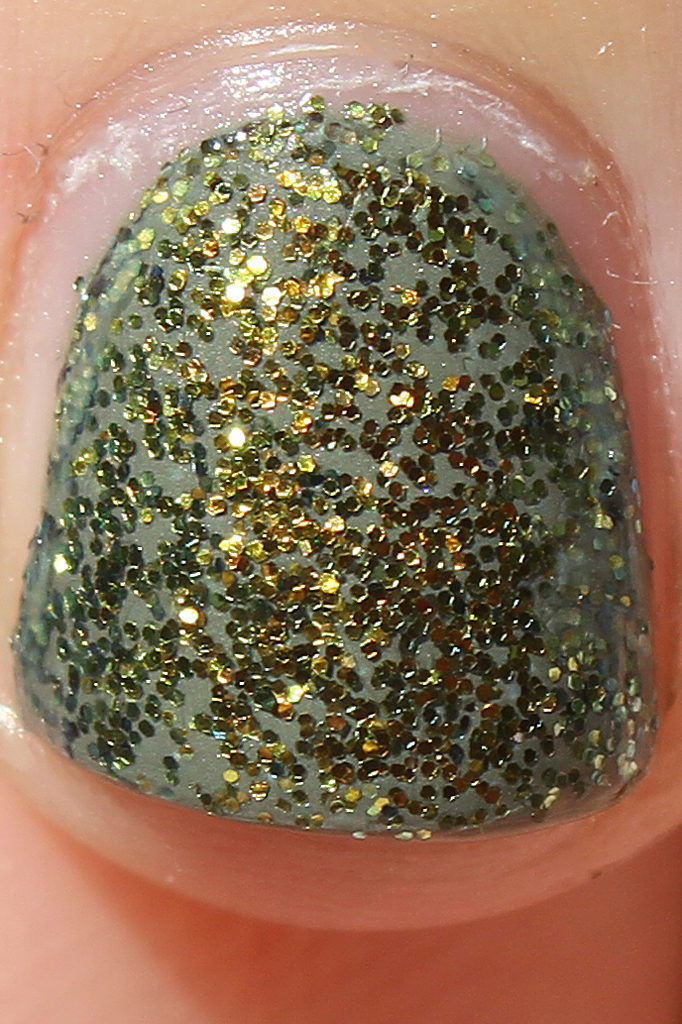 Sew Psyched and Essie are sold in stores. Galactica and other Digital Nails polishes are sold in their etsy shop, which is currently closed. 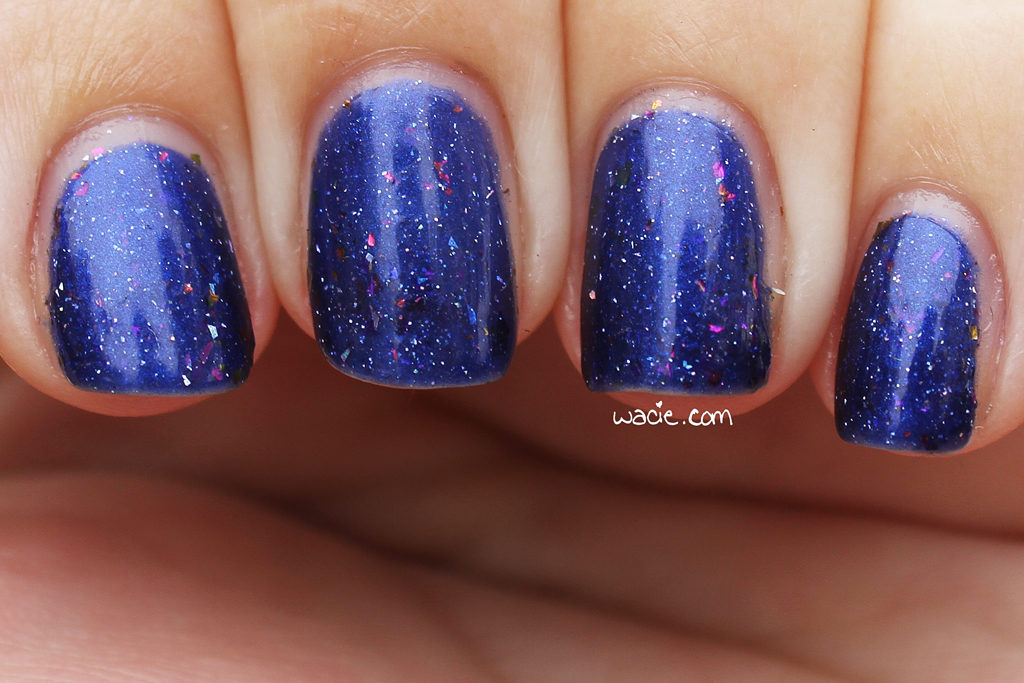 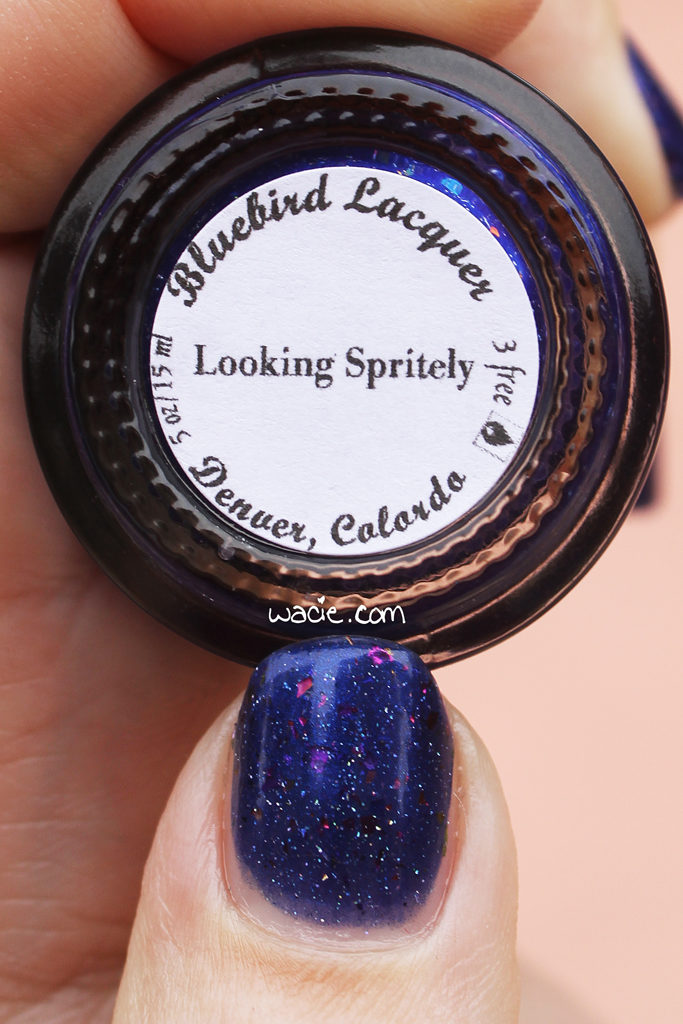 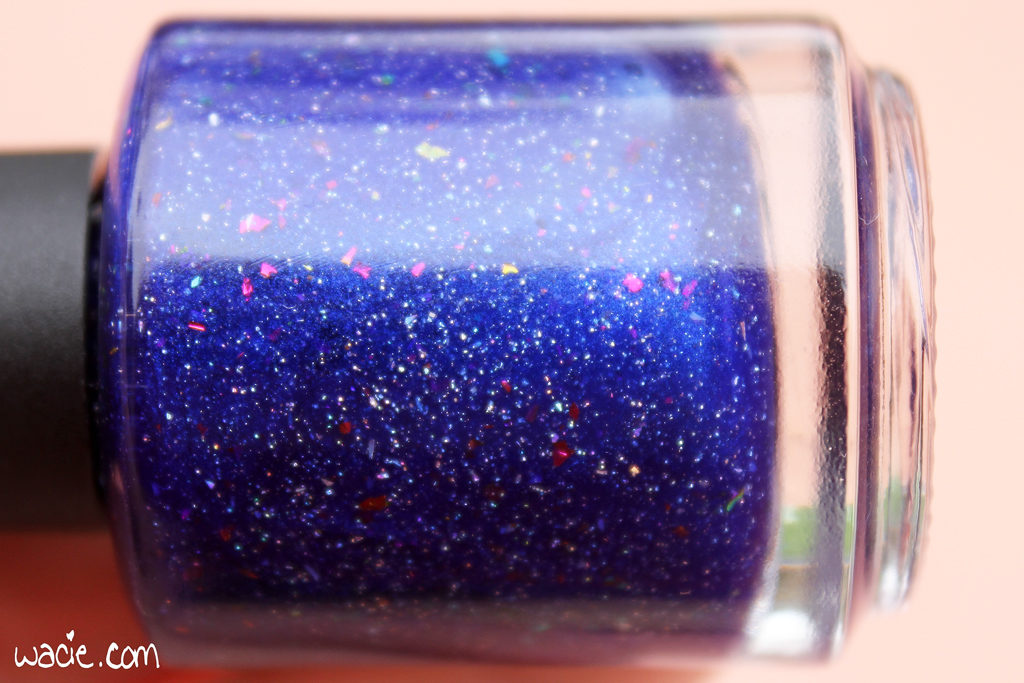 Looking Spritely is a cobalt blue polish with some iridescent and shifting flakes and holo accents. Unfortunately, because it was cloudy and gross on the day I took these photos, the holo is hidden. The polish was really easy to apply and work with; the product consistency was just right, and I had full opacity in two coats. It dries to a smooth finish; I used top coat for extra protection and shine. 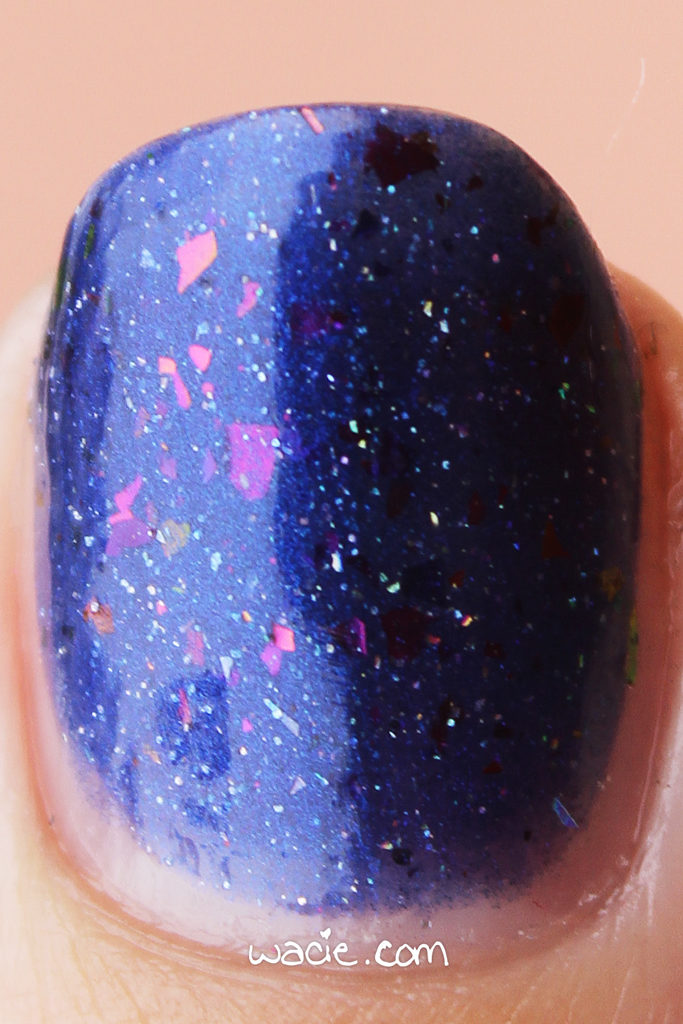 Because of the lack of sunshine, I was not able to do this polish justice. The holo is the crown of this polish. I mean, it looks great here; in blistering Florida sunshine, we’d probably be seeing all the holo and none of the flakies, so I guess that works out. My point is that there’s a ton happening in this polish in person, and there’s way more sparkle. 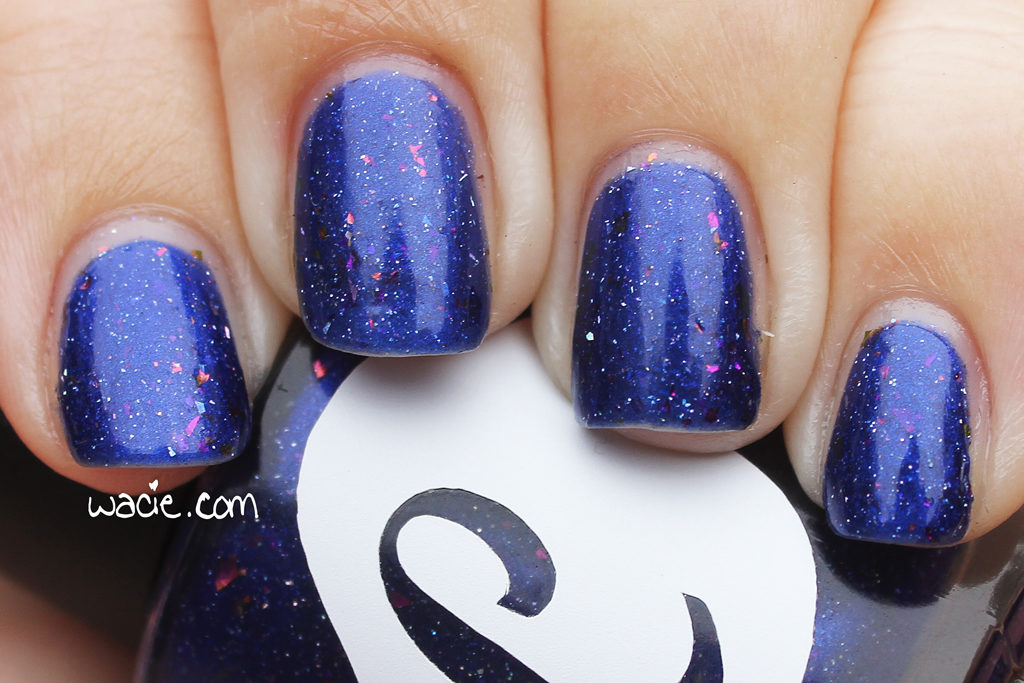 Looking Spritely was, I think, an Indie Shop Atlanta exclusive, but I’m not sure. For the moment, Bluebird Lacquer is on a break while they process holiday orders.

Welcome back, reader! I still have swatch posts to catch up on, so I’m getting through them. This is Dainty Digits’s Stream of Enchantment; I’m wearing three coats with one coat of Seche Vite. 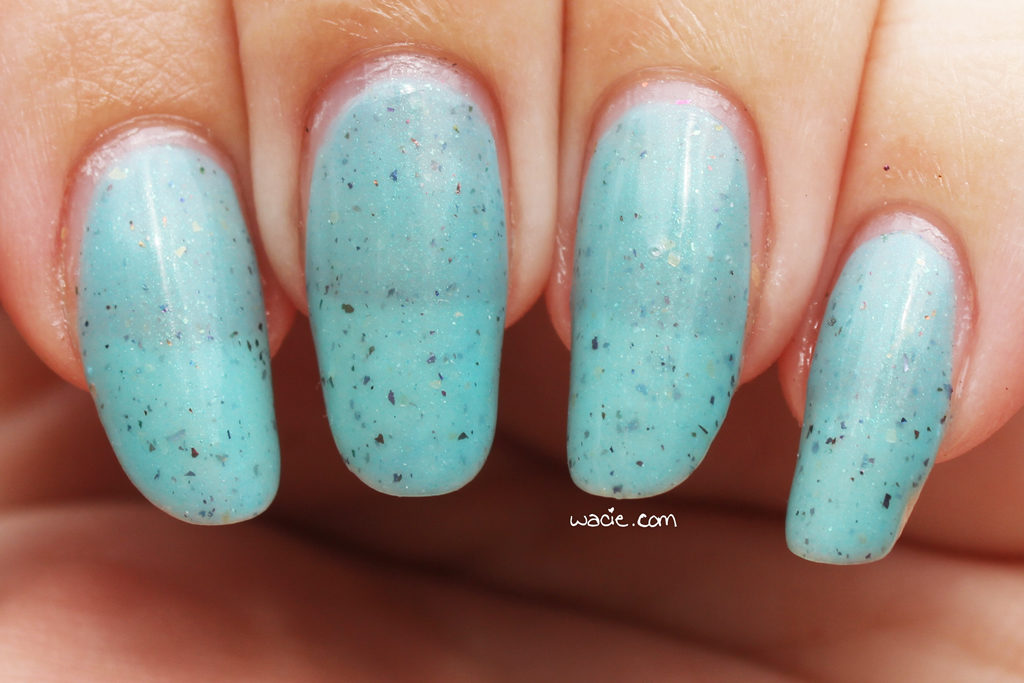 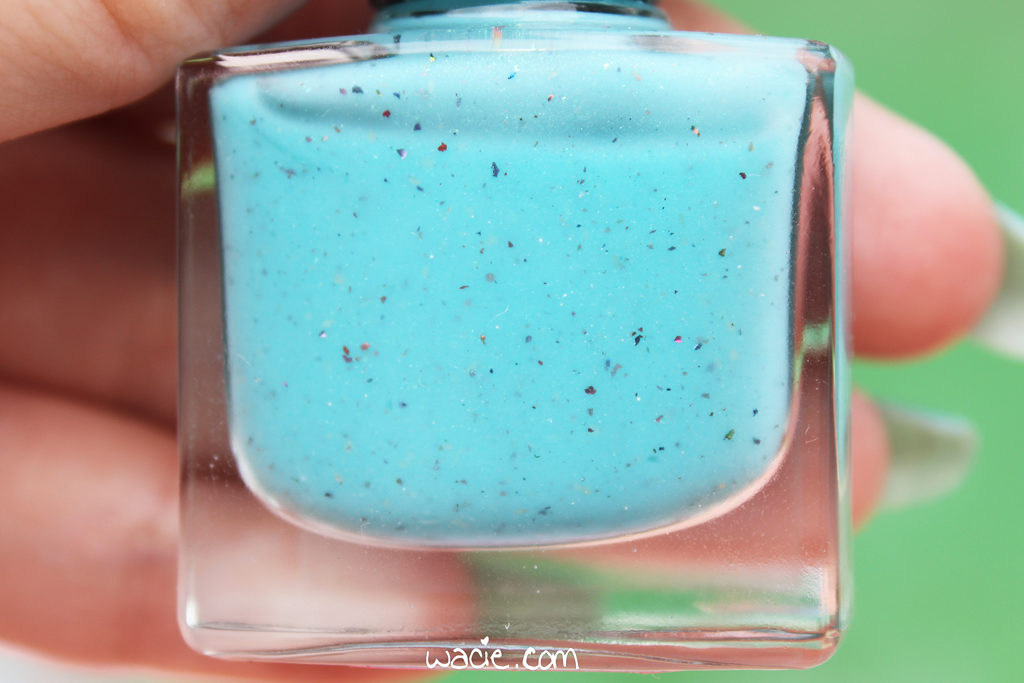 Stream of Enchantment is a sky blue polish with shifting flake glitters. Application was easy; the product consistency was just right. As you can see, it’s on the sheer side, so there’s a lot of visible nail lines (when my nails are this long, I don’t mind it), but it works well with layering the glitters. The polish dries to a smooth finish; I used top coat for extra shine and protection. 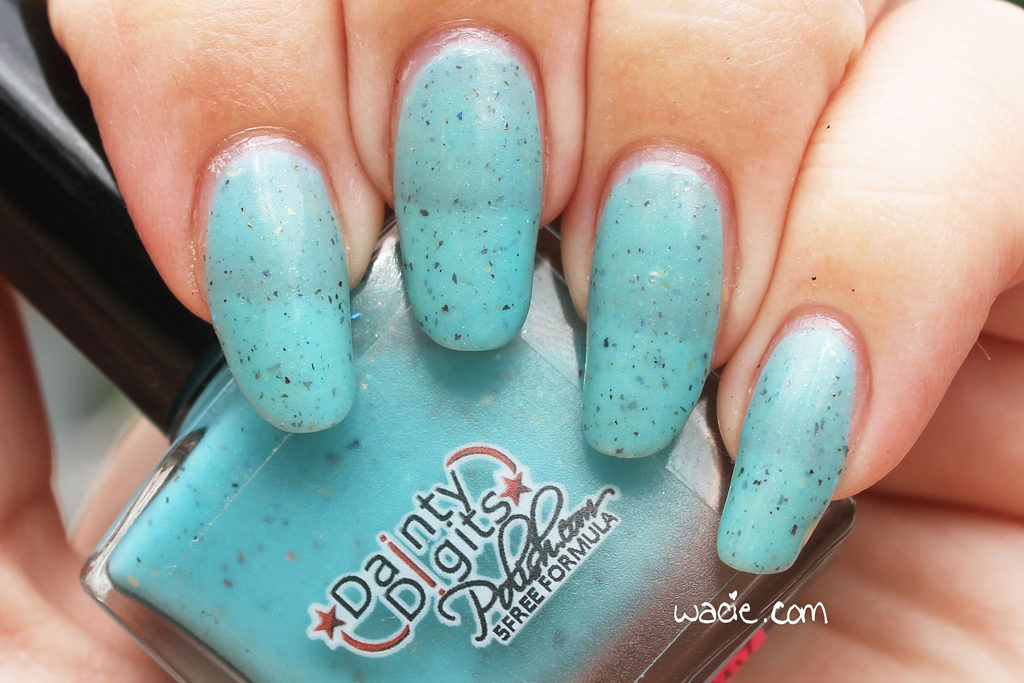 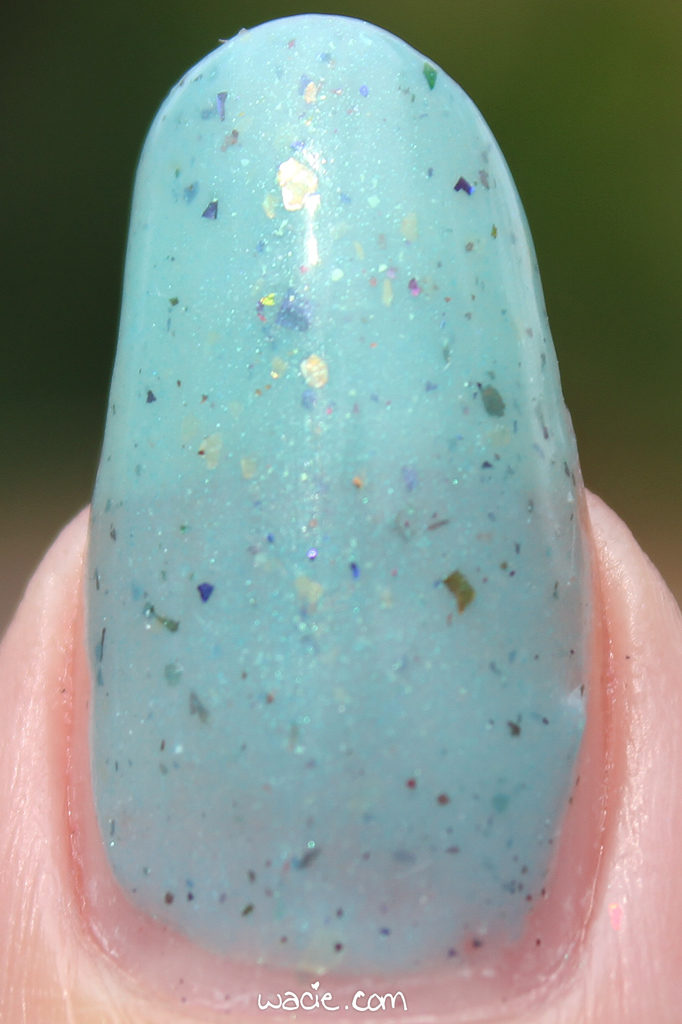 This is my first Dainty Digits Polish! I got to meet maker NeNe at The Indie Shop Atlanta and bought her event exclusives. I love them! She did two different takes on the same polish, a day version and a night version, just changing the base color. This is the daytime version, and it’s so cheerful. I love it. I was hoping the glitters would be bigger, but there’s a lot of them, and the sheerness of the polish helps you see every single scrap of it. This would definitely be a great base for nail art.

Stream of Enchantment was an event exclusive. Dainty Digits is now Baby Girl Lacquer; other polishes can be purchased from their online store.

I bought this polish myself.
I have an extra bottle I’m saving for a giveaway!

Right, so during the month of November, I was insanely busy with starting a new job, starting a volunteer job leading writing groups for National Novel Writing Month, actually writing a novel for National Novel Writing Month, and cooking a Thanksgiving dinner for nine people. Now that novels are finished and Thanksgiving is over, I’ve finally got the time to share the swatches I’ve been collecting. 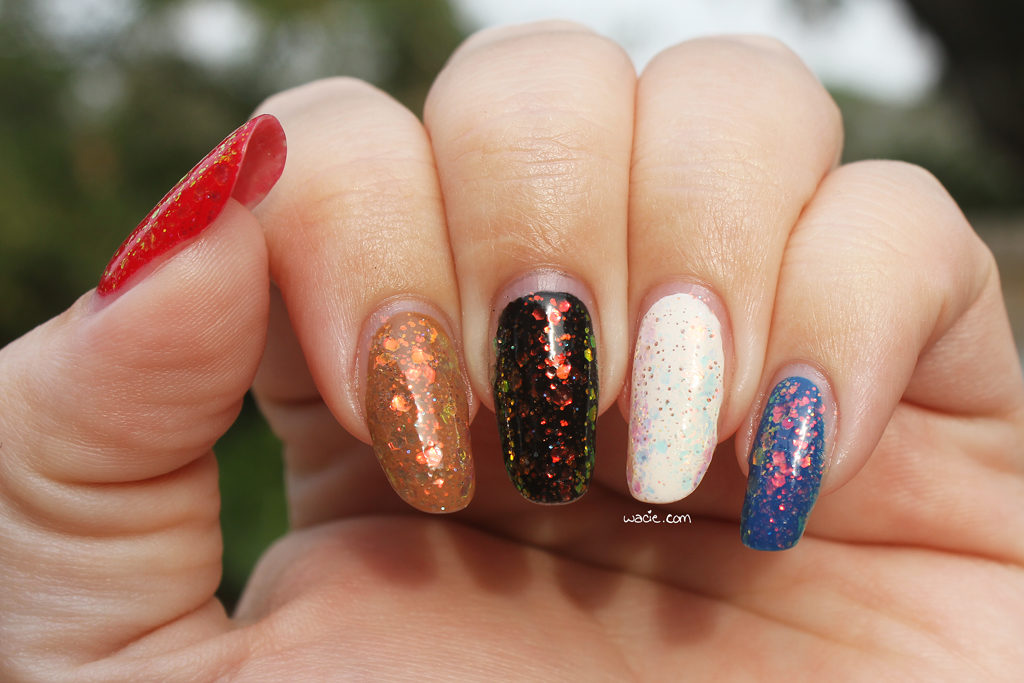 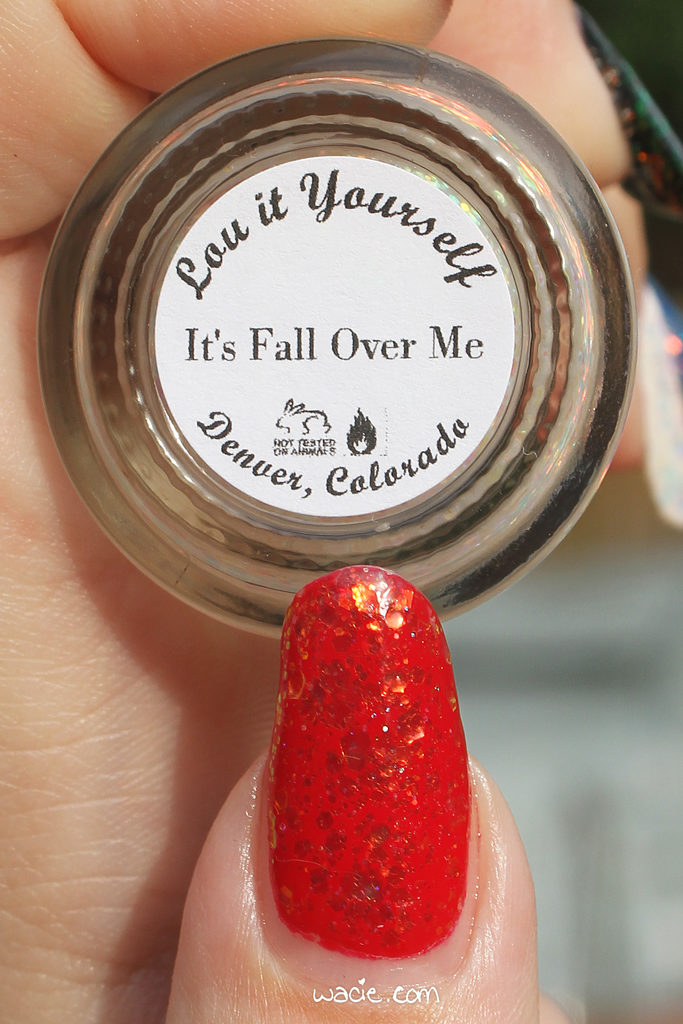 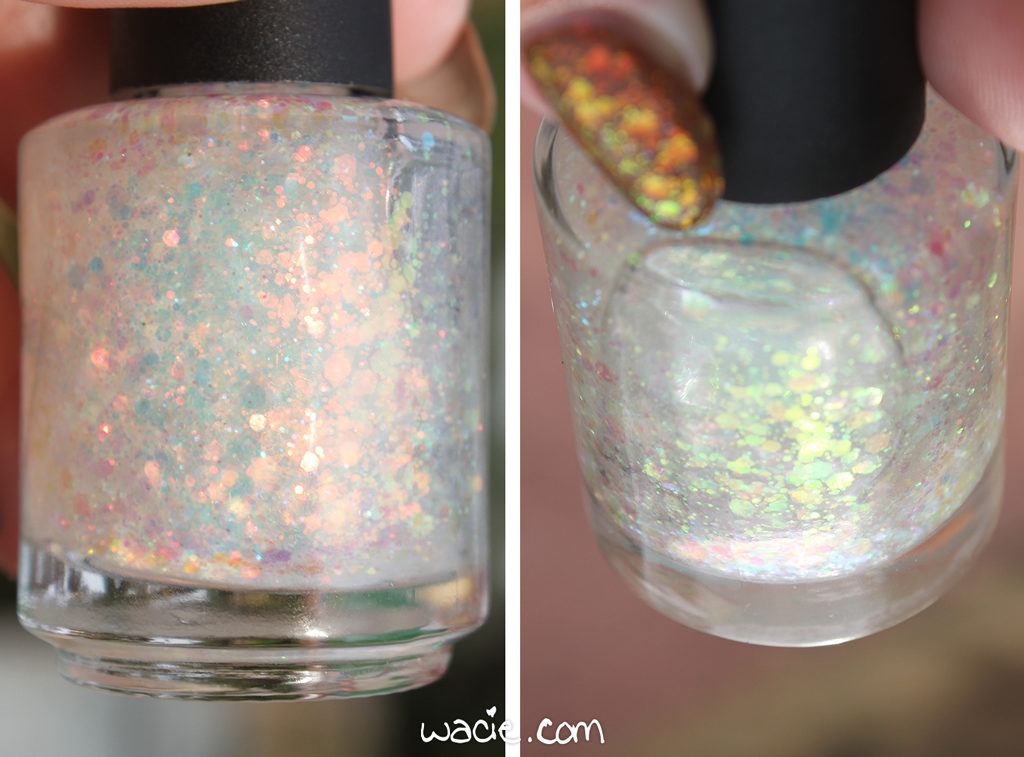 It’s Fall Over Me is a clear-based glitter topper with iridescent shifting glitters of various sizes. The shift is definitely reminiscent of the flakies in Essie’s famous Shine of the Times. Application was easy; the product consistency is wonderful in that it’s not thick enough to be goopy and difficult to use, but it’s not thin enough that it drips off the brush. The glitter delivers very easily, but I definitely wanted more than I got on my first coat, so I used two. In the future, I might try sponging it on to get that heavy glitter coverage without the thickness of multiple coats of lacquer. I used two coats of top coat as well, just to smooth down any glitter texture that was left. 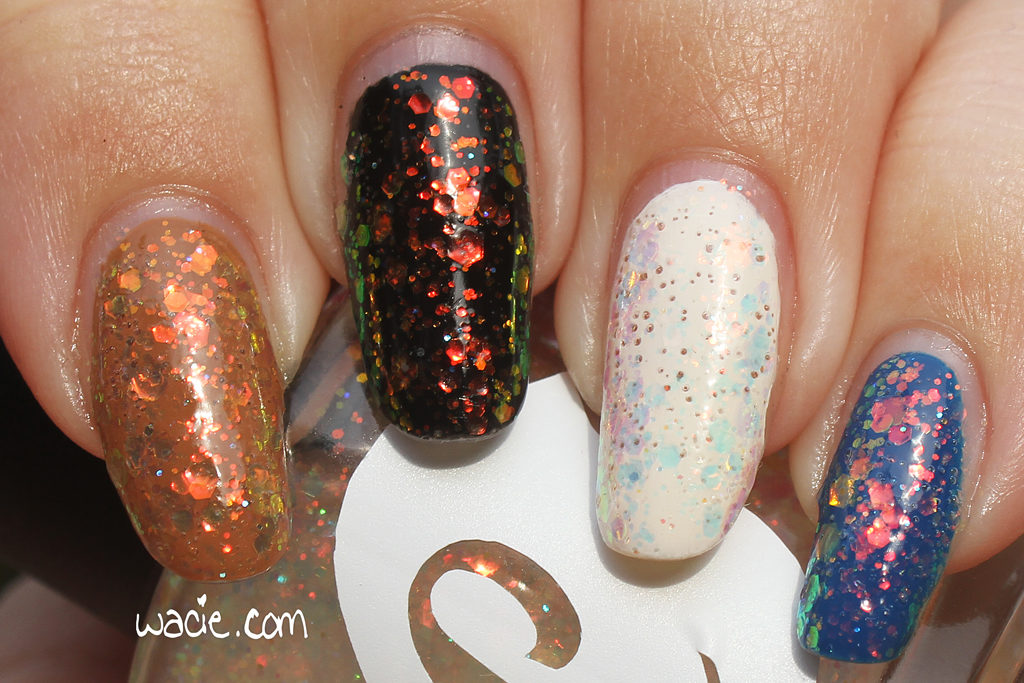 I bought this at the Indie Shop Atlanta, and it had my heart as soon as I saw the bottle. I am such a sucker for these opalescent kinds of glitters, because there’s always something going on with it; it’s the easiest way to give a look dimension and style without getting knee-deep in nail art. It also looks interesting over any color, even white, which is obviously not the ideal undies for this polish, has a unique effect on it. 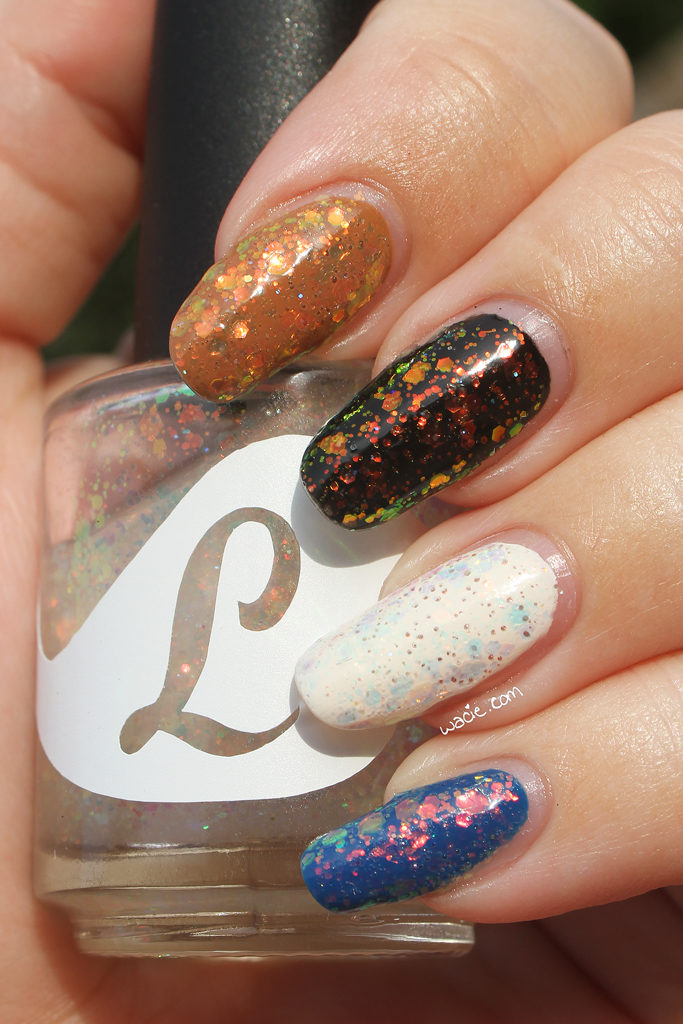 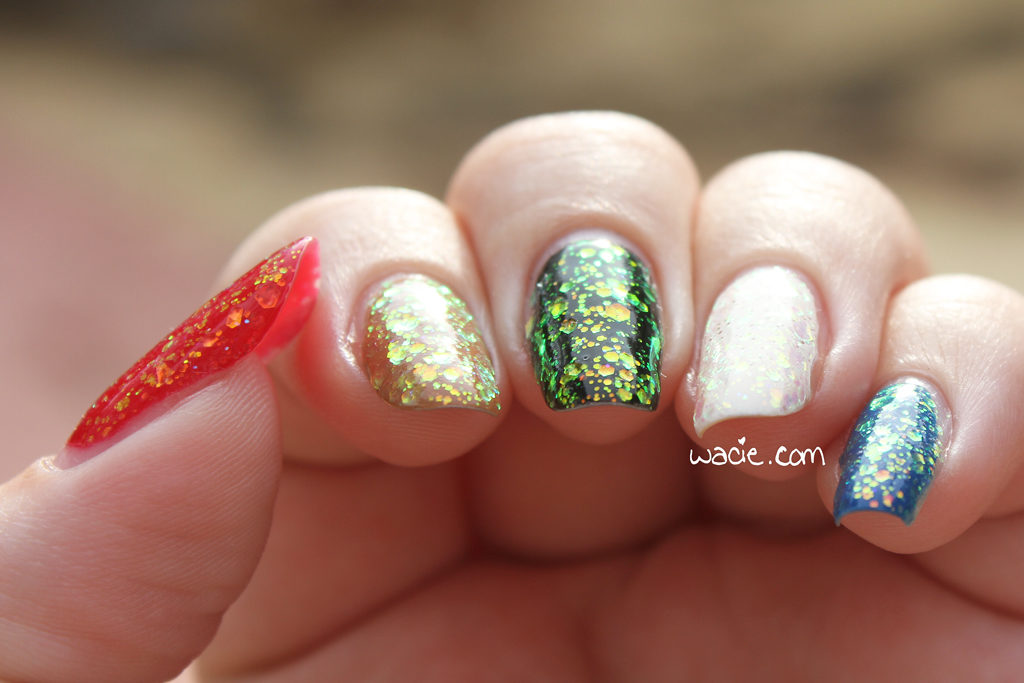 When I was talking to maker Lou at her booth, she told me I had to try it with a matte finish, so I did, and here are the photos of that. I definitely prefer the glossy finish, but I have to admit that the glitter looks pretty cool mattefied. I feel like the matte finish makes the shift a little less dramatic, but it still does happen, and still looks pretty cool. 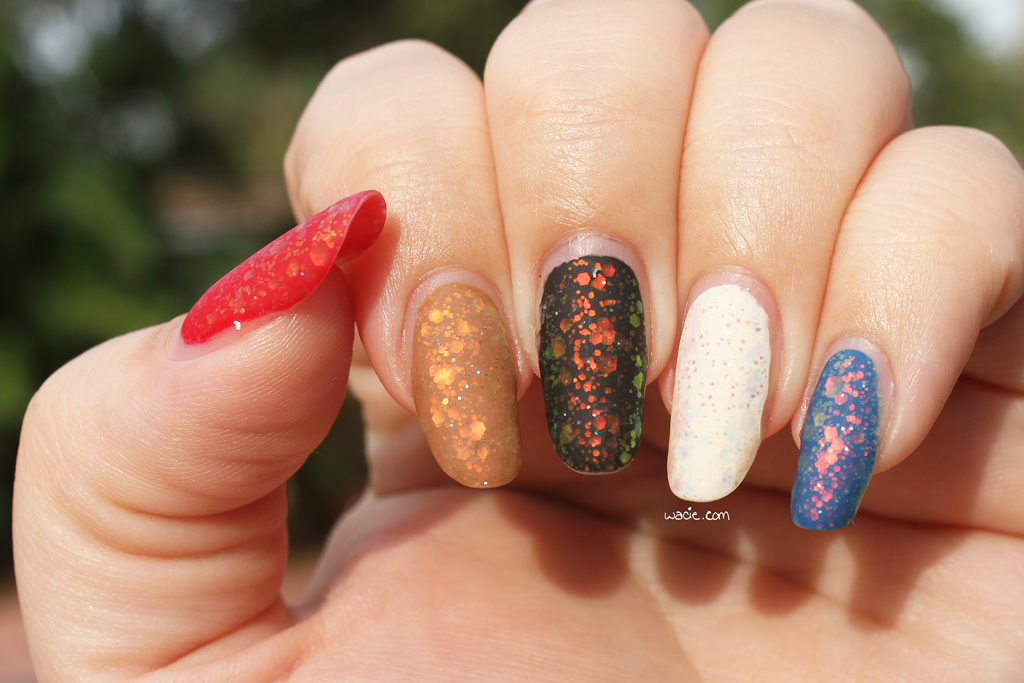 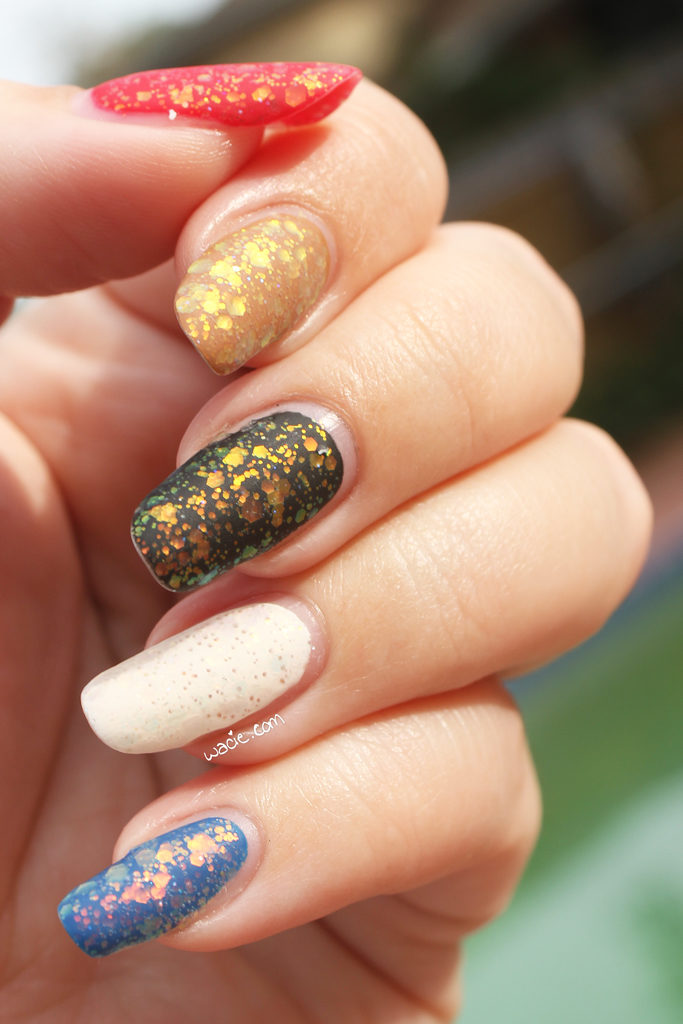 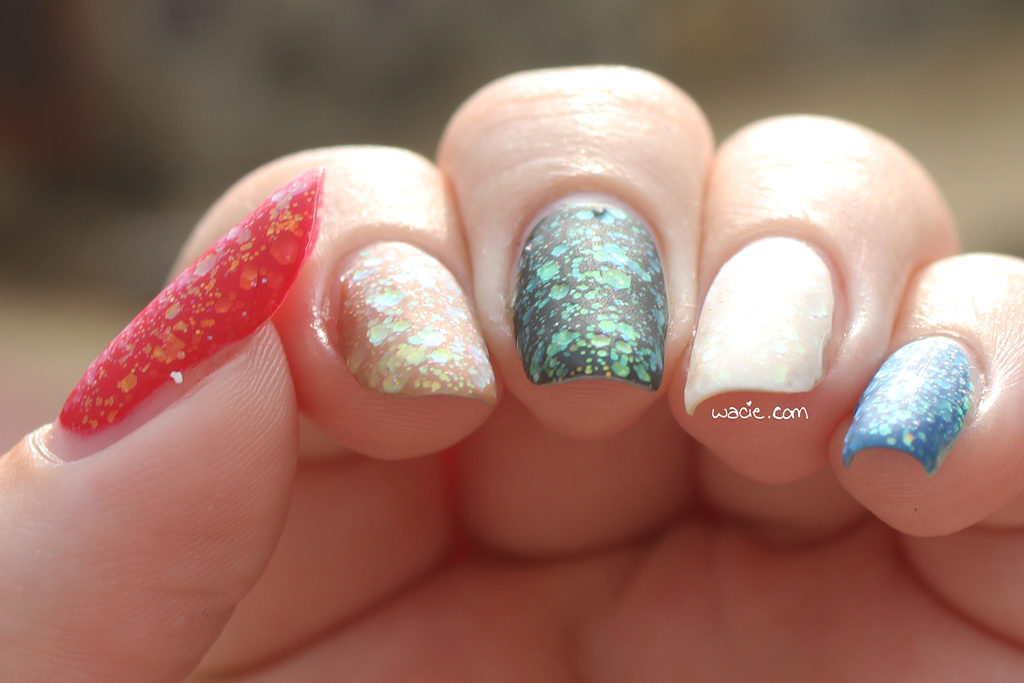 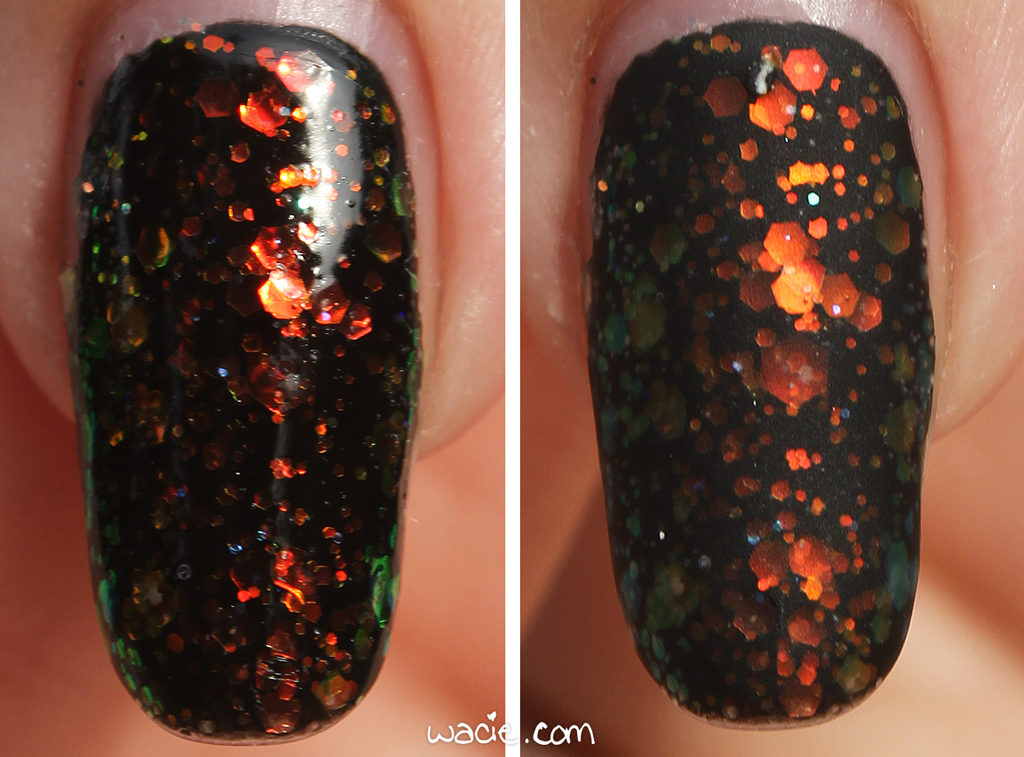 Unlike everything else I’ve shown you from my Indie Shop Atlanta haul, this is a polish you can actually still buy! As of this writing, It’s Fall Over Me is for sale on the Bluebird Lacquer website.

Welcome back to Manicure Monday! You find me today with the shortest nails I’ve had all year. My last break was already devastating (curse you, fitted sheets), and now something else has happened to completely finish them off. This is China Glaze’s Black Diamond and Digital Nails‘s Leviathan. 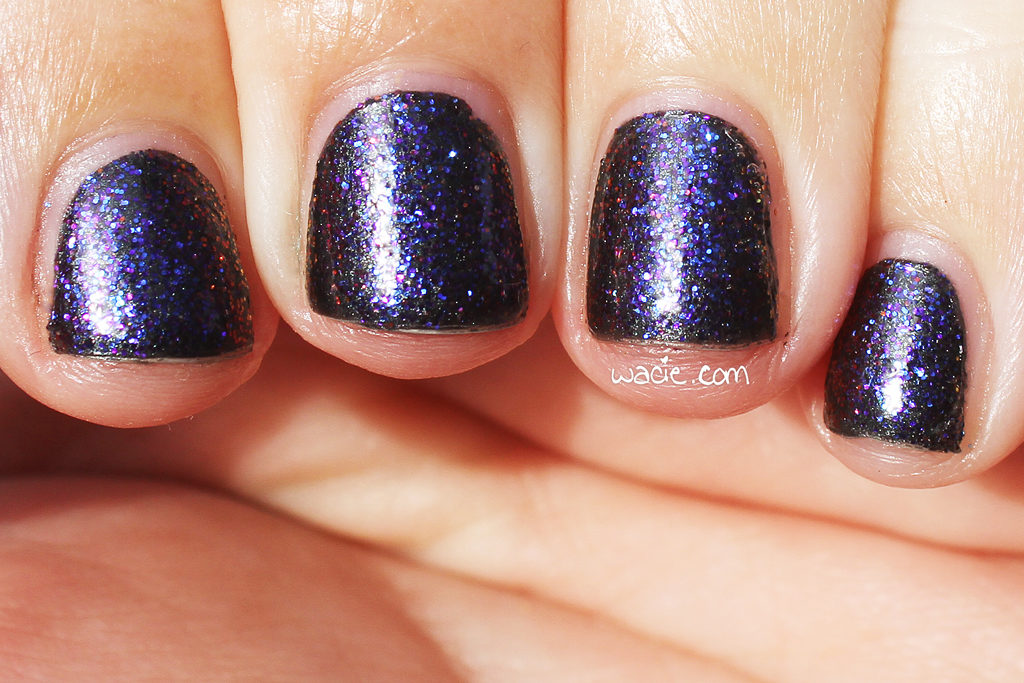 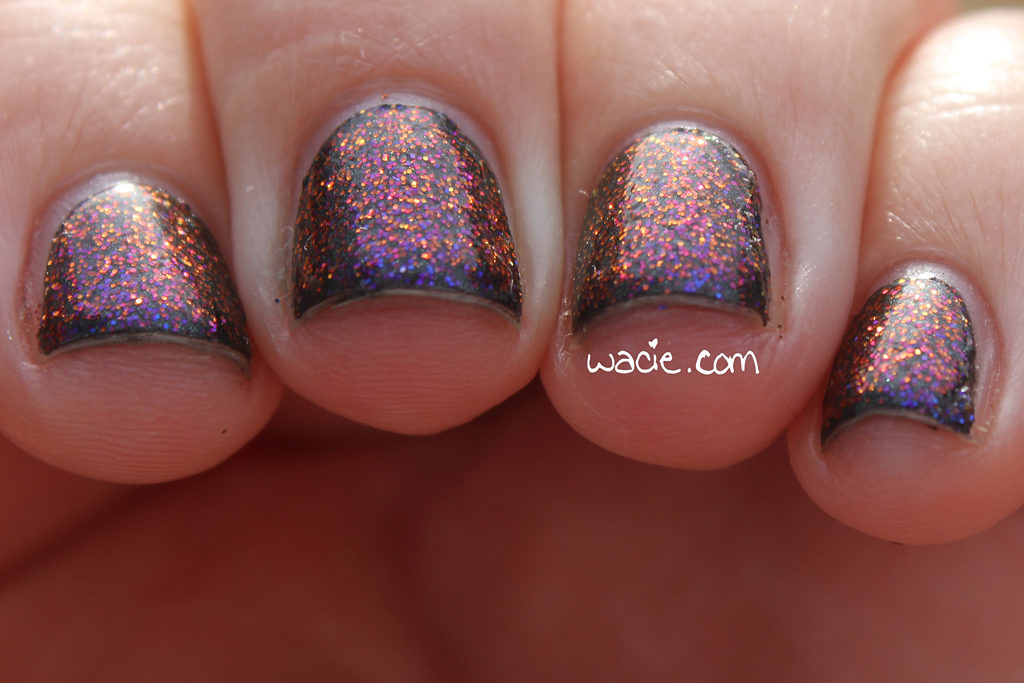 I’ve had these Digital Nails starship glitters forever, and I’m just getting around to being able to appreciate them. They’re beautiful! The shift is just too impressive not to rave about. I realize I am so late to this party, but shifters, man, they’re amazing. 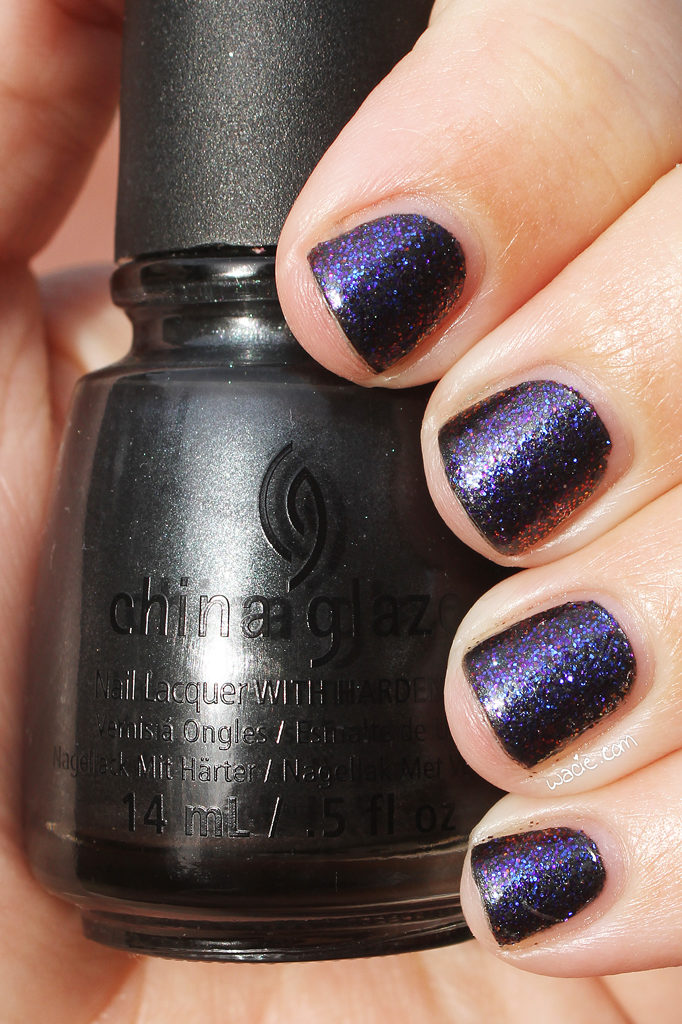 I feel a little bad for Black Diamond, because it’s a lovely polish on its own. It’s got this subtle gunmetal shimmer to it that the glitter completely obscured. I did plan a glitter gradient to get the best of both words, but there just wasn’t room for it on these tiny nails. Glitter wins every time. 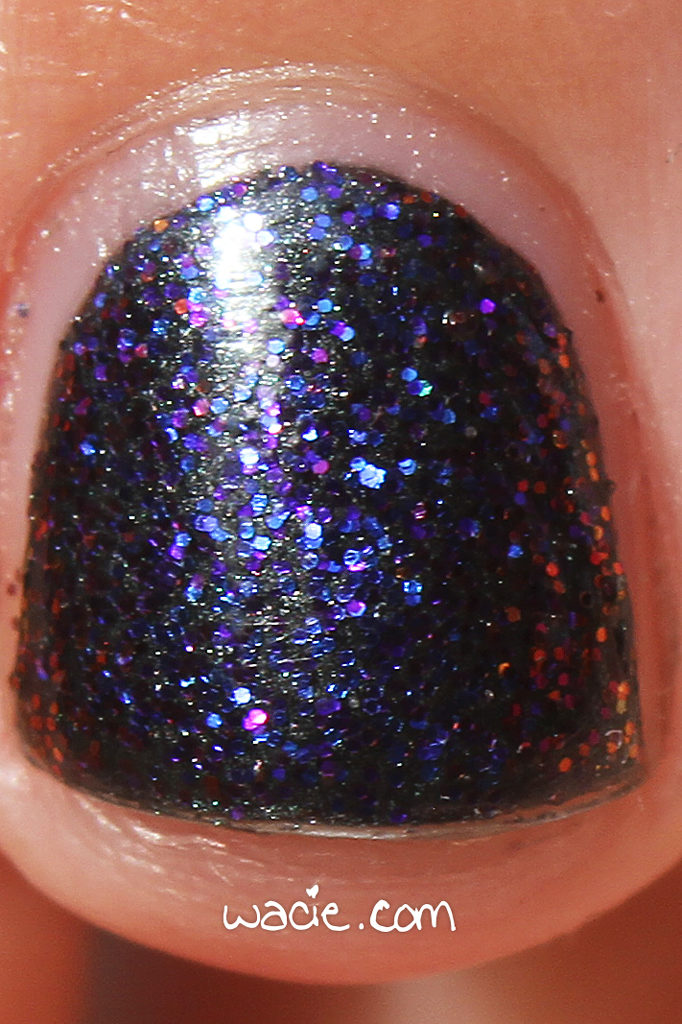 China Glaze is sold in stores; I got this particular bottle at Sally Beauty Supply. Leviathan and other Digital Nails polishes are available on etsy, though they’re currently closed.