Welcome back, reader! I’ve been slacking on my swatches, but I’m still working on them. Today I have a glitter topper someone once told me was “terrifying” because it looked difficult to remove. This is Demolition from Formula X for Sephora; I’m wearing one thick coat (basically two) over Marc Jacobs Beauty’s Shocking (pink), Butter London’s Tea and Toast (taupe), Blue-Eyed Girl Lacquer‘s Lighthouse by the Lake (blue), a nameless vintage Maybelline (brown), and Sally Hansen’s Sun Kissed (orange). 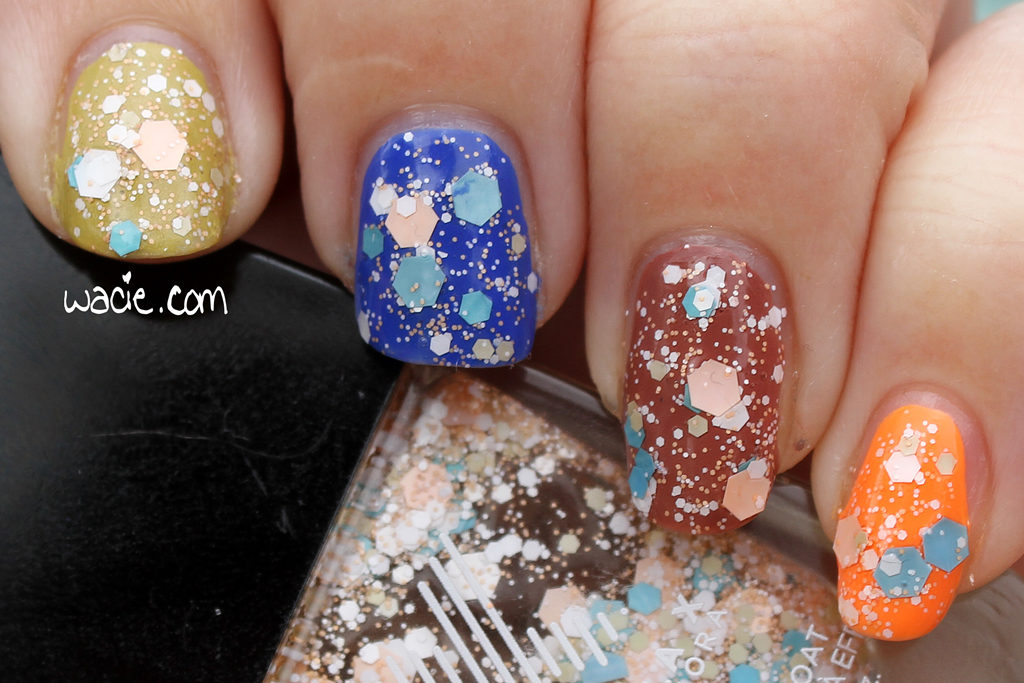 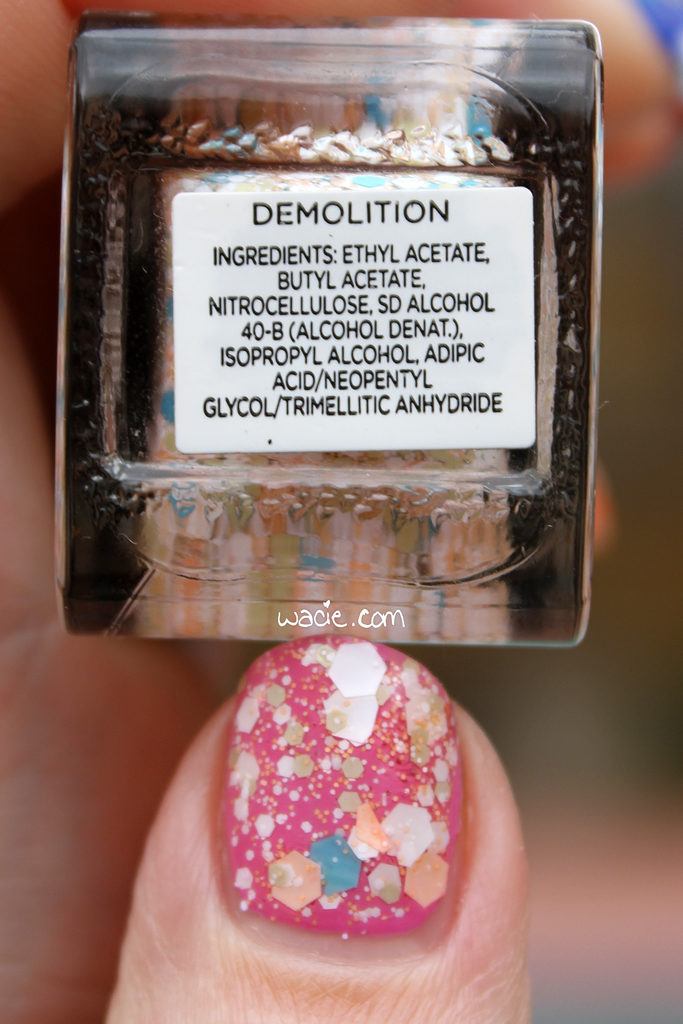 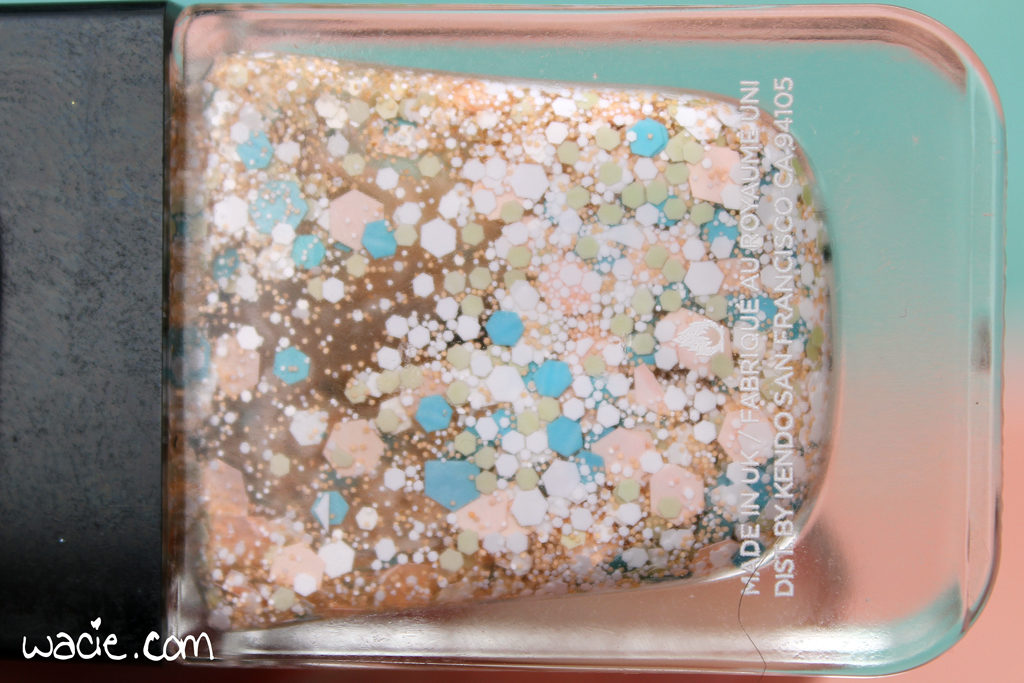 Demolition is a clear-based glitter topper; the glitters are hexes of various sizes and pastel shades, which focuses largely on pastel pink. Application was good; the polish consistency is a little on the thick side, which is necessary to carry these chunky glitters. It dries quickly, though, and with a somewhat textured finish; top coat is definitely required for a smooth-to-the-touch finish. 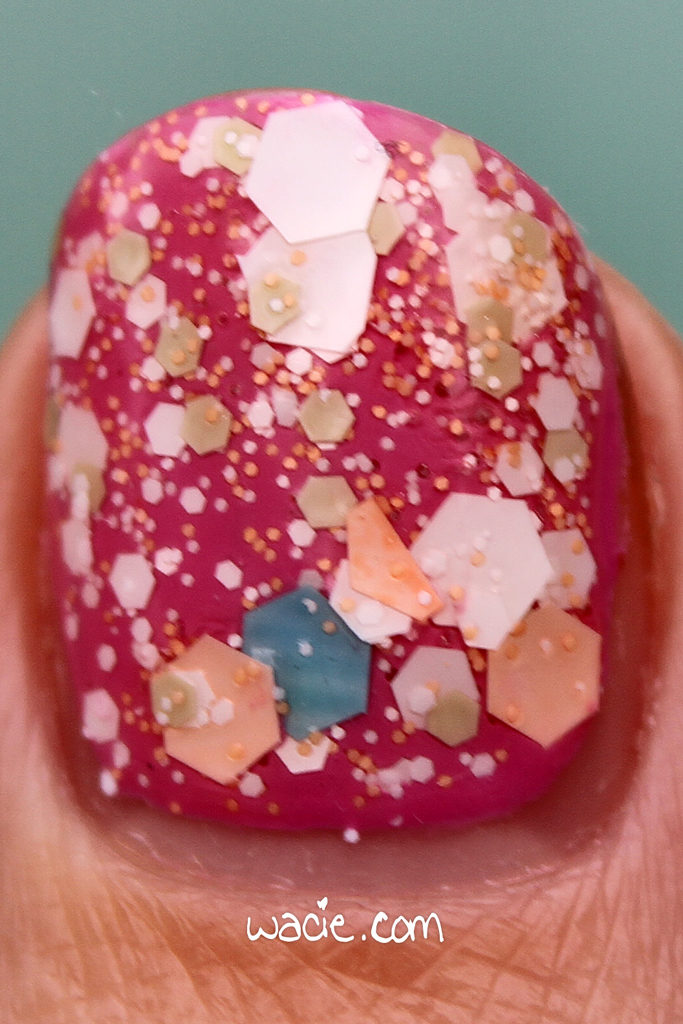 I know these chunky glitters have fallen out of style, but I am still about them. I was super excited to find a polish like this from a mainstream brand as well; they had several color variations on this formula and I bought several of them. It wears pretty well despite being on the thicker side; a lot of heavy glitter toppers like these are quick to chip, but not this one. My only real complaint is that it takes quite a bit of top coat to smooth it down.

The Formula X brand was discontinued by Sephora. 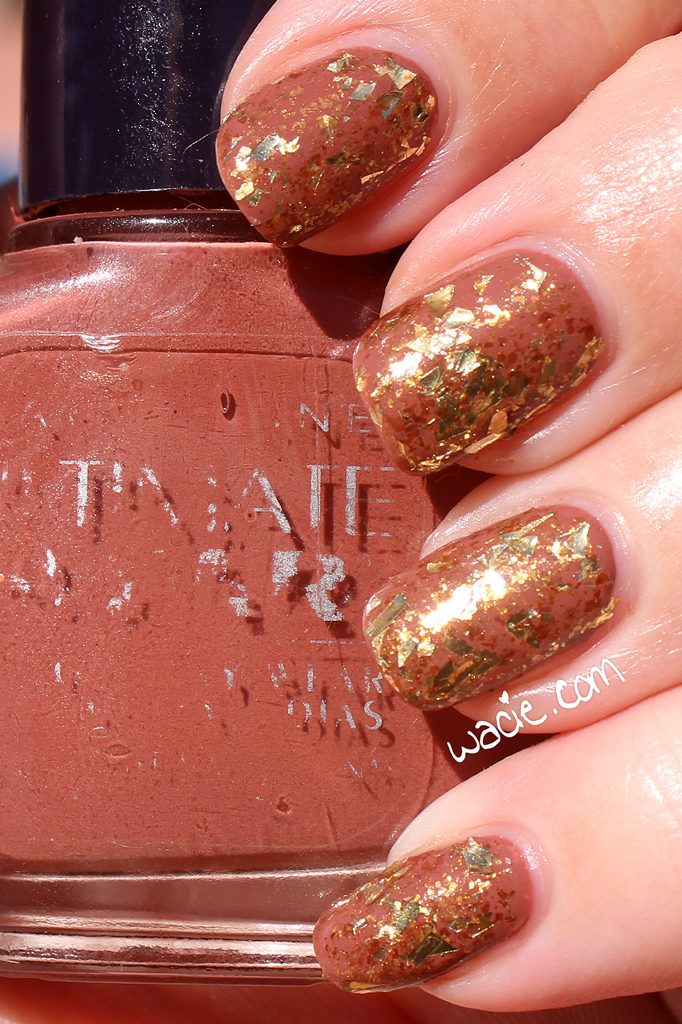 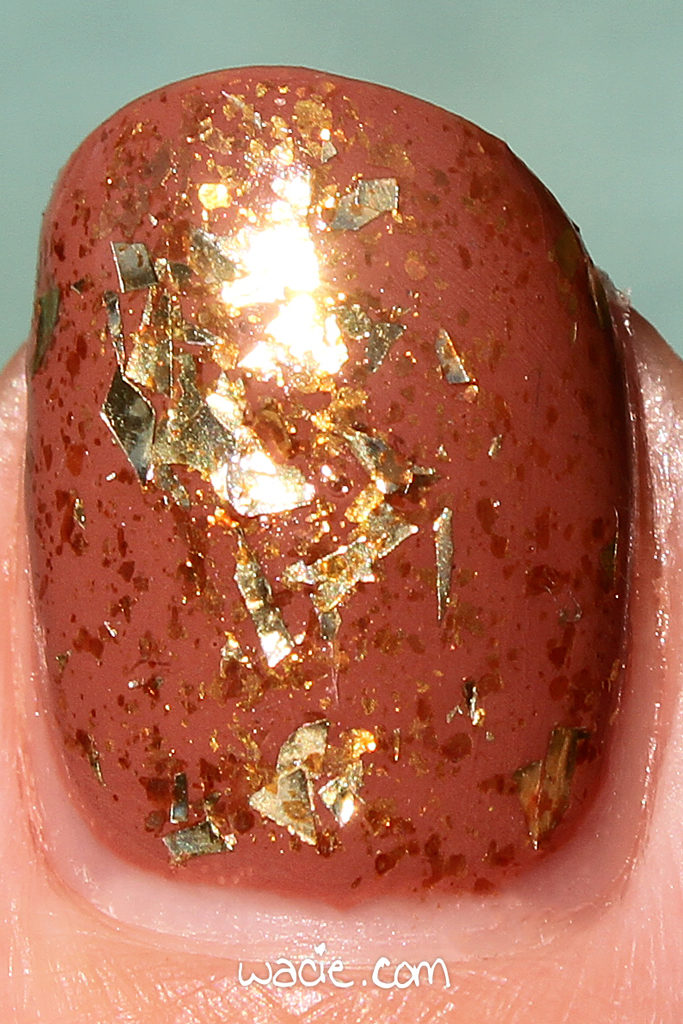 Happy Monday! For this week’s look, I have yet another red and gold look. I couldn’t help it, the combination was just so perfect. This is LA Colors’s Animated with Formula X for Sephora’s Voltage. 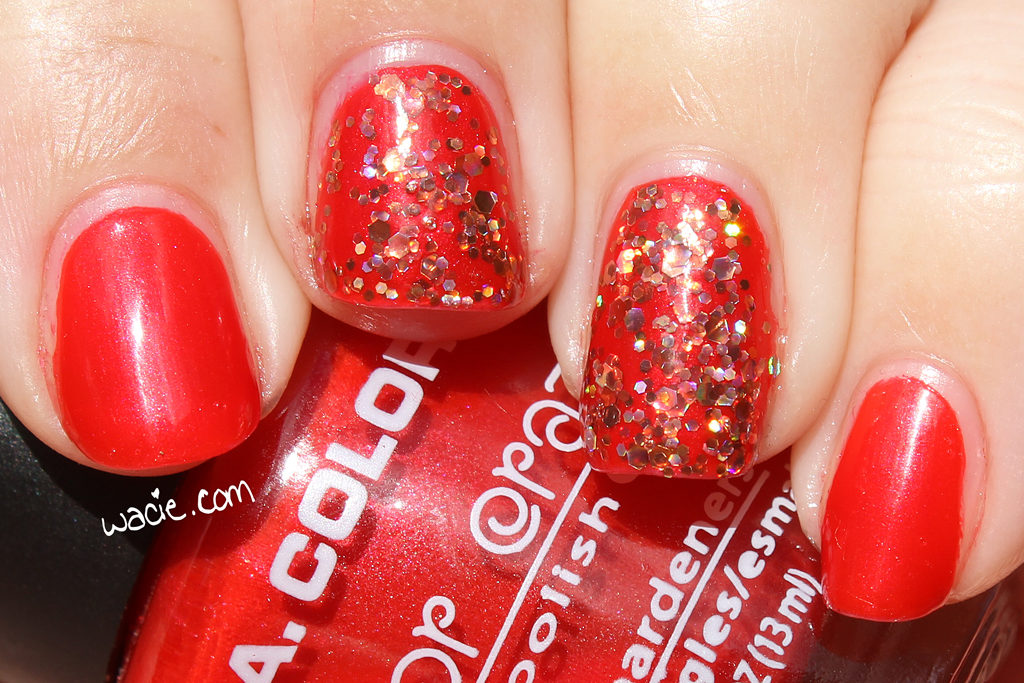 Animated might be one of my favorite polishes. Every time I wear a red polish on the blog, I always talk about how I love red polish, and this one’s no exception. I bought it to be yet another red creme in my collection, but the tiny shimmer in it makes me smile whenever I see it. This is one of the best dollars I ever spent. 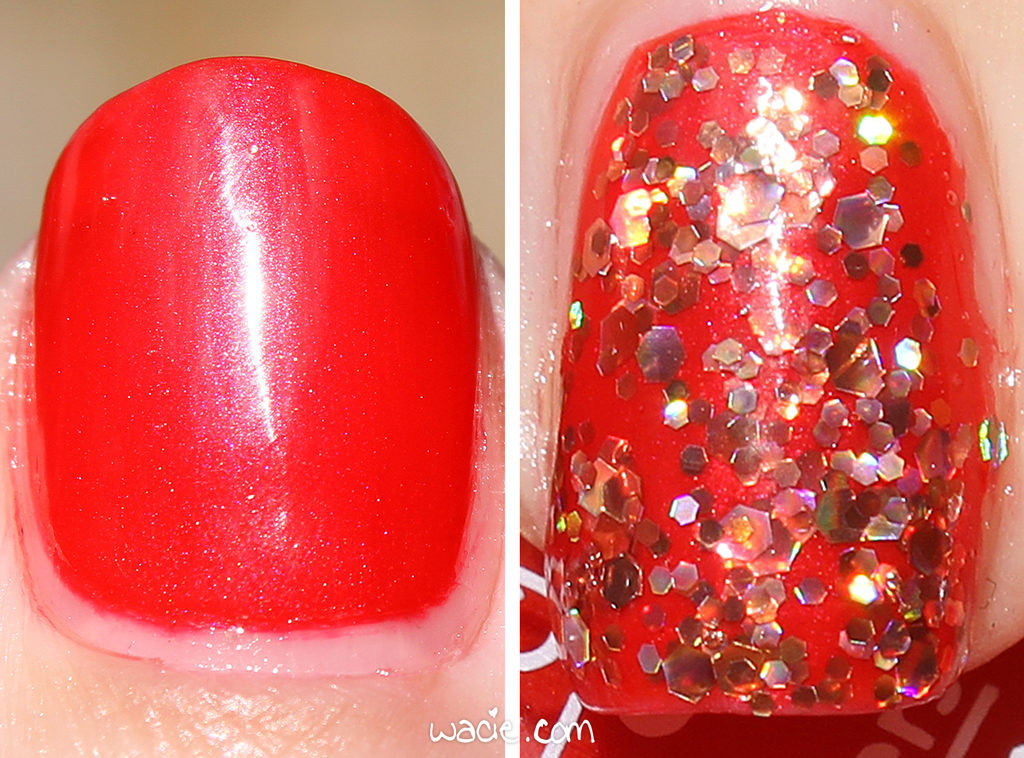 Voltage is a souvenir polish; I bought it from the Sephora in Times Square. It’s a gold glitter polish in a thin red jelly base, which made it the perfect companion to Animated. I used two coats of Voltage here, not only for the extra glitter, but to made sure it got some of that jelly effect. I’m not sure it worked, but I like the look.

LA Colors is sold in stores. Formula X can be found on their website.

Happy Monday, reader! Happy Tuesday as well, if applicable. My look today is one I’ve been looking to try for a while: matte glitter sandwich with glow in the dark polish! It doesn’t translate well to photos, and looks a bit weird. I really regret that, but it looks cool in person, so I’ll need you to trust me on that. Also, this is probably the last manicure of my twenties. Yeah. I turn 30 on Saturday, and I’ll do a birthday mani then. Until then, this will carry me through the rest of the week. The last week of my twenties. I already feel as though the sun is setting.

Anyway, the sandwich I have here is made with Formula X for Sephora’s Firecracker and American Apparel’s Jupiter, topped with one coat of Seche Vite top coat. 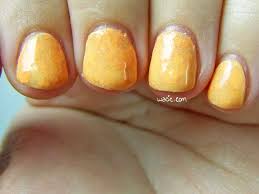 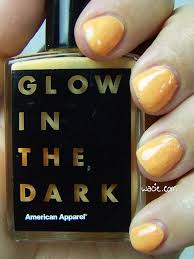 The first thing you’ll notice about this manicure is that’s really orange. The color comes mostly from the glitter. Jupiter has some color of its own, but it’s sheer and not immediately visible. What Jupiter does here, though, is assimilate each individual speck of glitter into one orange entity. Only the large glitters still have definition; the finer glitters look like grit or bubbles in the color, at least in photos. It’s not that bad without the bright studio lights bearing down on it. 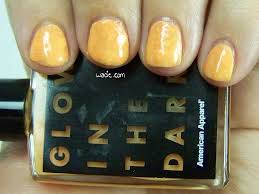 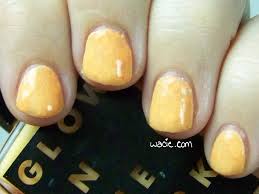 You may also notice the polish looks quite thick. That’s very accurate. In all, I have seven coats of stuff on my nails. Apart from base coat and top coat, I have two layers of Jupiter, the glitter, which is about as thick as two coats, and two more coats of Jupiter. Firecracker is a pretty chunky glitter, so Jupiter acts as a smoother here as well as a color; my nails are totally smooth to the touch. They are, however, one step away from being gumballs, and I acknowledge that. 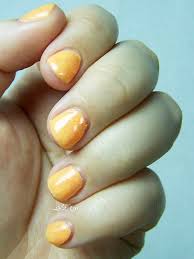 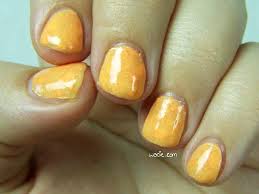 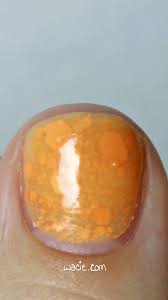 One last thing: I tried a real macro shot! I got a new phone with a pretty nice camera, and thought it was worth a shot. If you’re reading this, you’ve scrolled past it, but there it is. You can really see what I mean about the glitter losing its definition. It looks like it’s out of focus because the lines of the glitters are blurry, but it’s really just the sandwich blending it in. 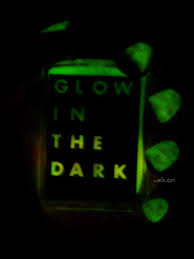 Firecracker is from Sephora. Jupiter is from American Apparel.

It’s another weekday swatch! This is the last one until I’m caught up. Pyrotechnic from Formula X for Sephora is the last of my red manis from last week. I’m wearing three coats with one coat of Rica‘s Glossy Glam top coat. 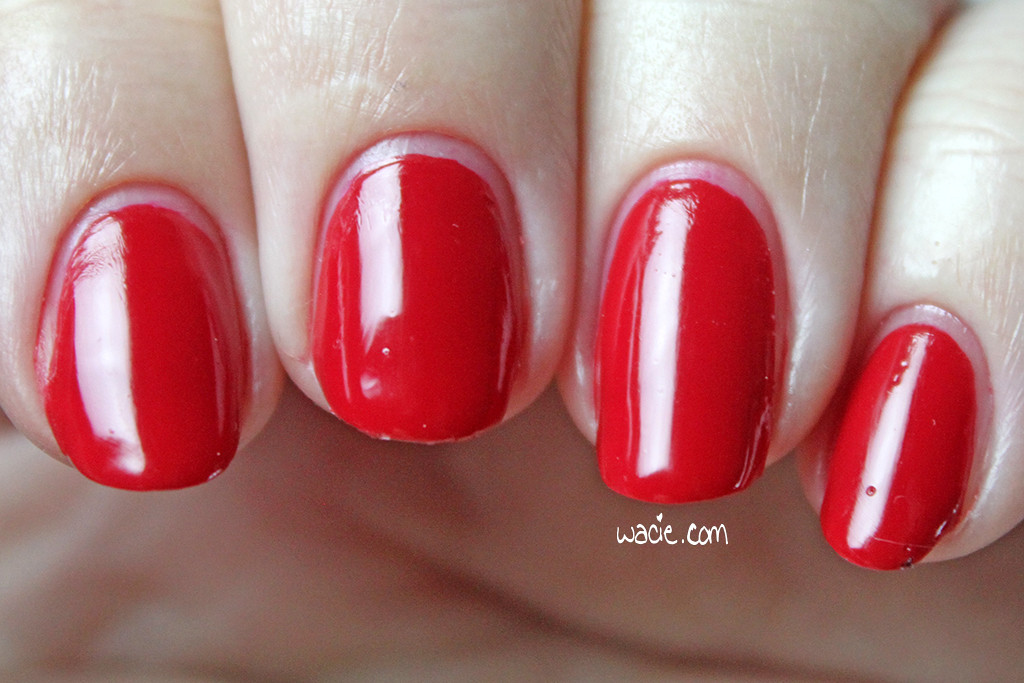 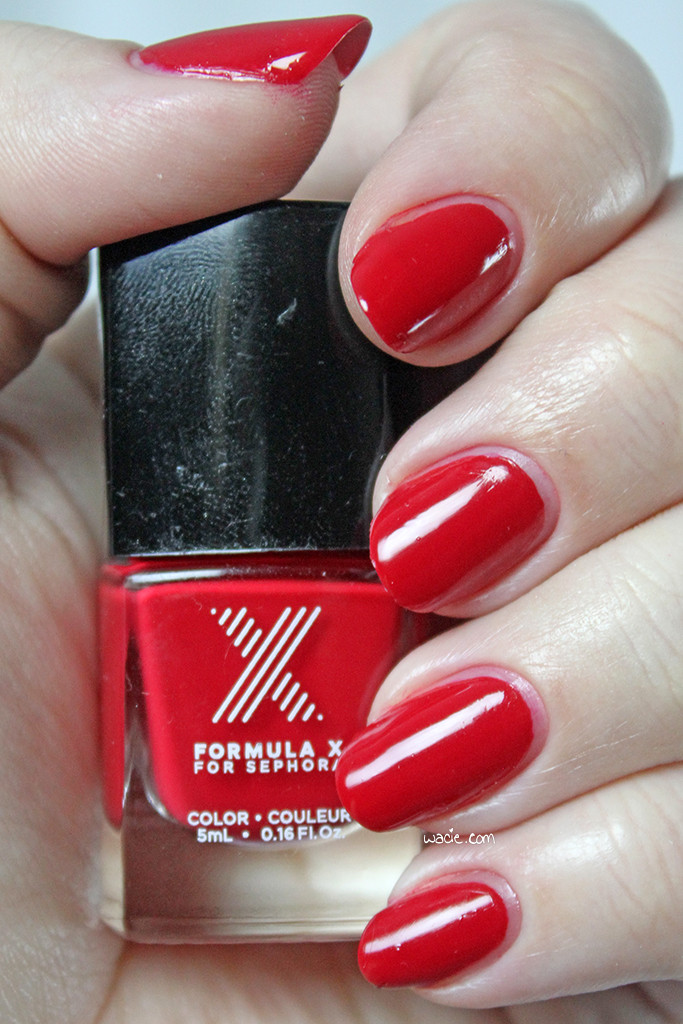 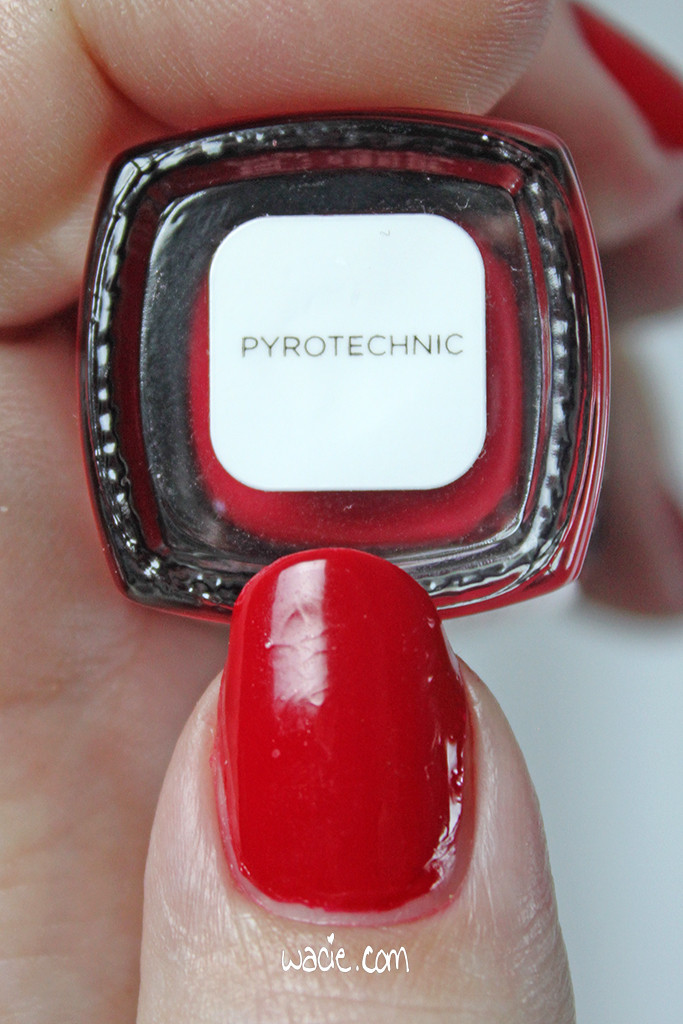 Pyrotechnic is basic red creme. It was easy to apply; the mini brush was just the right size for my small nail beds, but the square top was hard to hold at times, and though it comes off, the small brush cap underneath wasn’t any more comfortable. The polish itself is a nice consistency, on the thinner side, but still easy to work with. The first coat can be sheer, but coverage builds with multiple coats. It dries with a glossy finish, and with good drying times. 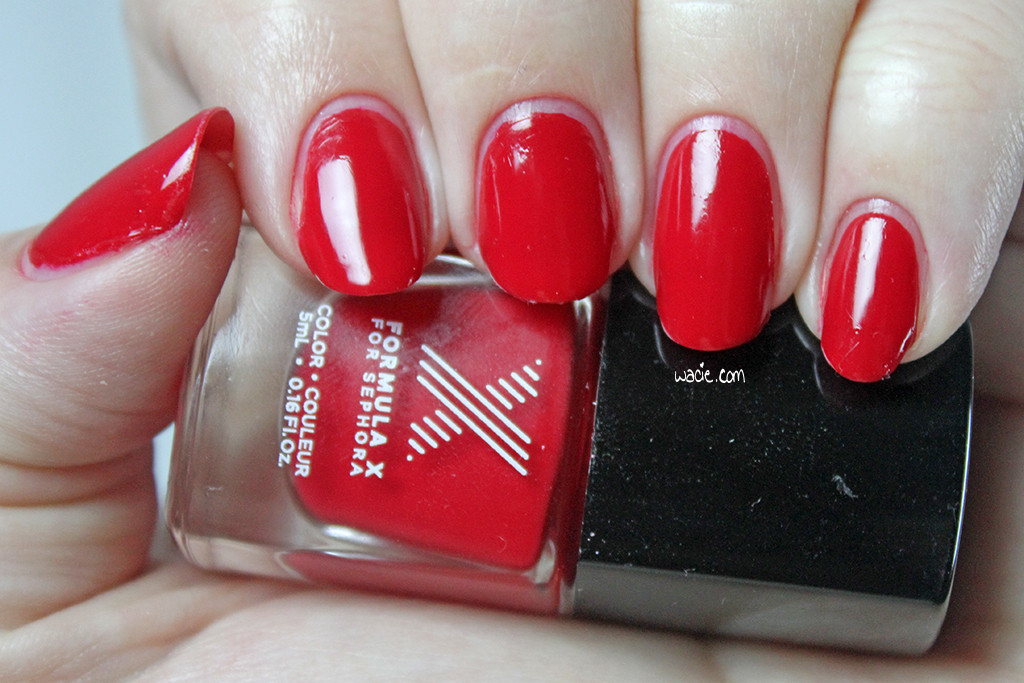 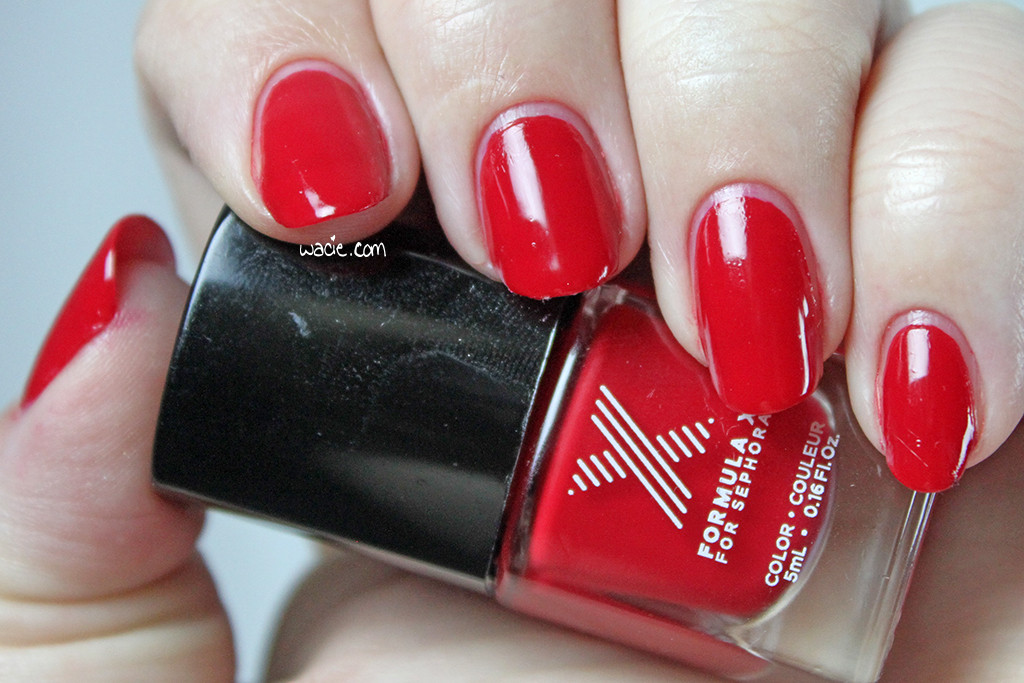 I got this mini of Pyrotechnic as a 100-point reward from Sephora. I love red cremes to death, but I rarely buy them because I have so many already. At this time, the Formula X polishes were just coming out, and because I was curious about them, I went for it. Compared to Sephora by OPI, I don’t really think they’re much different. I love the bottle and packaging, and I definitely like it better than Sephora by OPI’s weirdly-shaped bottles, but I think the polish itself is pretty comparable. Also, I’ve said it before, but I’ll say it again: if you’re really in the market for a red creme, this might be a nice one to have, but if you don’t want to drop ten dollars on a nail polish, it’s totally fine to look elsewhere. 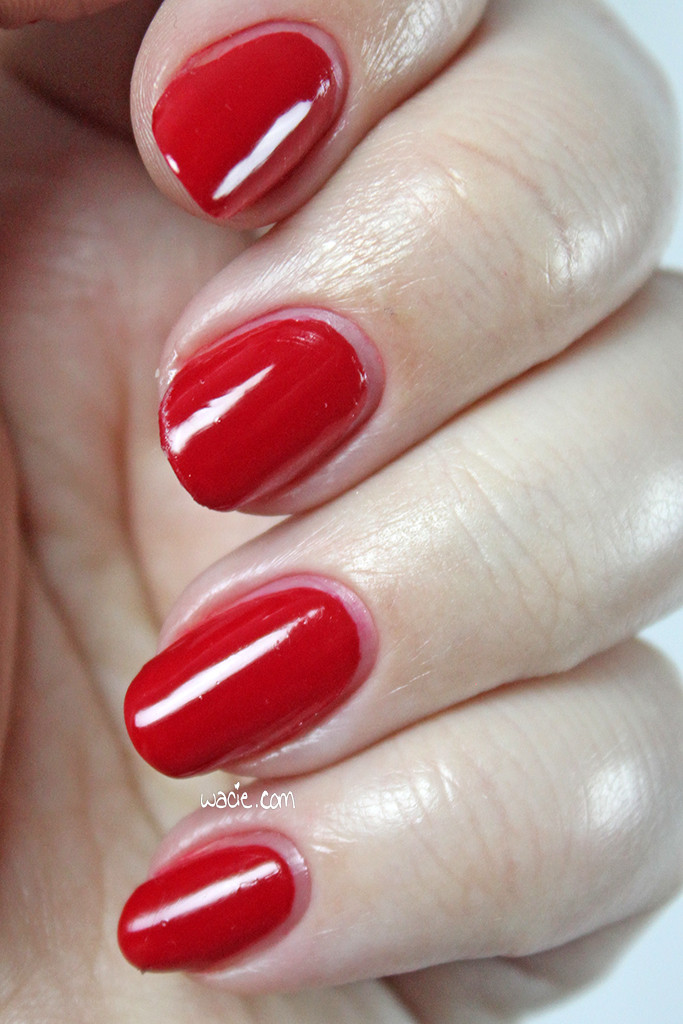 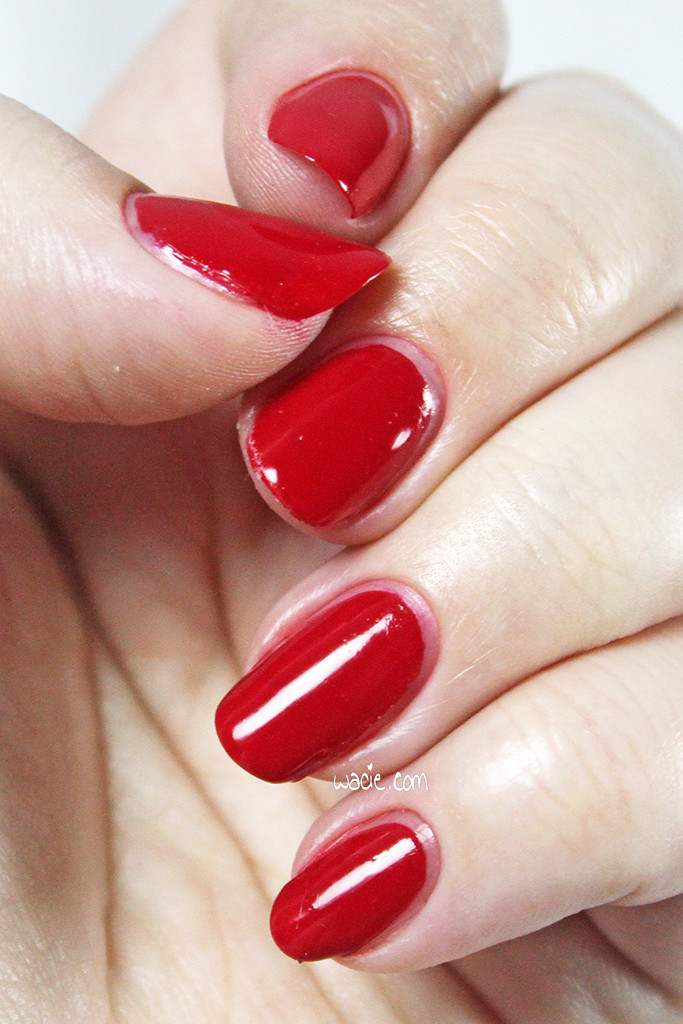 I admit that this mani looks a little rough. I did it Friday night, I think, at 1:30 in the morning. I’d spent the week working a booth at a trade show, and by Friday, I was a few days in and still had a few days to go. It was a rush job; I was exhausted and I was trying to get my nails done as quickly as possible so I could sleep. It’s only now that I’m seeing the pictures do I realize what a crap job I did. I mean, they looked great in person, but the pictures just make it look sad. The stained cuticles in particular, I promise they weren’t really that red. That’s all on me and my sleepiness and not the polish’s fault.

Pyrotechnic is available from Sephora and sephora.com. 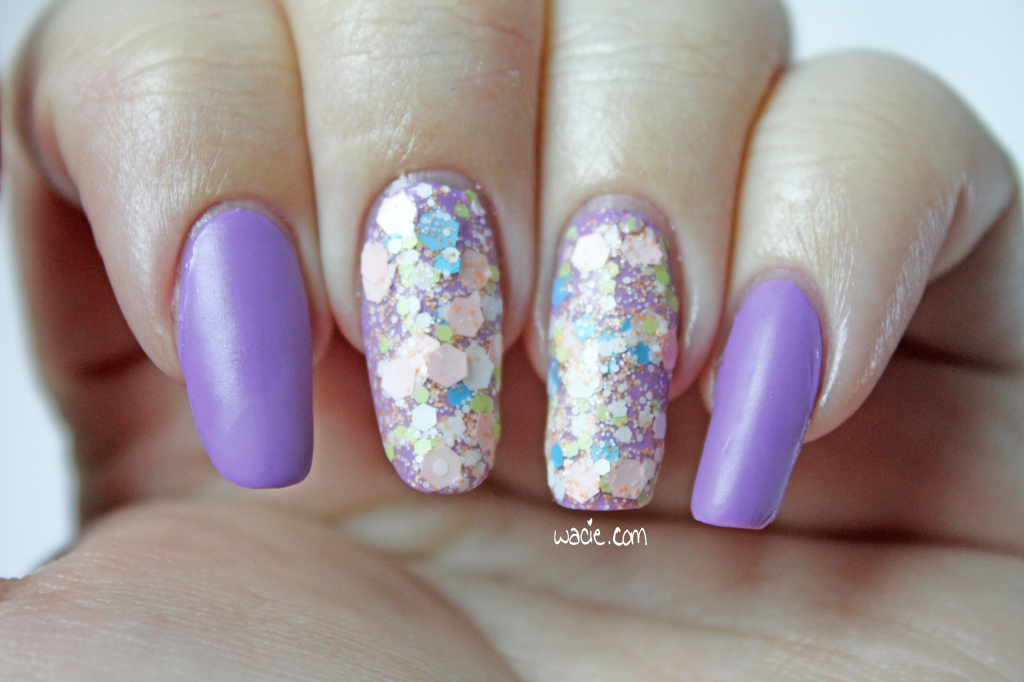 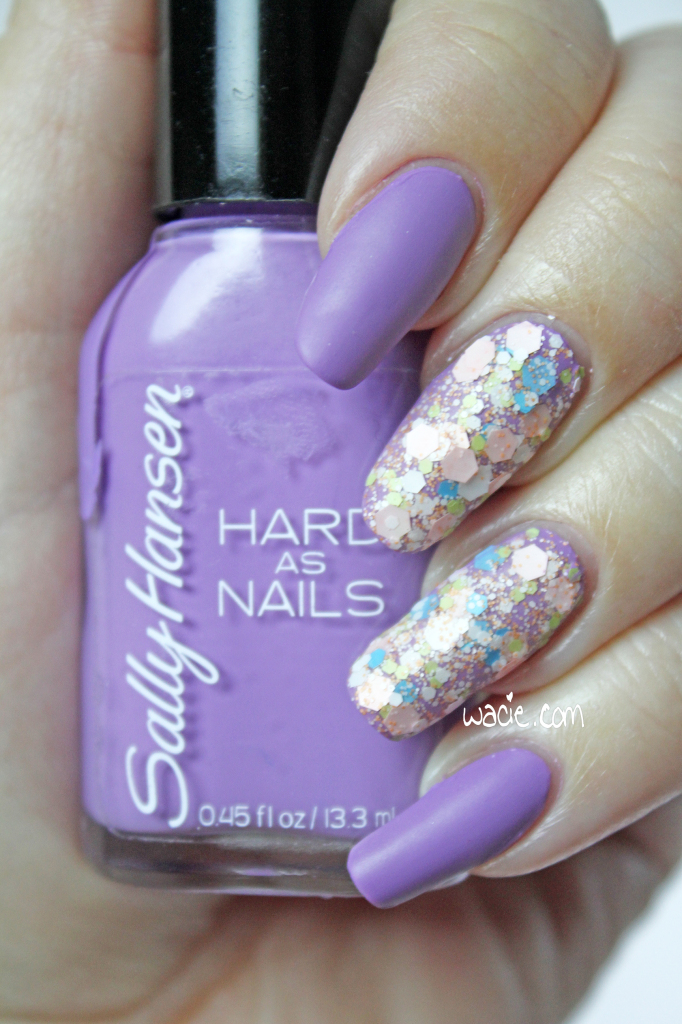 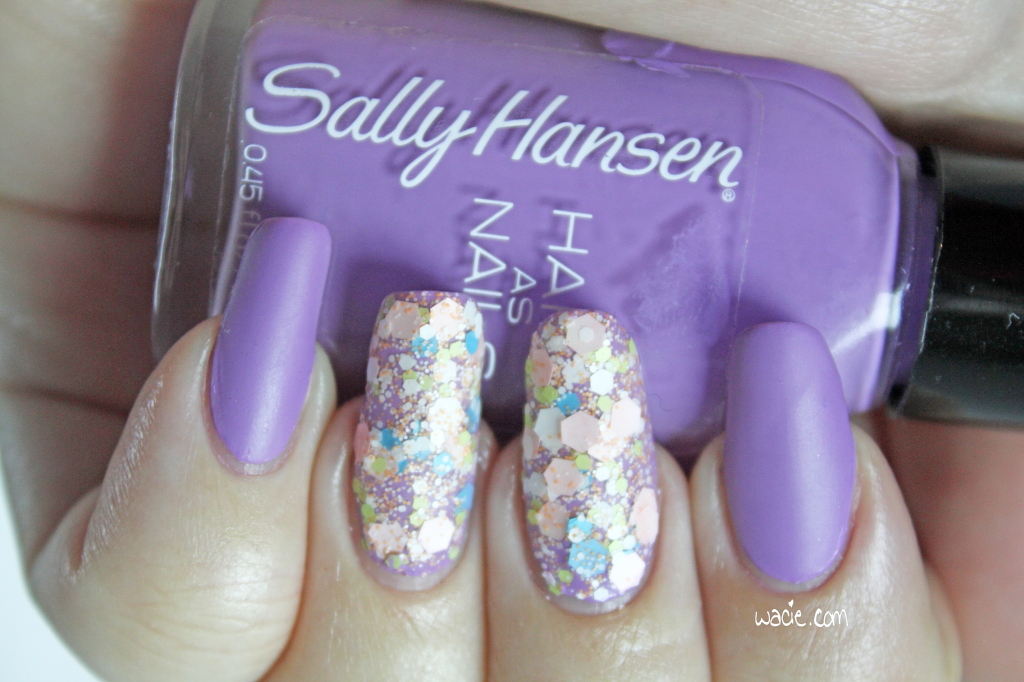 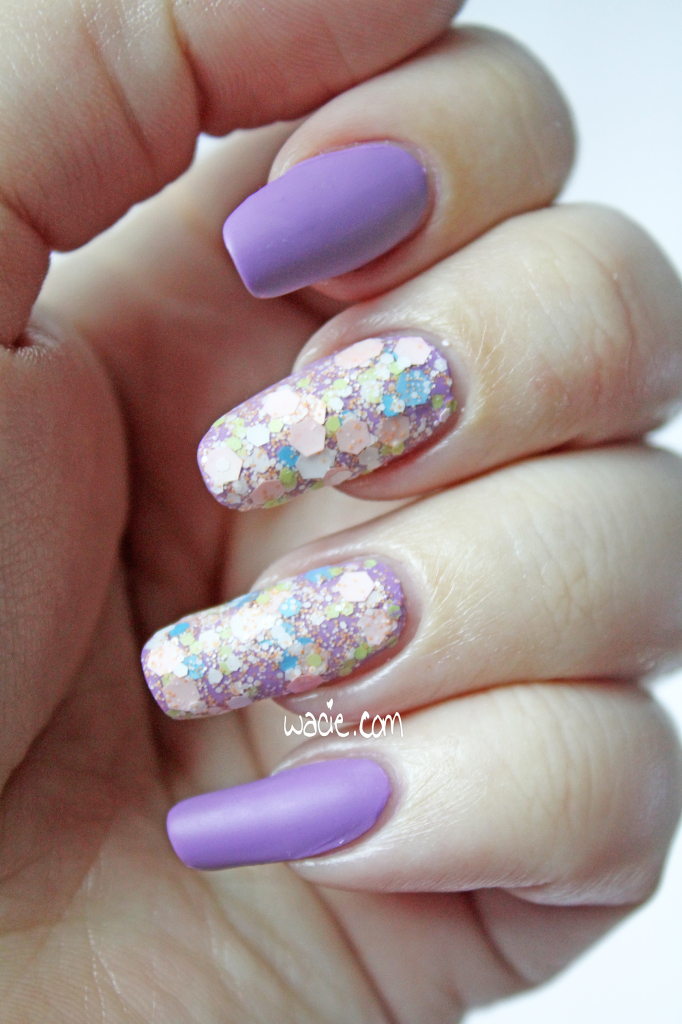 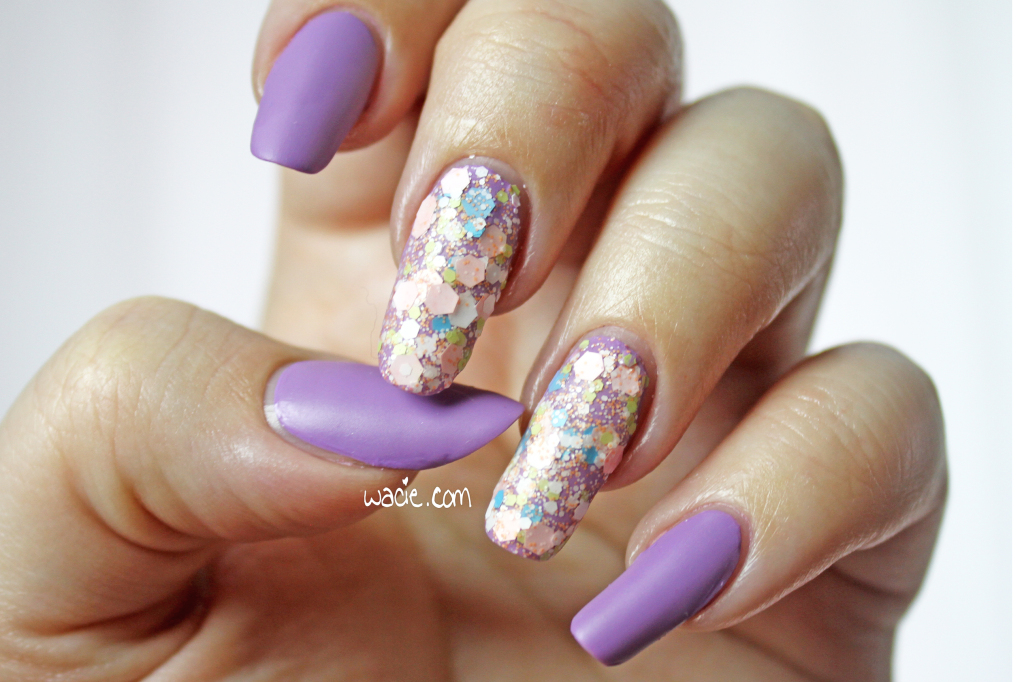