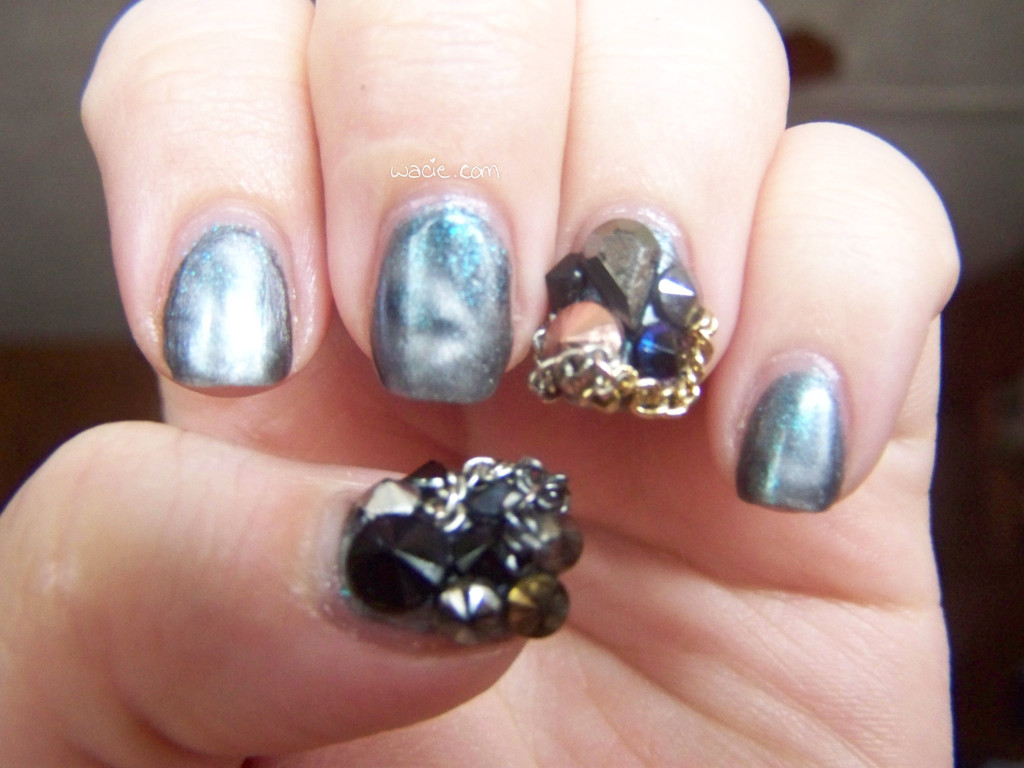 I only used one polish this week: Sinful Colors’ Polar Opposites. I know magnetic polishes are passé and uninteresting now, but I still like the look, even if I couldn’t get mine to come out very well. As was the case with my last magnetic polish, the magnetic design looked fantastic when I pulled the magnet away, but began to fade and distort as it dried. On some nails, the design is completely invisible, whereas some others barely are. It’s too bad; the magnetic effect really brings out the fine blue-to-purple shifting glitter. It’s a shame it’s not more pronounced, it’s really pretty. 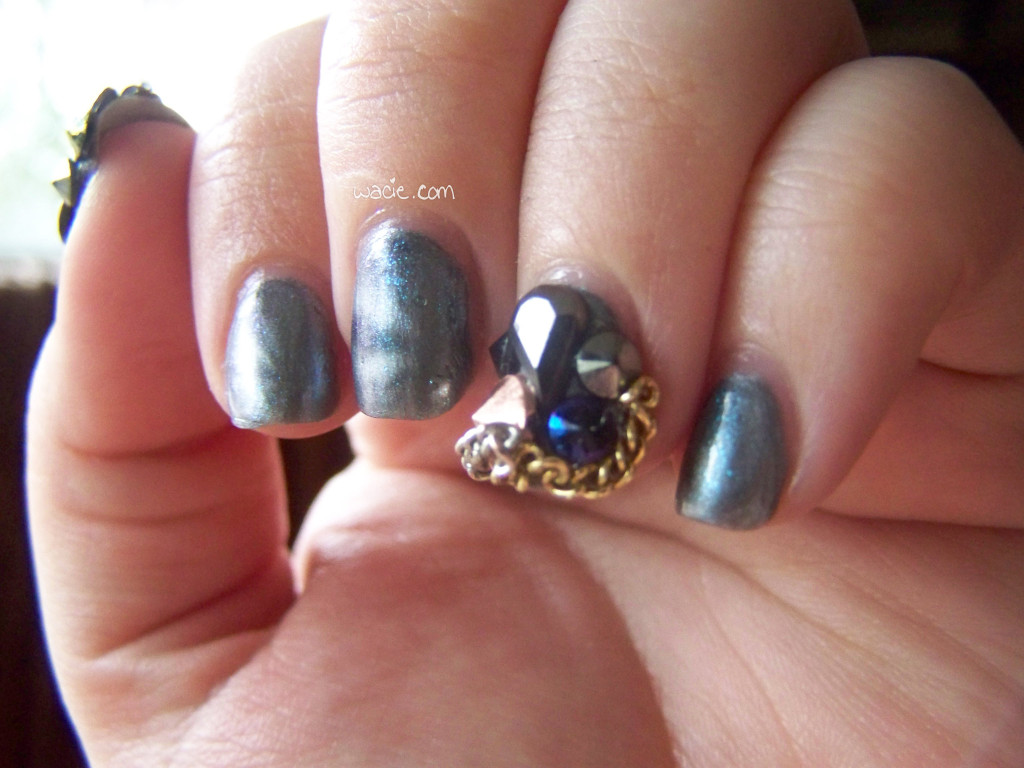 You’re probably wondering what all that crap is doing stuck to my nail. I got this nail art wheel from Claire’s with a bunch of round pyramid studs in it, and I thought that since I was only using one color, I could use a few of these studs. I thought they’d look best paired with a gray or silver polish, and since I was using one, I tried it. These are some of the tackiest, trashiest, most clothes-snagginest nails I’ve ever done. I can’t wait to see what it’s like washing my hair in the morning with these bad guys. There are pyramid studs of various sizes and colors, a teardrop rhinestone, and metal chain segments in a variety of finishes. I know they look like over-the-top hooker nails, but they make me feel kind of badass, like I could cut somebody with them. I might accidentally cut myself. 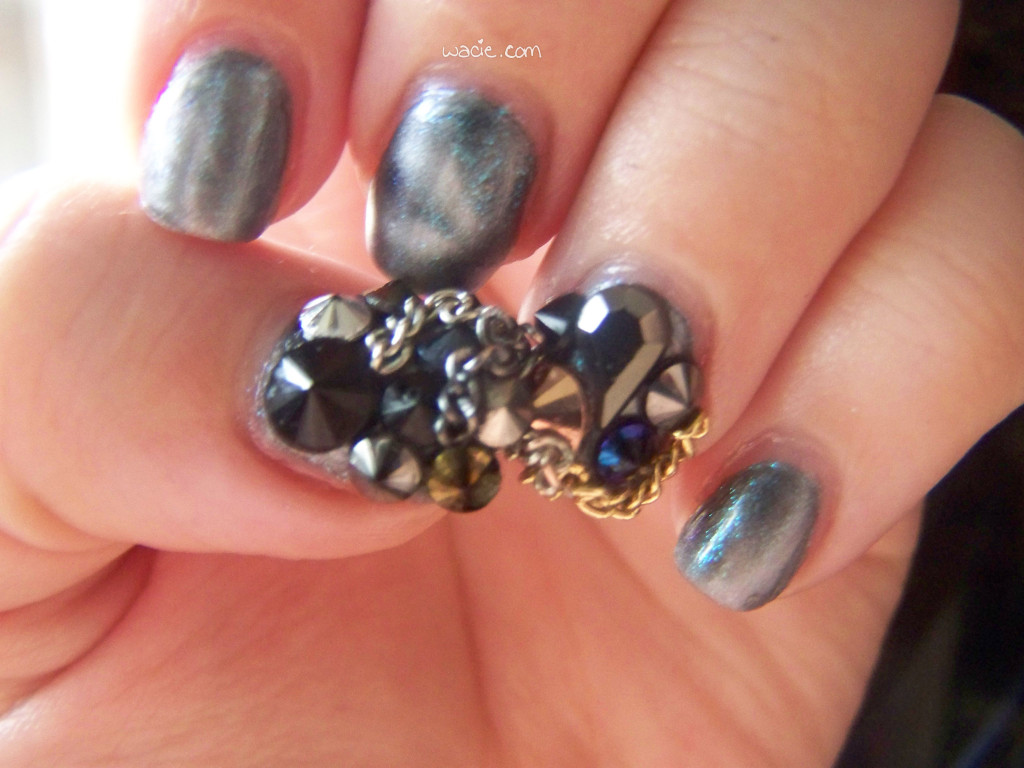 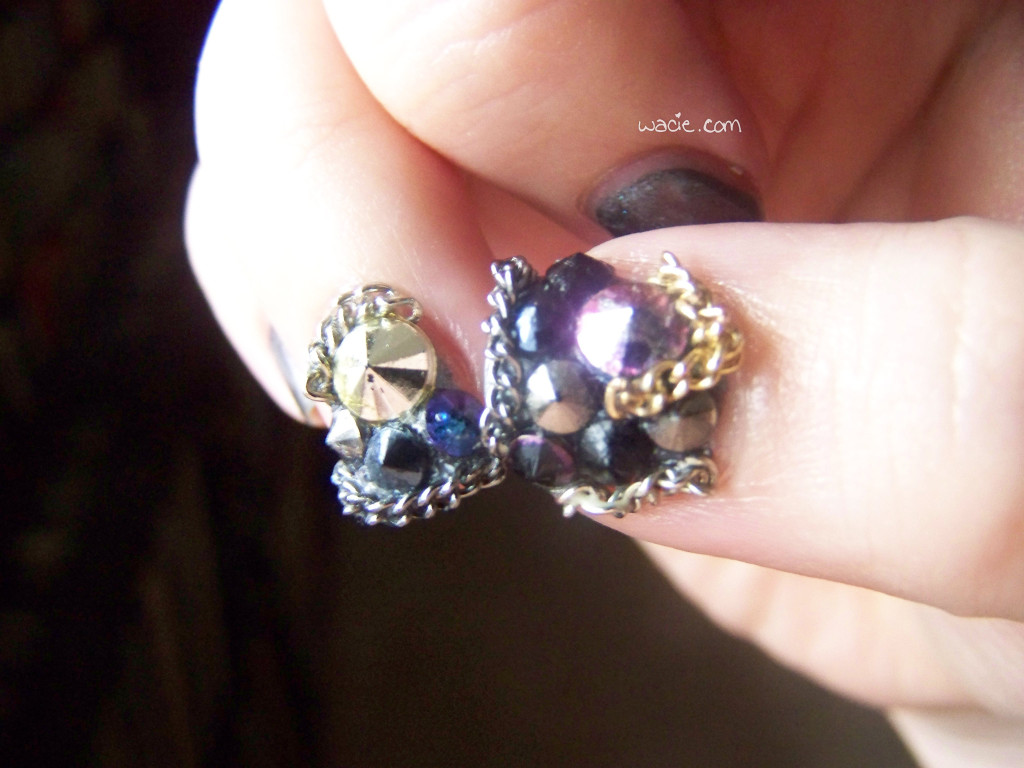 I don’t always post my right hand, but when I do, it’s tacky as hell. 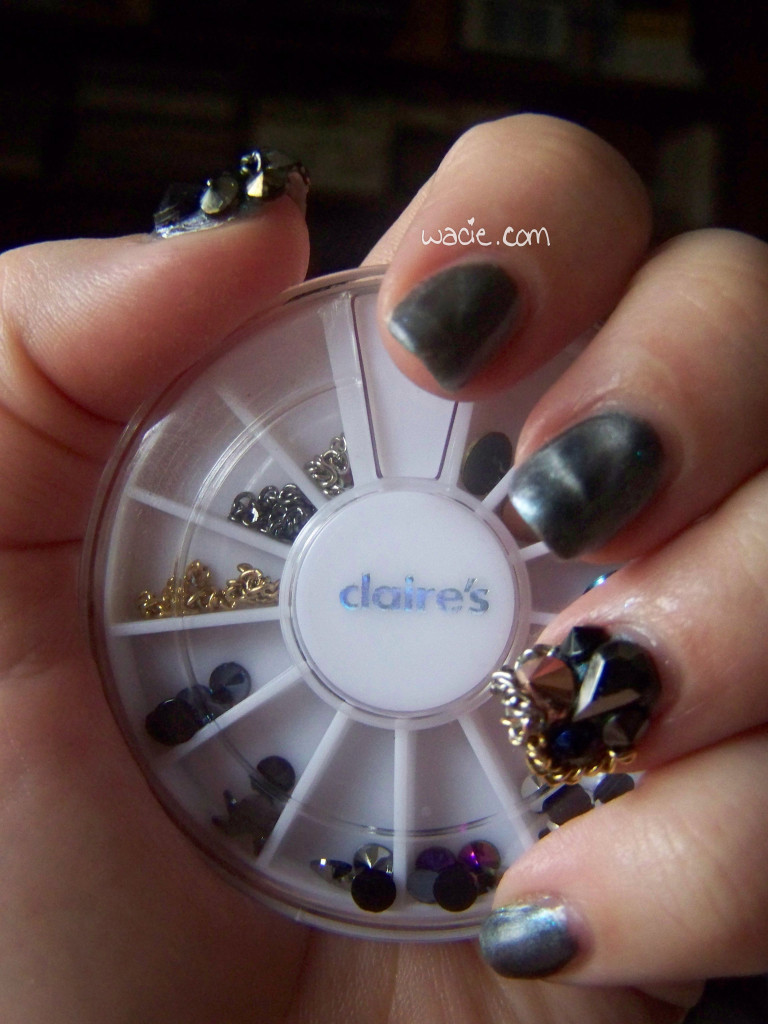 I tried something new this week: the DIY gel manicure. I originally saw a post on Reddit (that I can’t find now, so here’s the tutorial I used), where someone applied layers of Gelous between their color coats to get a durability comparable to a gel manicure. I was in Sally this weekend, I saw the Gelous, and I decided to try it for myself. Application was easy, but took some time; you’re using a few different products in a short amount of time. I didn’t really like this part; I like to let my polish dry for a really long time (like an hour) before I put another down. As a result, when I went to clean up my cuticles, I got some pulling and tugging from where the polish was kind of dry, but not dry enough. I have some weird edges from that. Also, the tutorial skipped base coat altogether and jumped right into the Gelous. I wasn’t okay with that. Having bought my first bottle of Nail Envy this weekend, I started with a base coat of that, then went for my usual OPI base coat (which was probably overkill), and then went into the Gelous tutorial. We’ll see if it holds up. I really hope it does, because now that my boyfriend lives here, I have to wash dishes twice as often, and my manicures don’t hold up the way they used to when I only had to do dishes once a week. 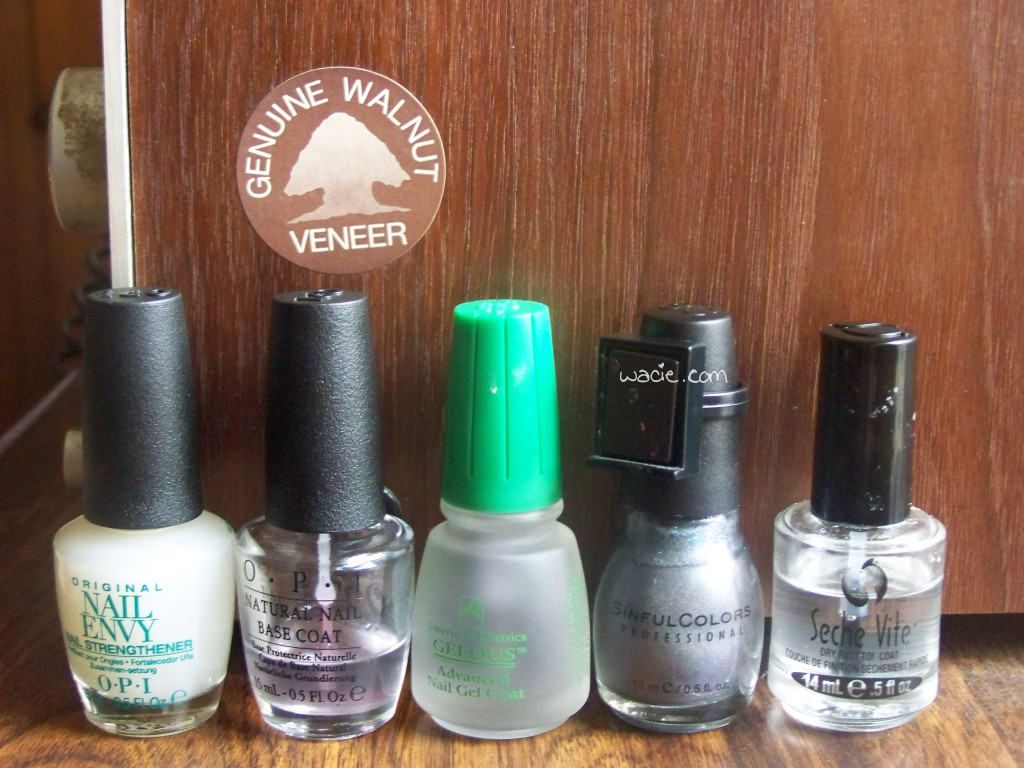 One of these things is not like the others. It’s Sinful Colors’ Polar Opposites!

In unrelated news: Wacie Nail Company is a thing that’s really going to happen, and soon. Last week I ordered some supplies for a R&D run, and the last of it will arrive tomorrow. I will probably spend all my free time this week huffing lacquer fumes and inhaling glitter, and hopefully, I’ll have working prototypes by Friday. I’m really excited about making polish, sharing it with everyone, and doing something more constructive with my time than refreshing Reddit. I hope you’re looking forward to it!