I went a little overboard last week. I finally got the nail art accessories I bought on Amazon; they shipped from China and took ages to get here. I’m thinking about buying more, though. I got like ten rolls of striping tape, tons of rhinestones and pearls, and fimo sticks for about seven dollars, including shipping. This could be either the best thing or the worst thing to happen to my weekly manicure. 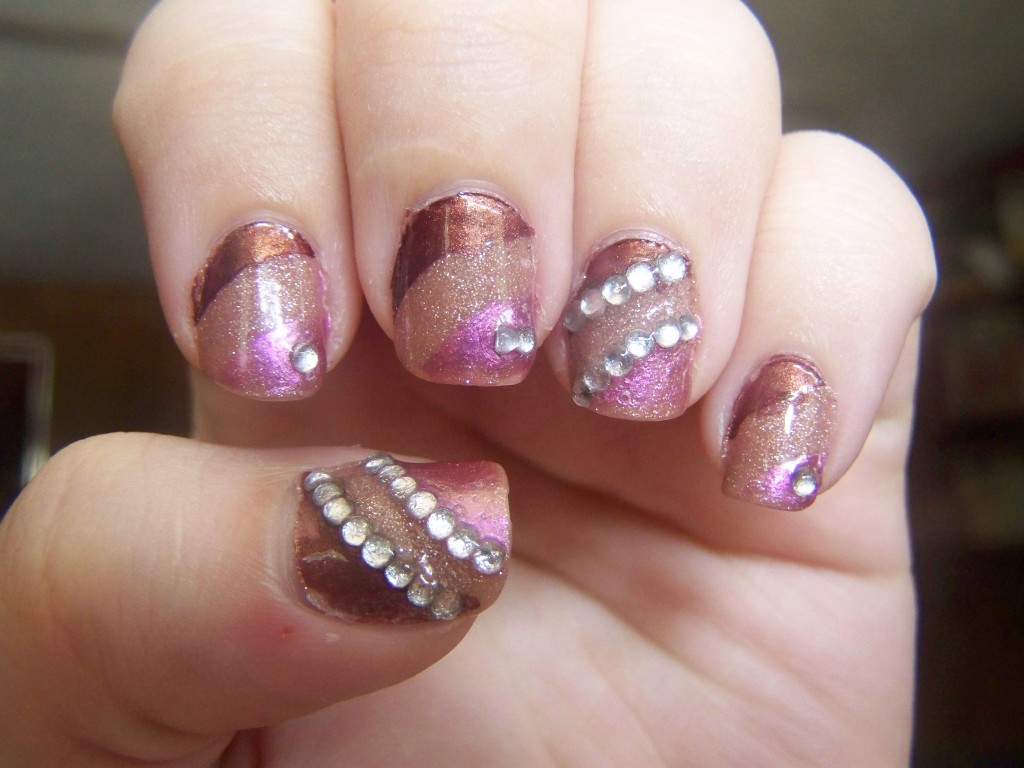 The middle finger’s stone is supposed to be a bow, but whenever I see it, I think about mitosis. I might spend too much time doing science.

When I started with this one, I’d tested it on my white mannequin hand. The white base color had given me a greater contrast between the light colors. It looks fine when light is directly on it, but in a room that’s not so well lit, it’s hard to tell them apart. That’s where the rhinestones came in. That, and I couldn’t not use them. 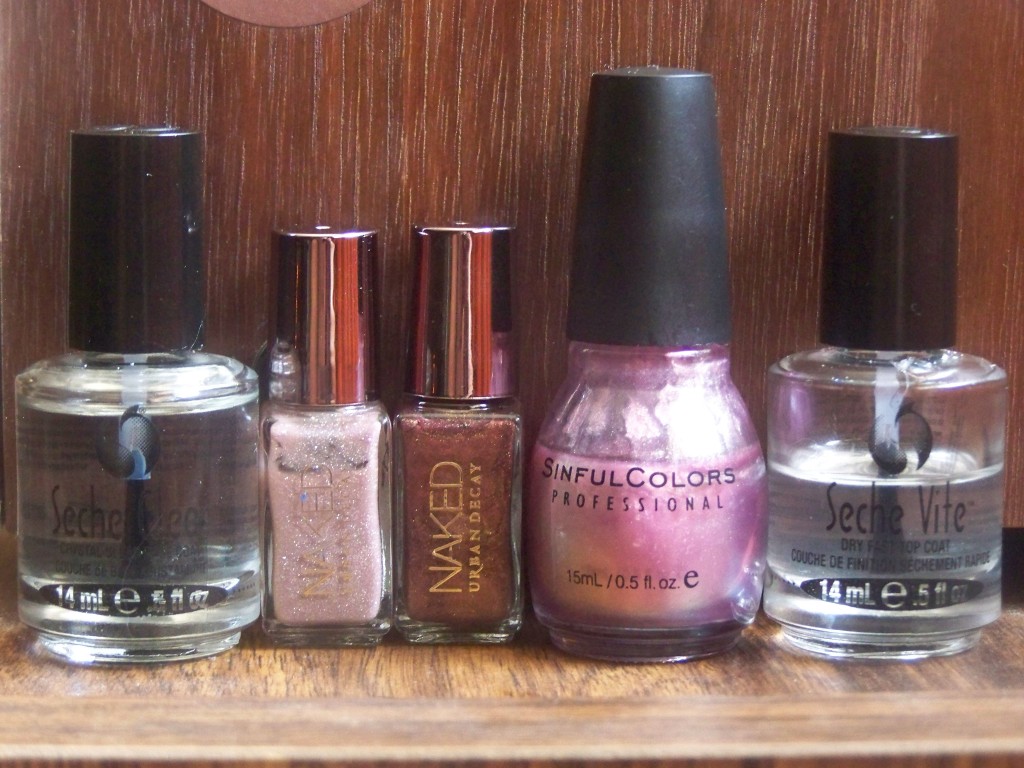 I used Urban Decay’s Naked lacquer set a few months ago, and I still feel a little guilty about having bought it. I’m a huge fan of Urban Decay and their Naked palettes, so adding the lacquer set to my collection was a no-brainer. Of course, when I got it, I was disappointed to find that they were all mini bottles, and that I’d spent almost thirty dollars on mini bottles. I mean, I’m glad I have them, I love all the colors, and a quick search on Sephora.com reveals they’re out of stock, but I’m still a little mad at myself for spending that much. That said, Sidecar is my new favorite neutral. I started with two coats of it before I added all the other nonsense, and part of me wishes I’d just left it on. It’s so understated, but still so shimmery and soft.

Also, that quick search on Sephora.com revealed that Urban Decay has a couple of nail colors that aren’t part of the Naked brand. I think I need them.

This wasn’t the manicure I had planned when I started. I wanted a water marble with this pink and a pastel yellow, Julep’s Blake. I used two coats of it, and got one hand marbled, and then completely ran out of the yellow.  It was about half full from the last water marble I did, and the Julep bottles are so small that I’ll go through half a bottle without realizing it. I’m a little miffed I only got two manicures from that one bottle. So there I was, one hand finished, one not, no other pastel yellow polish to use instead. I tried a neon yellow, and it just turned everything orange. I gave up and started over. I dug around in my bag for hours, looking for something I hadn’t used yet. I saw the Moon Candy in there and said “Hey, why not?”. 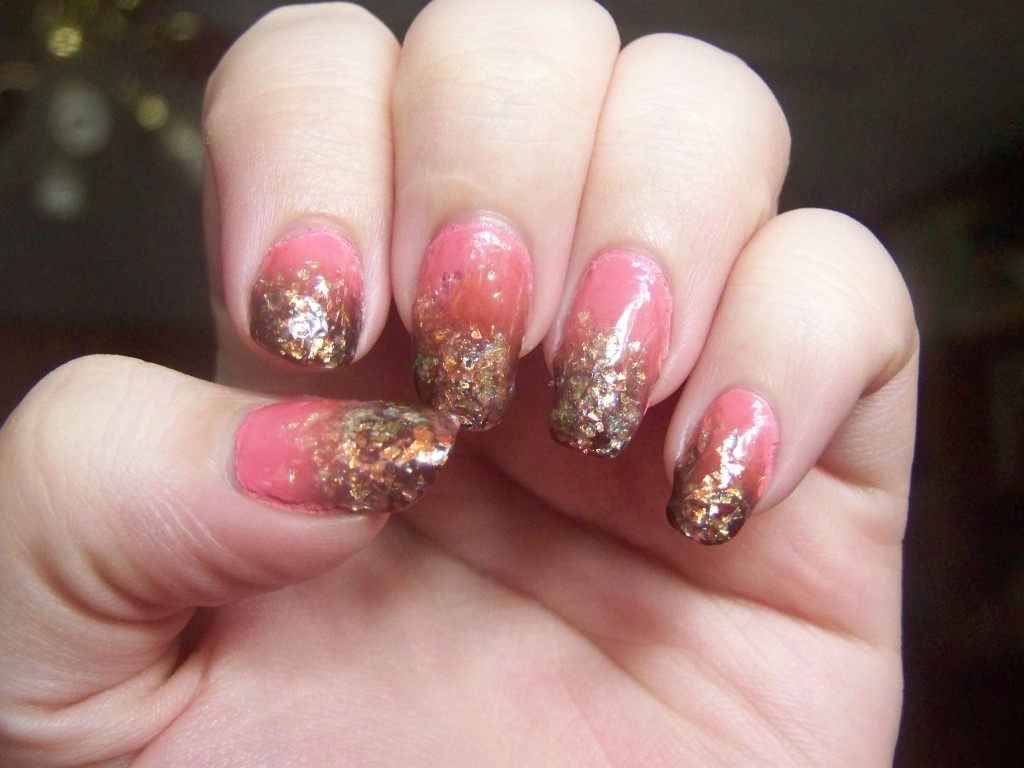 I liked the brown and pink gradient on its own, and at first, I was hesitant to add the flakie glitter. It reminded me of this ridiculous ice cream my boyfriend ate when he lived here that was chocolate and cherry and even had these heart-shaped chocolates with cherry filling. It’s excellent break-up ice cream. Anyway, so I was thinking about that, and I almost used heart glitter instead of the flakies, but I’m glad I didn’t. I like the way it came out. Also, something completely new to me is using both kinds of gradients together. I’d either do a color gradient or a glitter gradient, but never both at the same time. I like the dimension I get from doing both. 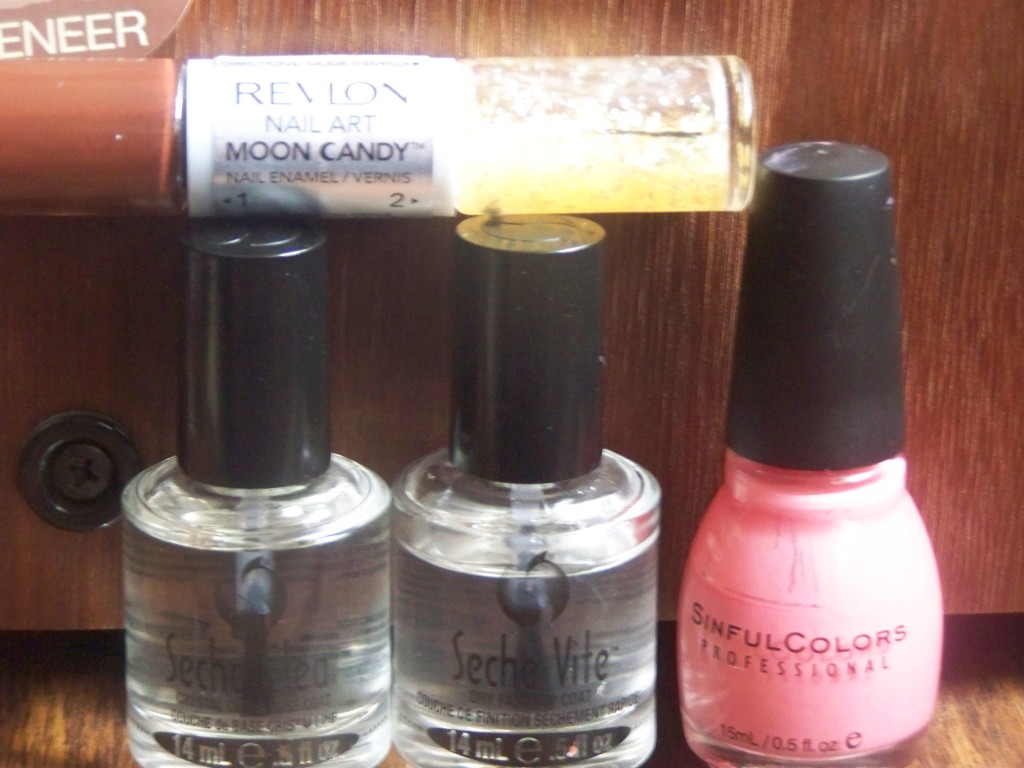 On an unrelated note, this manicure survived mowing the lawn right after being finished. I thought I’d chip at least one, for sure, but nothing happened. I have failed twice at mowing my own lawn, first because the mower ran out of gas and I didn’t realize it, and the second time because it started breathing smoke. At least my manicure is intact. 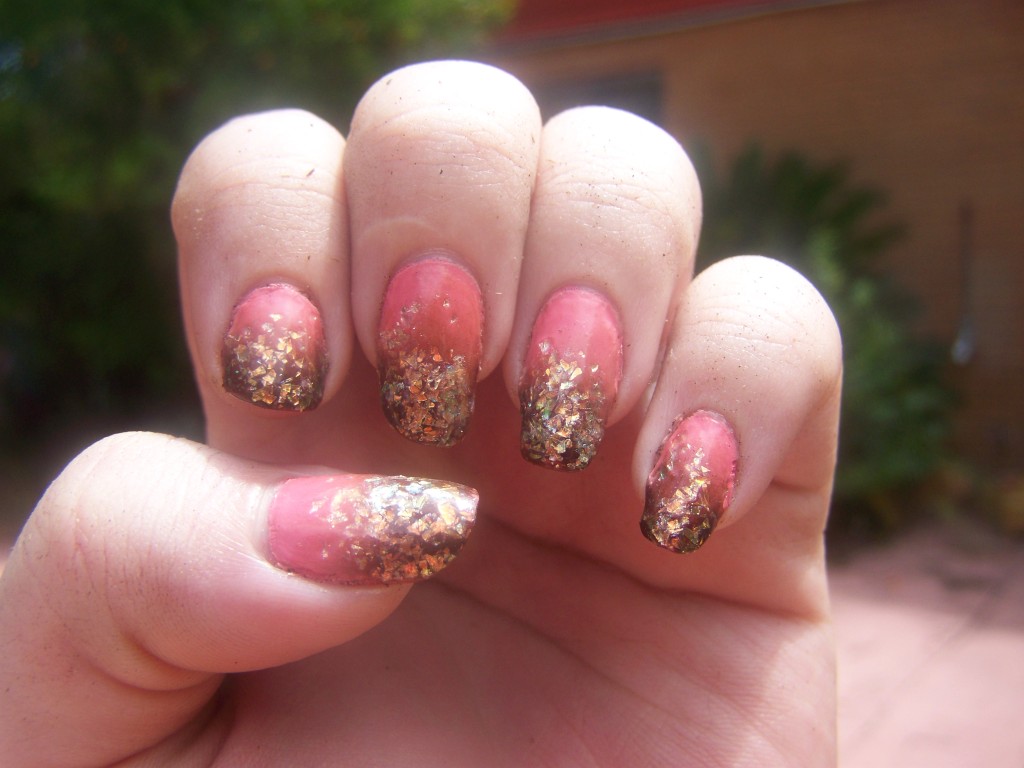 So here’s another bandwagon I missed by a year or so: the gold leaf top coat. Yes, that’s real 18k gold on my nails. It was part of my splurge binge the other month, when I scooped up all the polish and things I’d wanted for months but was too broke to buy. I was so happy to finally use it this week! The green color I used this week is actually from Germany. I got it in a Reddit makeup and nail polish gift swap last summer. She sent me a bunch of eyeshadow and a four bottles of German nail polish. I’ve had this stuff for a year, and I’ve just gotten around to using it. 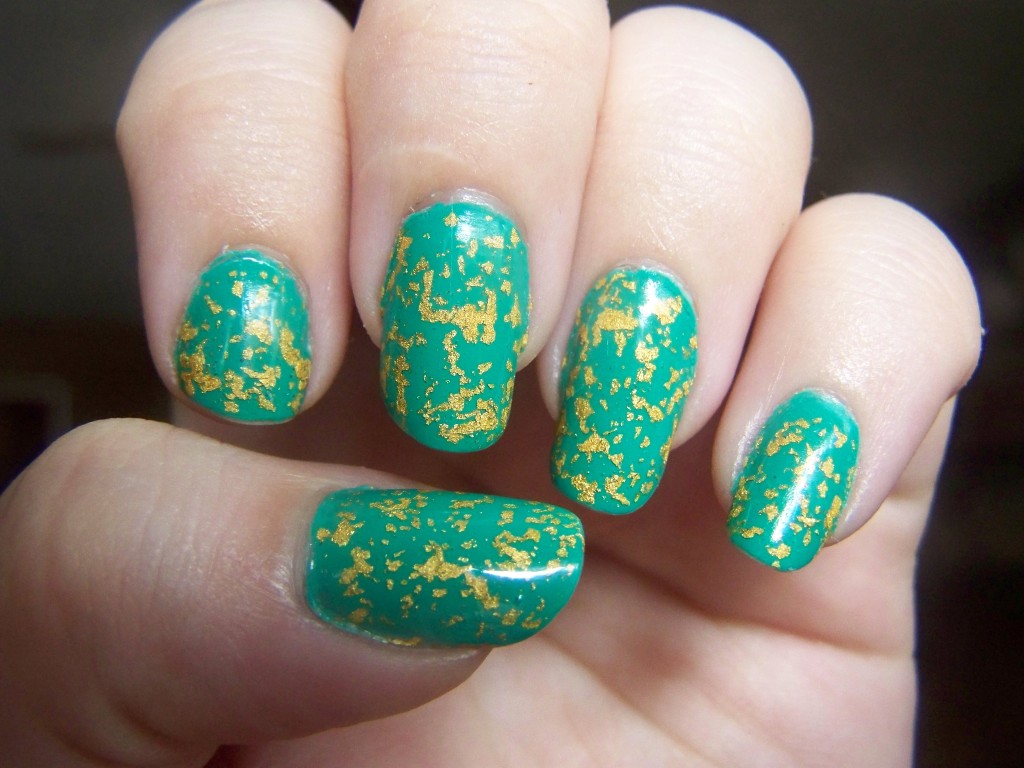 Overall, I like this look. I feel kind of bad; this is one of the most expensive nail products I own, and even though P2 is impossible to find in the US, it probably costs like €2 in Germany. I love it though. I love all kinds of products from around the world, and this is no exception. It’s worth it to me to pair it with the gold leaf. 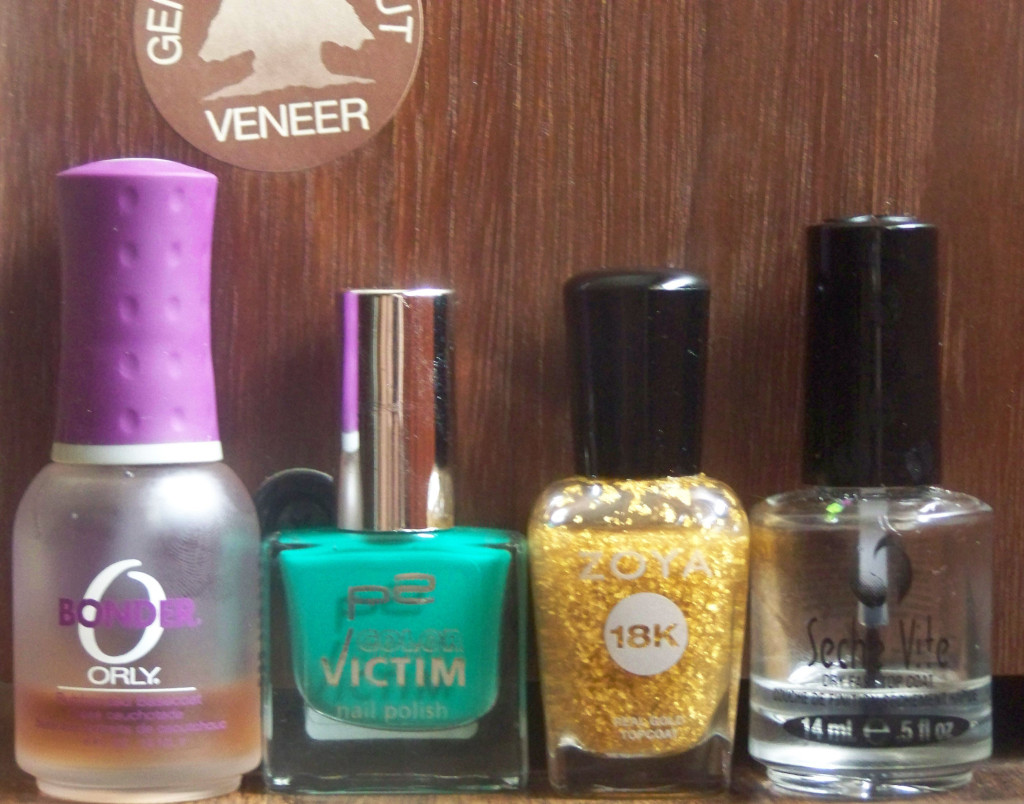 The best comment I’ve gotten on these so far? “I see a retarded brachiosaurus on your middle finger.” 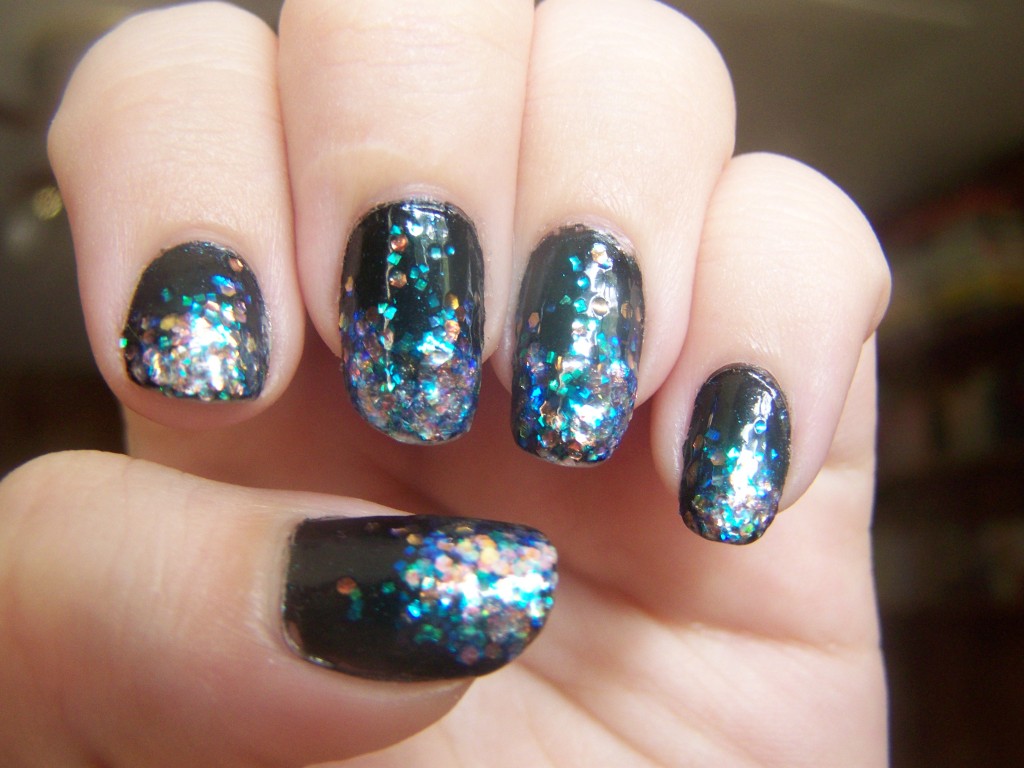 I don’t know if it’s been obvious, but I’ve been using a lot of warm colors in my manicures. It’s summer; I’m wearing a lot of warm neutral makeup shades to achieve a natural sun-kissed look, and wanted to get the same effect on my nails. I chose the glitter, Revlon’s Heavenly, because in the bottle, it’s warm and iridescent. When paired with the black, I got a completely different look, and I couldn’t be happier with it. The colors in the glitter are much more visible, as well as the different shapes and sizes. I almost feel as if I’ve judged this glitter polish unfairly. 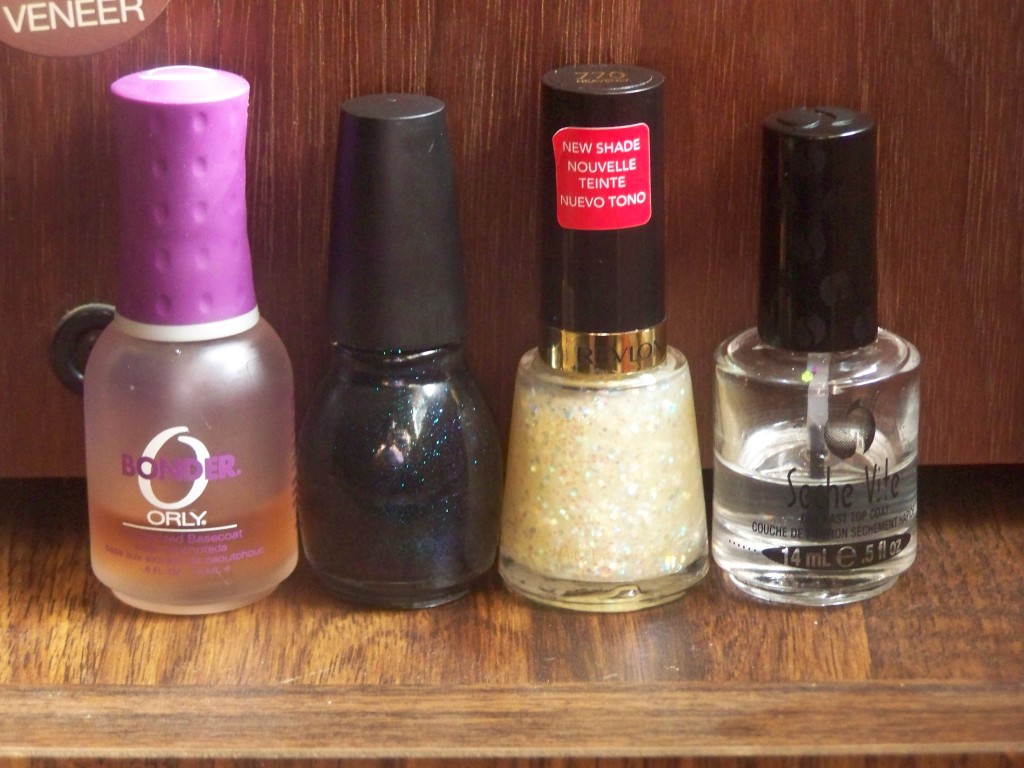 Here’s a picture of a cat my friend drew on my dusty record player. I should clean my stuff. 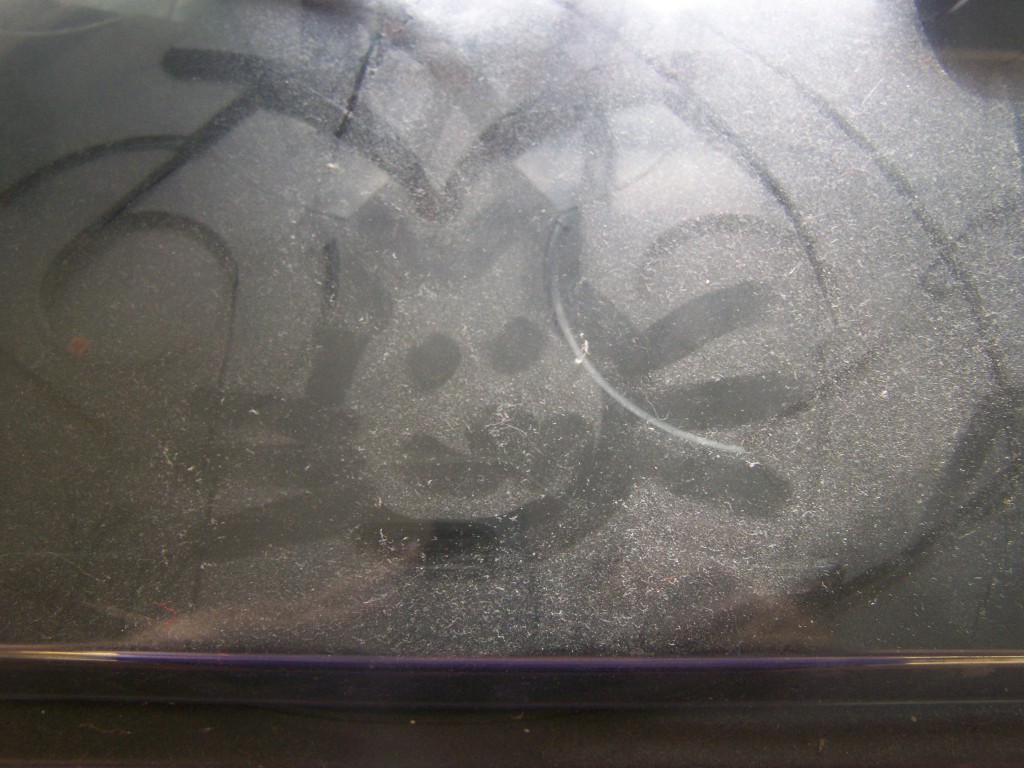 So I’m back from my work trip, and it’s time for another manicure. 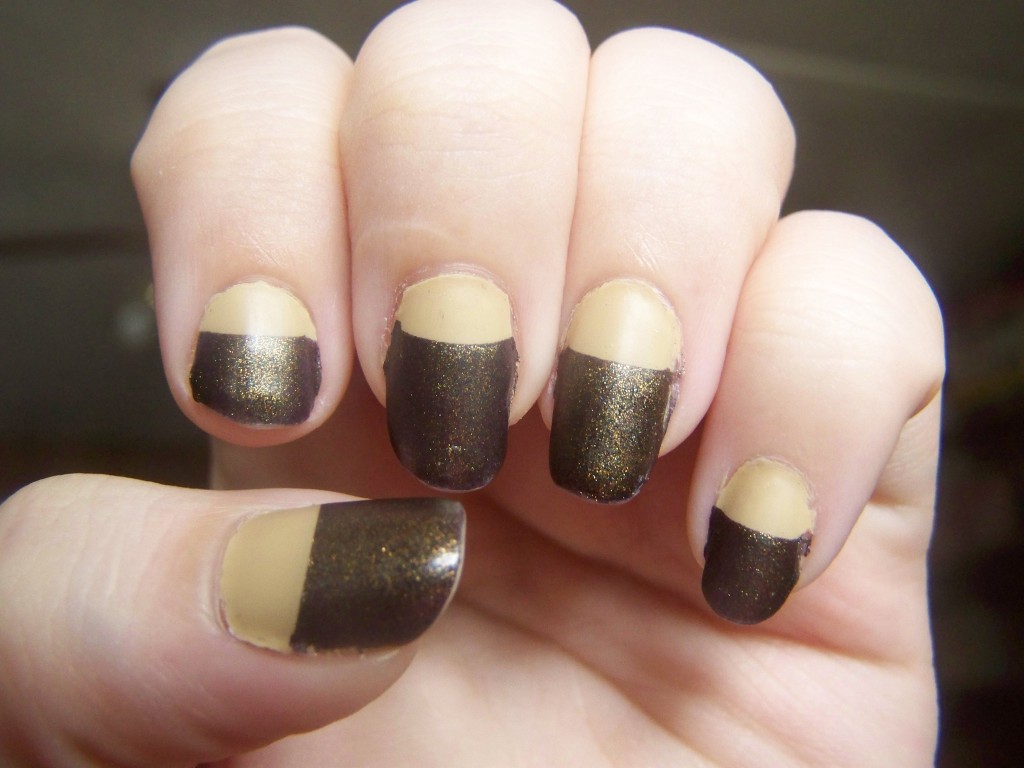 My long, beautiful nails made it through the conference, but broke one after the other when I got home. My index fingernail tore off while I was washing my hair Saturday morning. I broke a thumbnail turning the crank to shut a window. I broke the other thumbnail cleaning for a surprise houseguest. I gave up and preventively cut all the rest. I miss them. I miss how they made my fingers look long and slender. However, my hands are much more functional now. 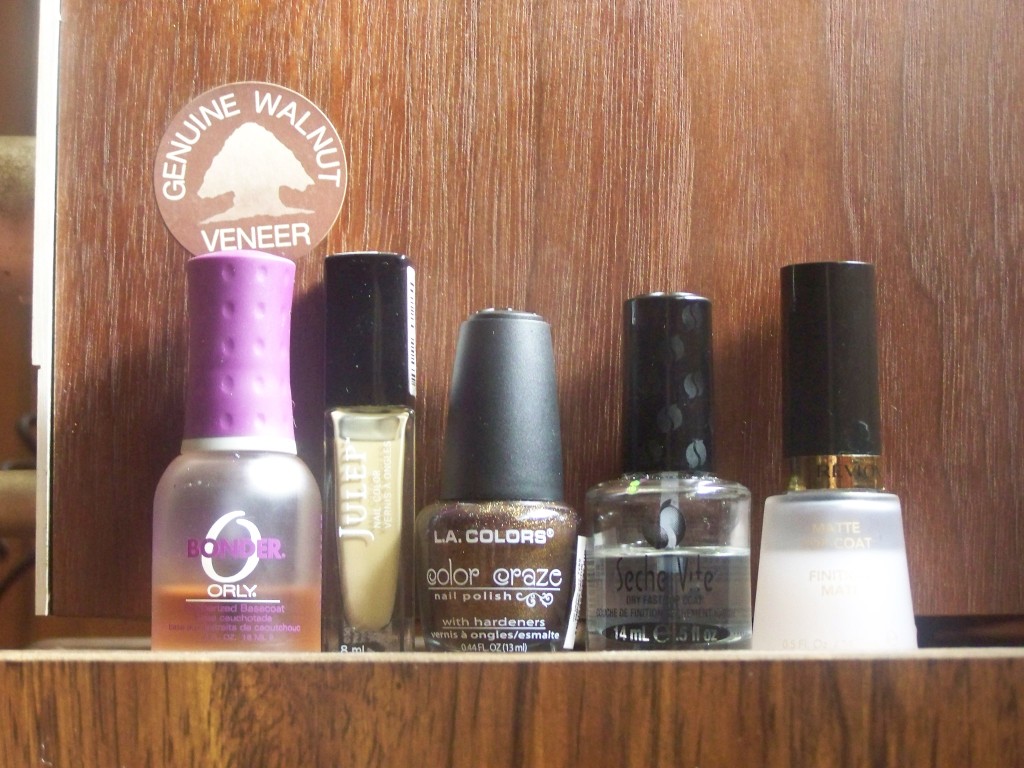 I’m not sure if I wrote about this yet, and I’m kind of ashamed to admit it, but I’ve bought almost a hundred bottles of polish in the last month or two. The nude (maybe it’s a khaki) was one of the newest ones; I was totally out of control and bought the whole Julep set because I couldn’t choose just one Maven box. It reminds me of unblended foundation. The burnished gold came from my initial dollar store haul when I was first living on my own.

For whatever reason, I have some major tip wear, and I only did them yesterday. I blame the matte top coat.