My Manicure Monday today is kind of an experiment. The polish I have on is one I love, Revlon’s Sparkle Aplenty. I needed an accent piece, so I tried caviar nails for the first time. I’m wearing three coats of Sparkle Aplenty with one coat of Ciate’s Speed Coat Pro, and my caviar mix is Ciate’s Midnight in Manhattan. 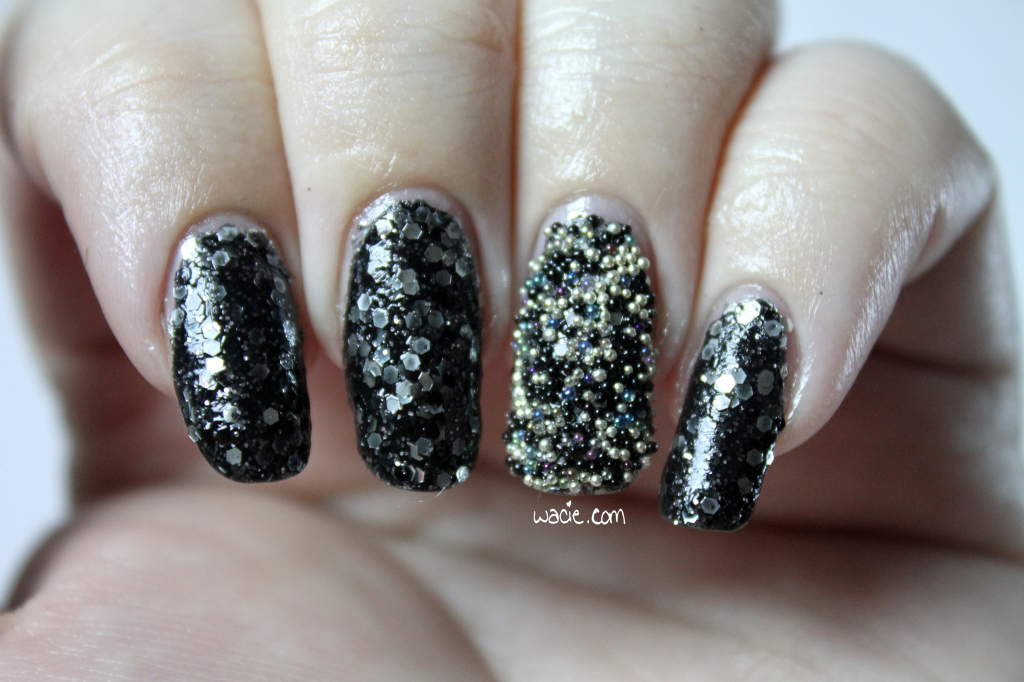 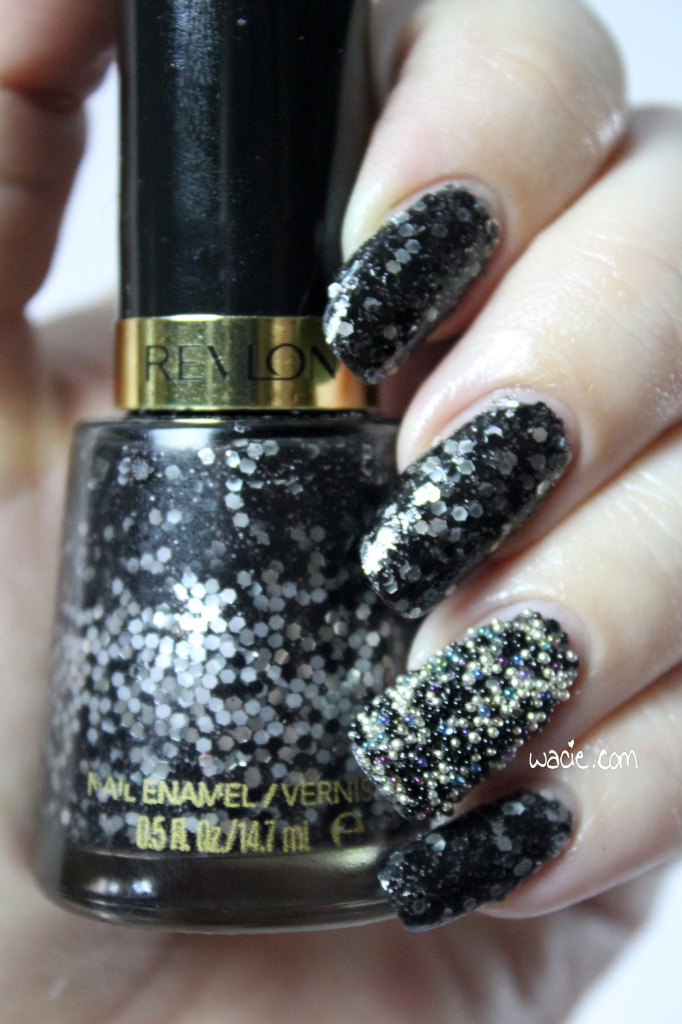 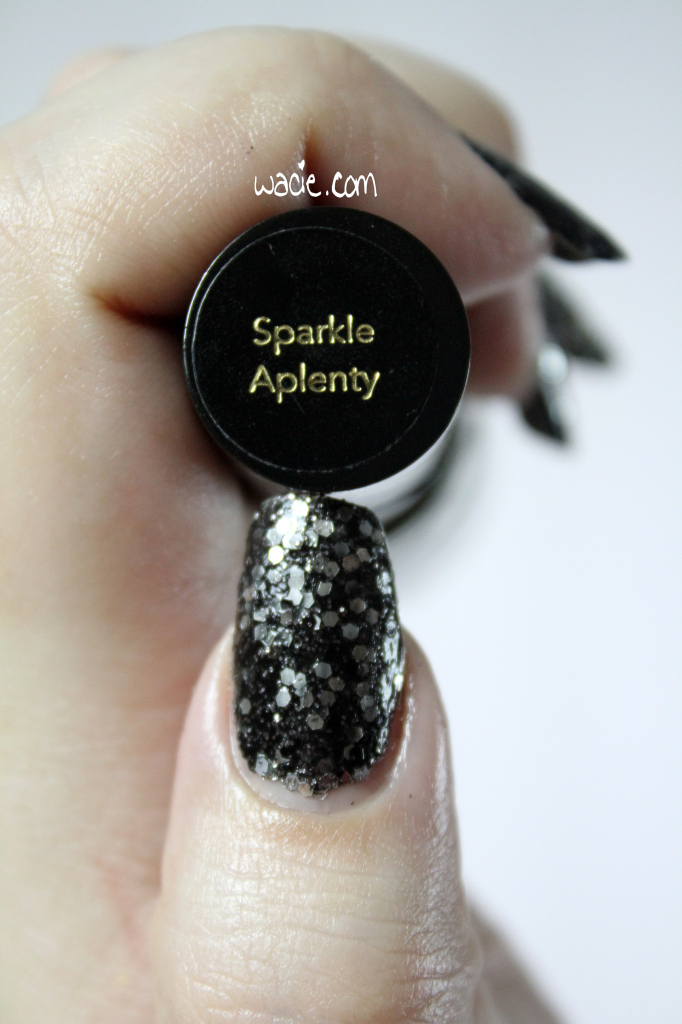 Sparkle Aplenty is a black crelly with lots of metallic silver glitters in various sizes. It went on pretty easily; the first coat was thin and streaky, but the second one evened it out nicely. Full opacity was reached at two coats. The glitters spread well and evenly. This polish dries quickly and with a satin/semi-glossy finish. Because glitter is the bulk of the polish, there’s lots of glitter texture after drying; a top coat would definitely be necessary with this. 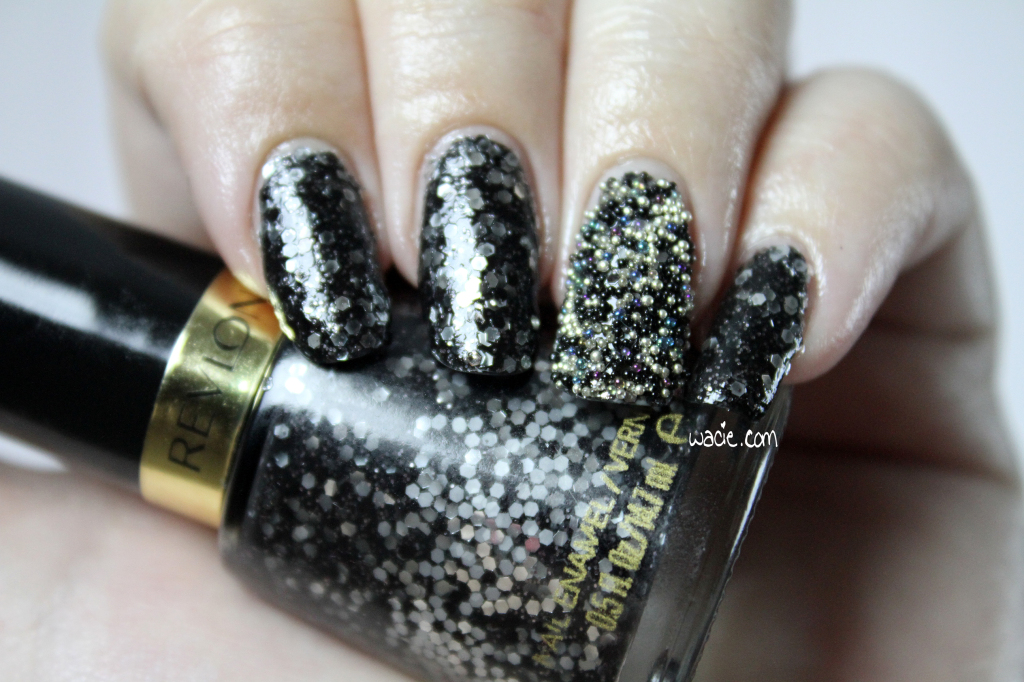 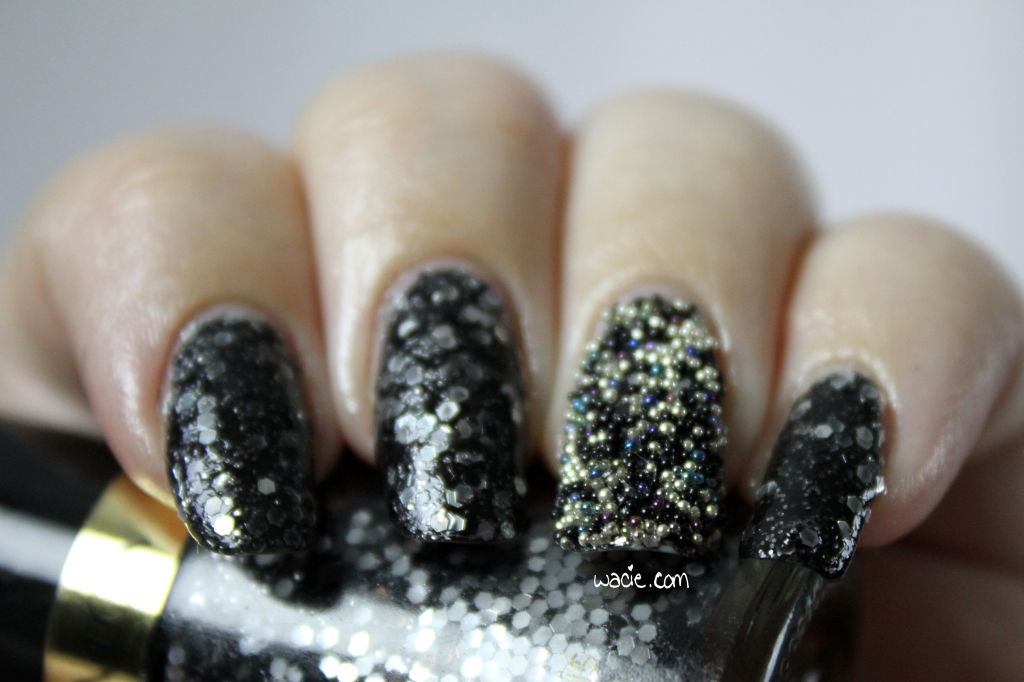 I thought the Midnight in Manhattan would be the perfect caviar mix, because they contain the same colors. The caviar beads are actually a bit more colorful; in my office, it just looks like silver and black beads. In the studio, I find out that they’re gold, as well as some greens, blues, and purples that I failed to notice before. Also, for some strange reason, the corners of my caviar nail appear to flare out instead of curling under, like the rest of my nails do. It looks weird when all my nails appear slender and tapered, and then one looks like a duck foot. It bothers me. It’s wrong. 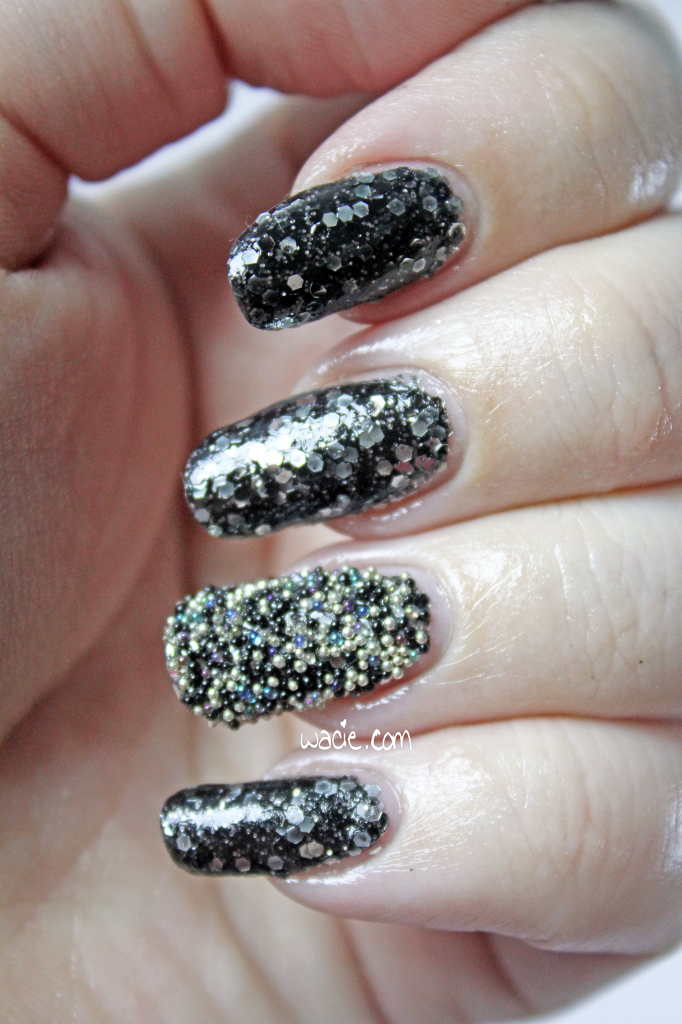 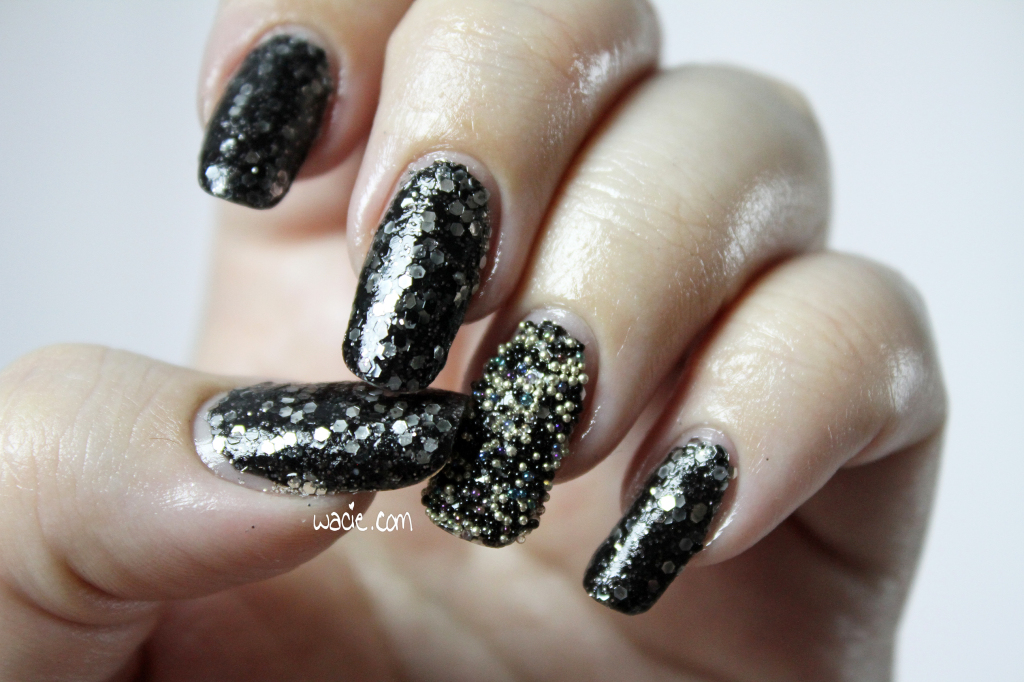 I do admit I liked this mani a lot better before I added the caviar. I should have just used studs again. I don’t hate caviar nails (yet), but I have a ton of bead jars (thanks, Ciate advent calendars), and I wanted to use one, just to see what the two-year-old fuss was about. Perhaps I’ll like them more in the future. Today, I don’t. Today, I just see fail.

A few months ago, I had a polish on the blog called Slop Bucket. It was the weirdly-wearable result of mixing several failed Wacie Nail Co. prototypes into one bottle. Shortly after I did that manicure, I took another batch of old prototypes and mixed them up to create Son of Slop Bucket. I’m wearing three coats with one coat of Color Club’s clear coat. 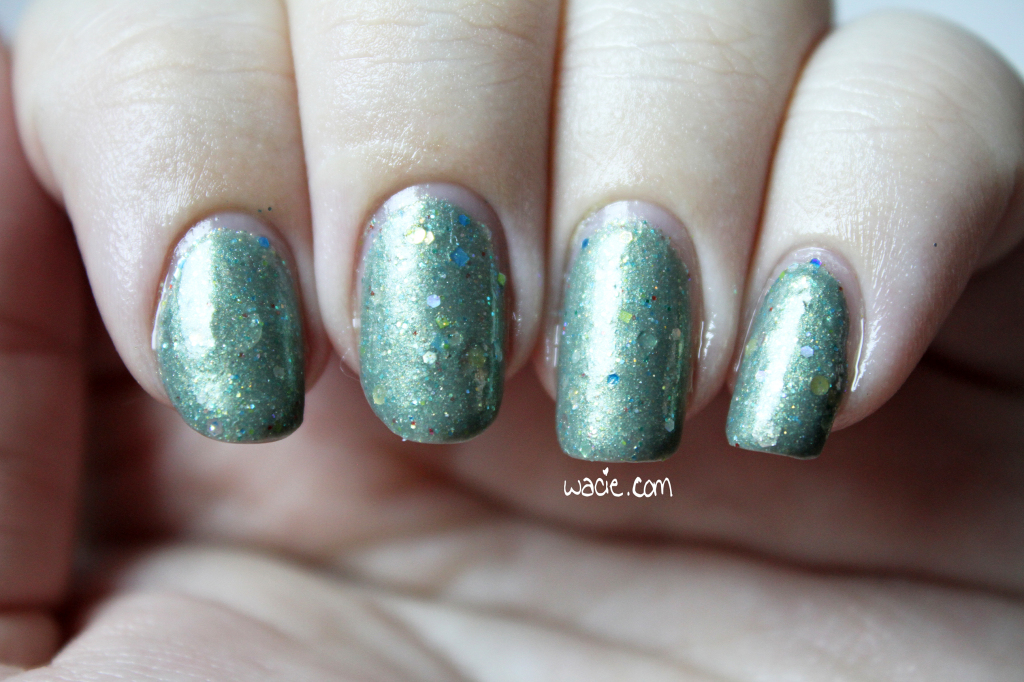 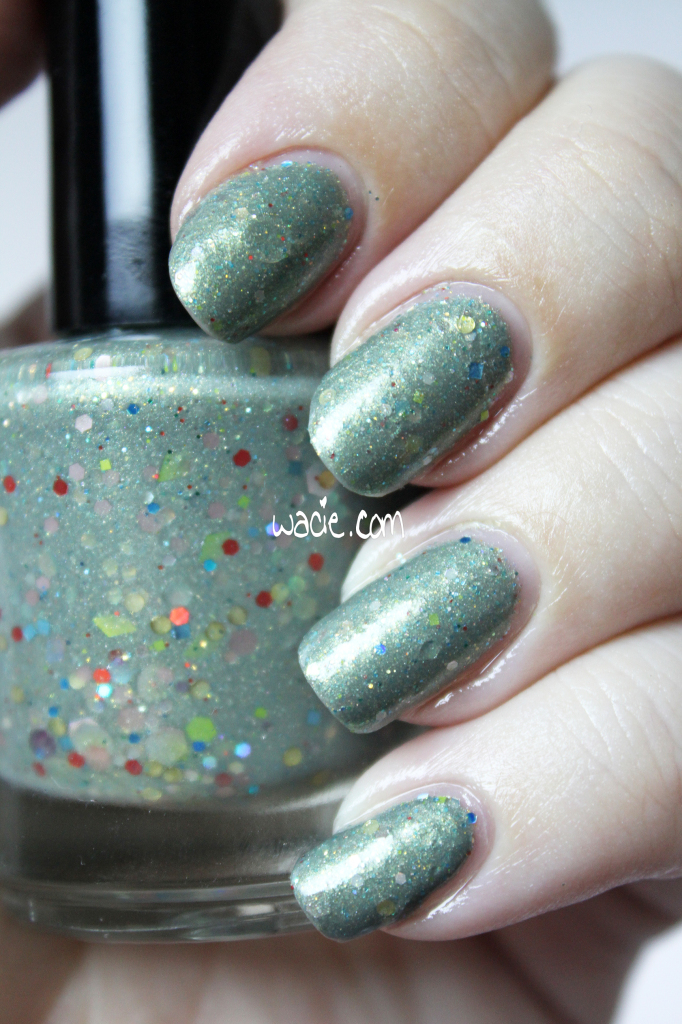 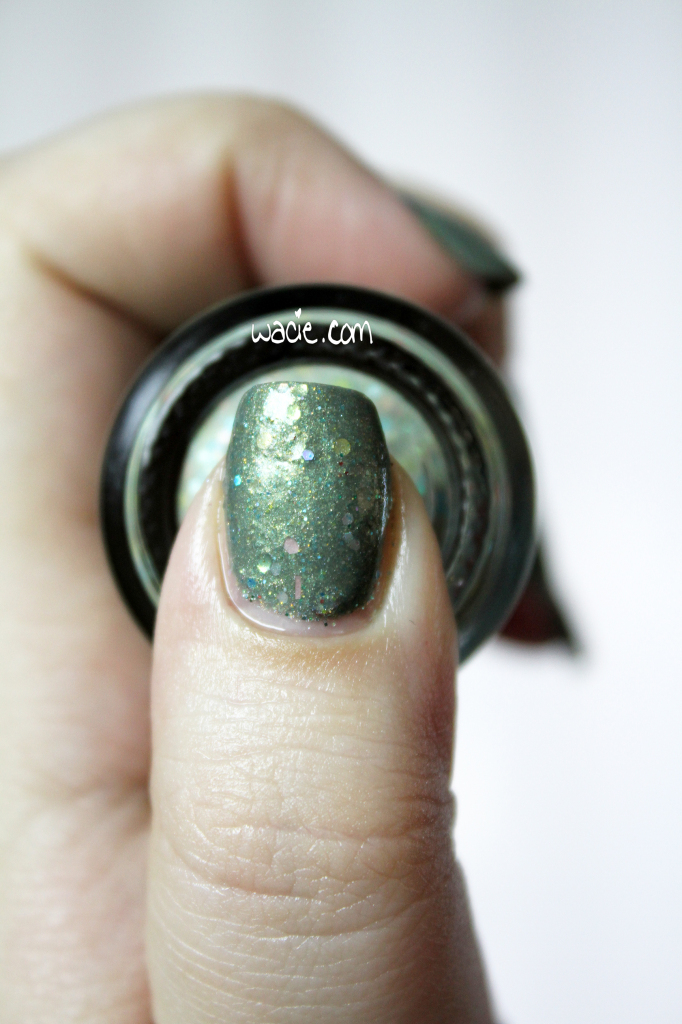 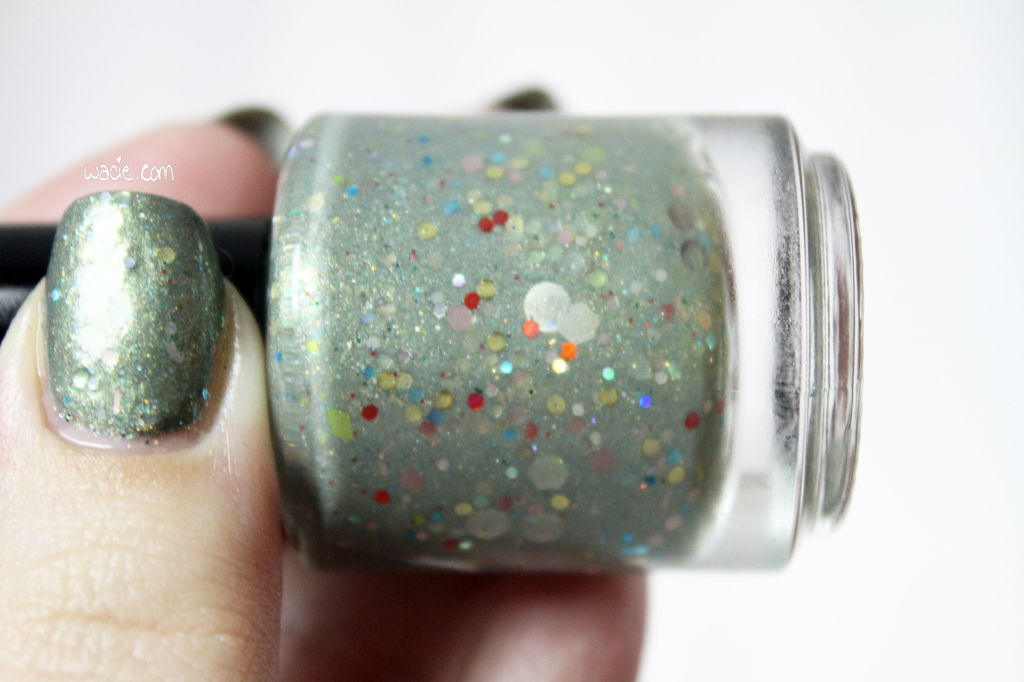 Son of Slop Bucket is a frosty mossy green with a hodgepodge of glitter. It would be difficult to list every glitter in here, because it’s basically every glitter I’ve ever used, along with every pigment, shimmer, dye, etc. I’ve ever used. Because there’s so much stuff in it, it was nearly opaque in one coat. Because it’s so opaque, the glitters just get buried under the next coat of polish. This is especially obvious with the larger glitters; check the index finger. There’s a large dot that got covered and just looks like a sheet pulled over a dinner plate. 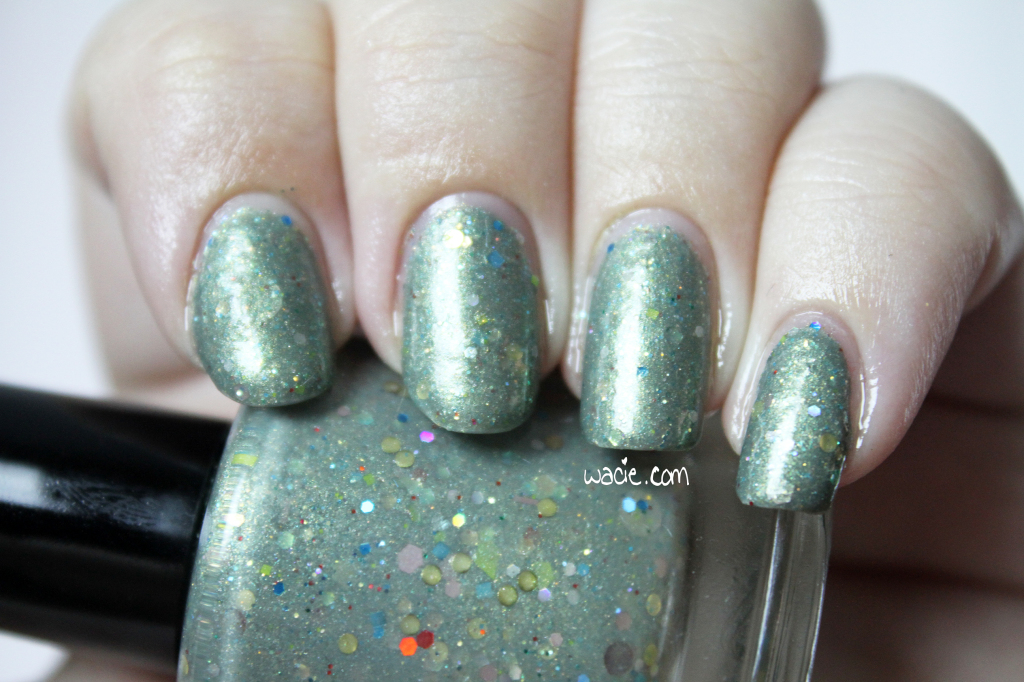 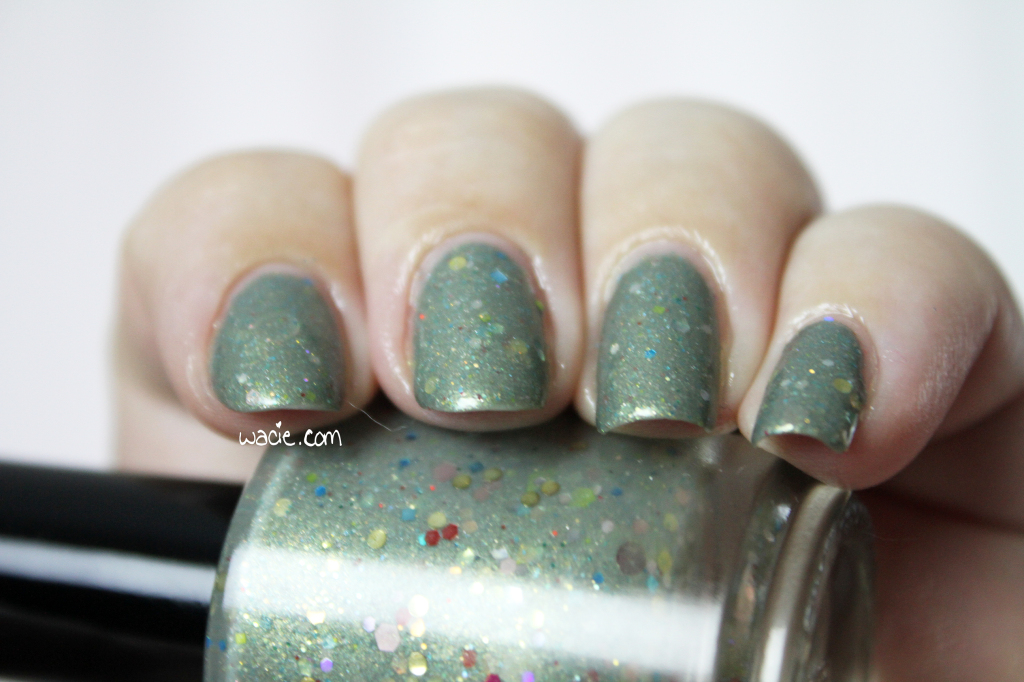 I didn’t expect this one to turn green. I was hoping for black, since a lot of black prototype polishes got mixed in. I’m really pleased with the color; it’s muted, but still quite noticeable. Same with the glitters; they don’t stand out a whole lot, but just enough. There’s a ton of shimmer in it, and it’s the most prominent component. It really pulls everything together. 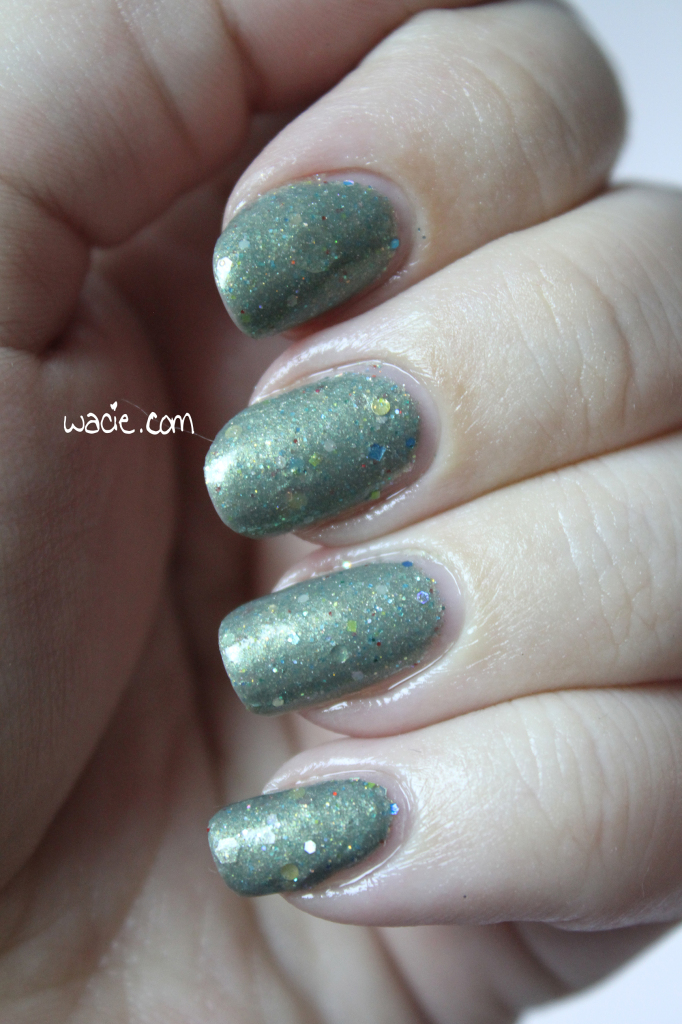 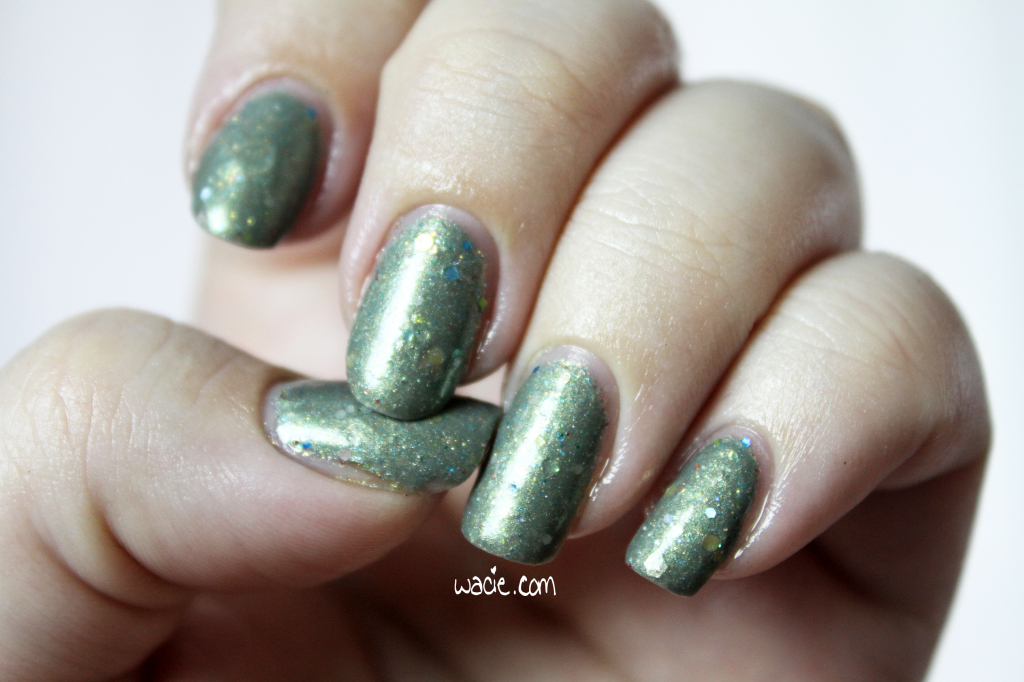 I’m not sure I’ll even bother to keep this. It was a fun experiment, but I can’t really see myself wearing this — or the original Slop Bucket — ever again. I do want to mix them both together and see what happens, though. It can’t get much worse.

While Wacie Wednesday is usually reserved for promoting new Wacie Nail Company products, I’ve decided to share a nail fail this week instead. Deli-Style is a product I promise to never unleash on the public. Except for right now. 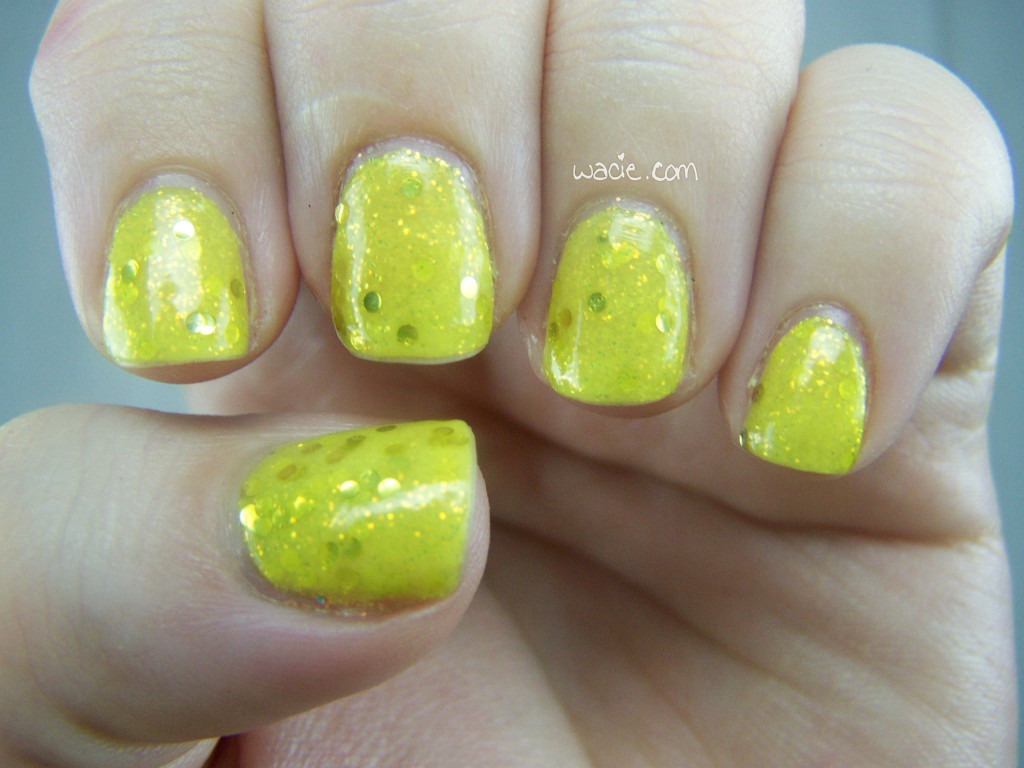 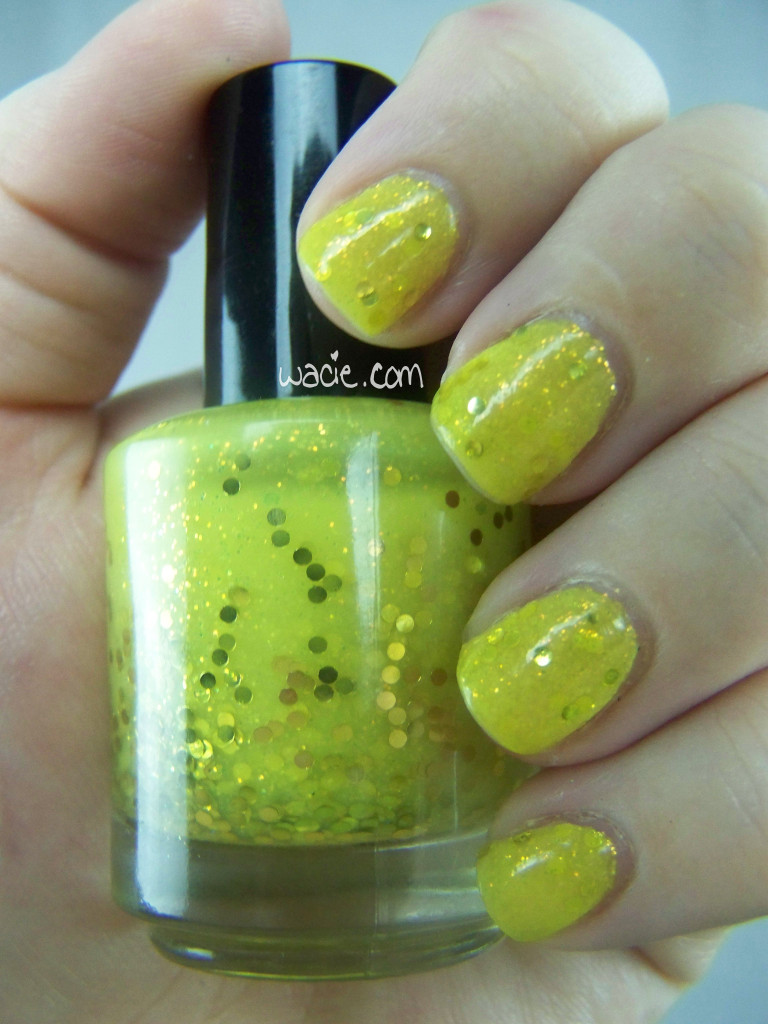 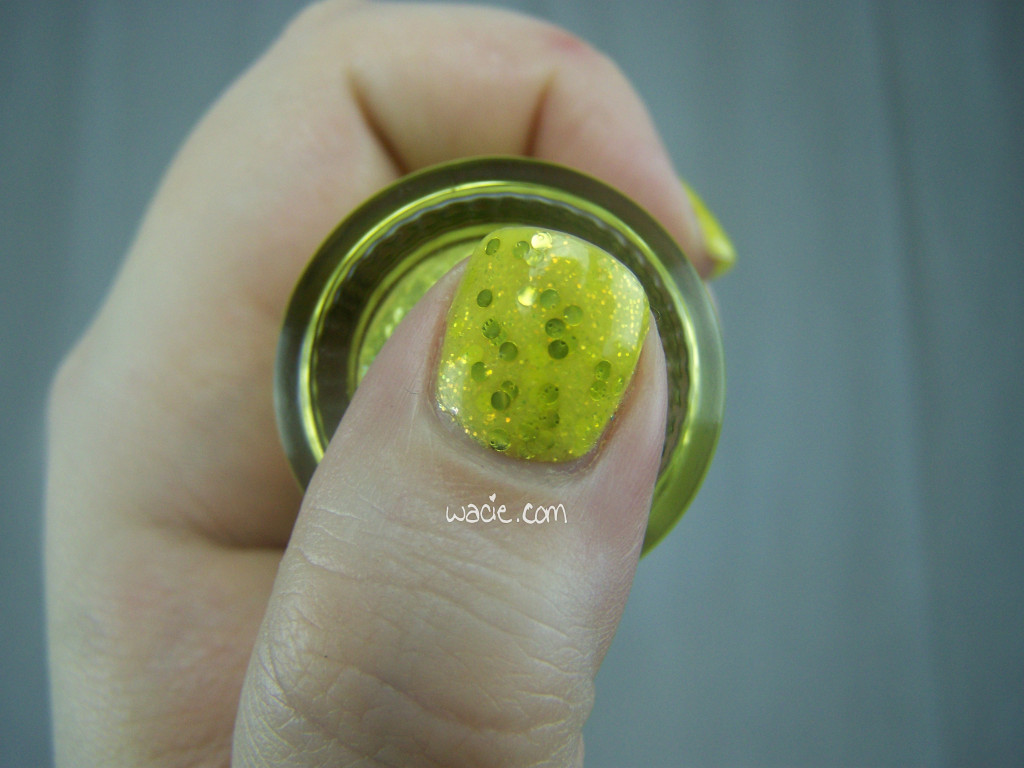 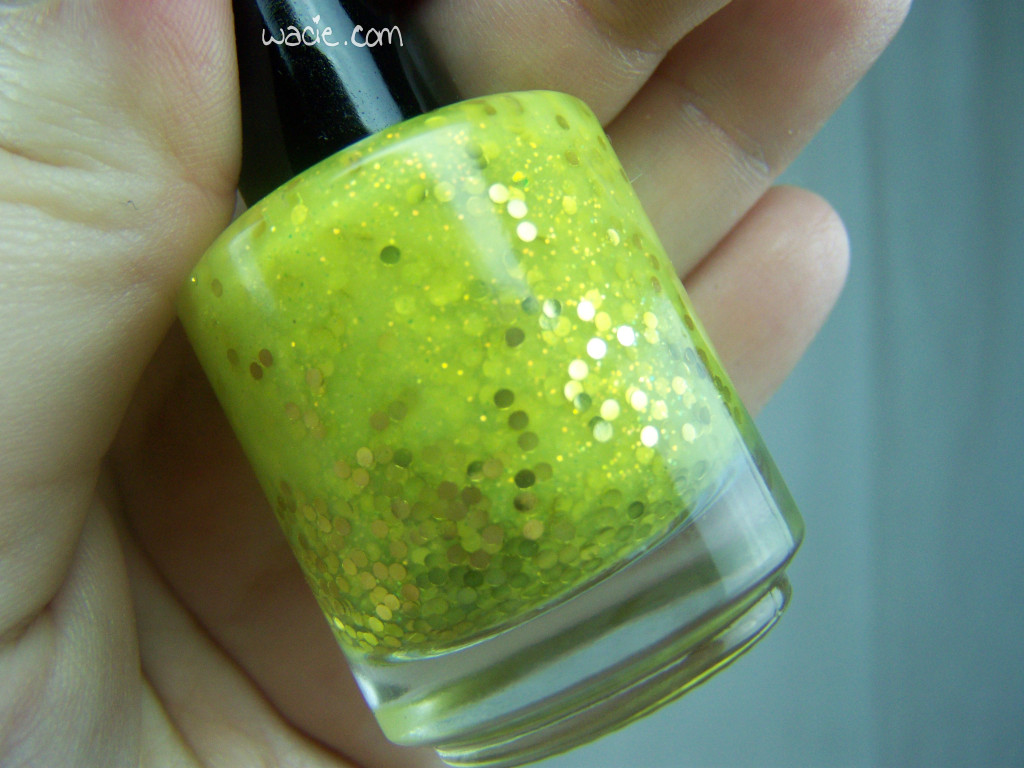 Deli-Style is a yellow jelly with fine iridescent glitter and metallic gold dots. It’s the failed result of an attempt at a beer-inspired polish. I was trying to make something that captured the fizzy, wheaty appearance of hefeweizen. Instead I got something that looks like it was meant to be squirted onto a sandwich. 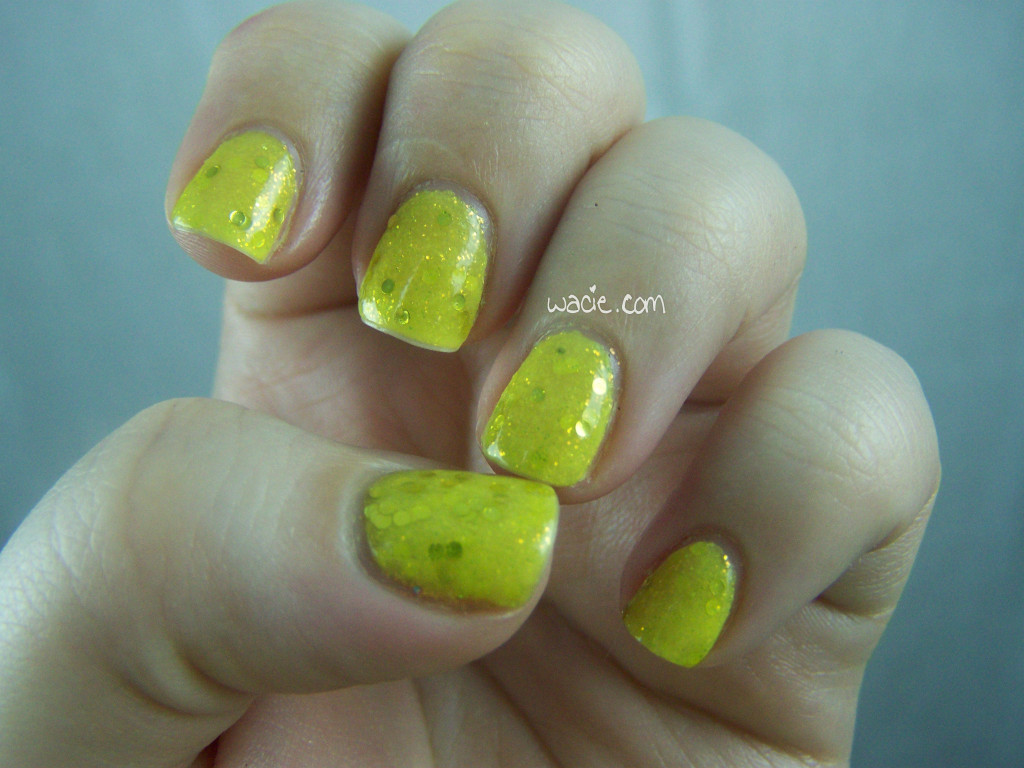 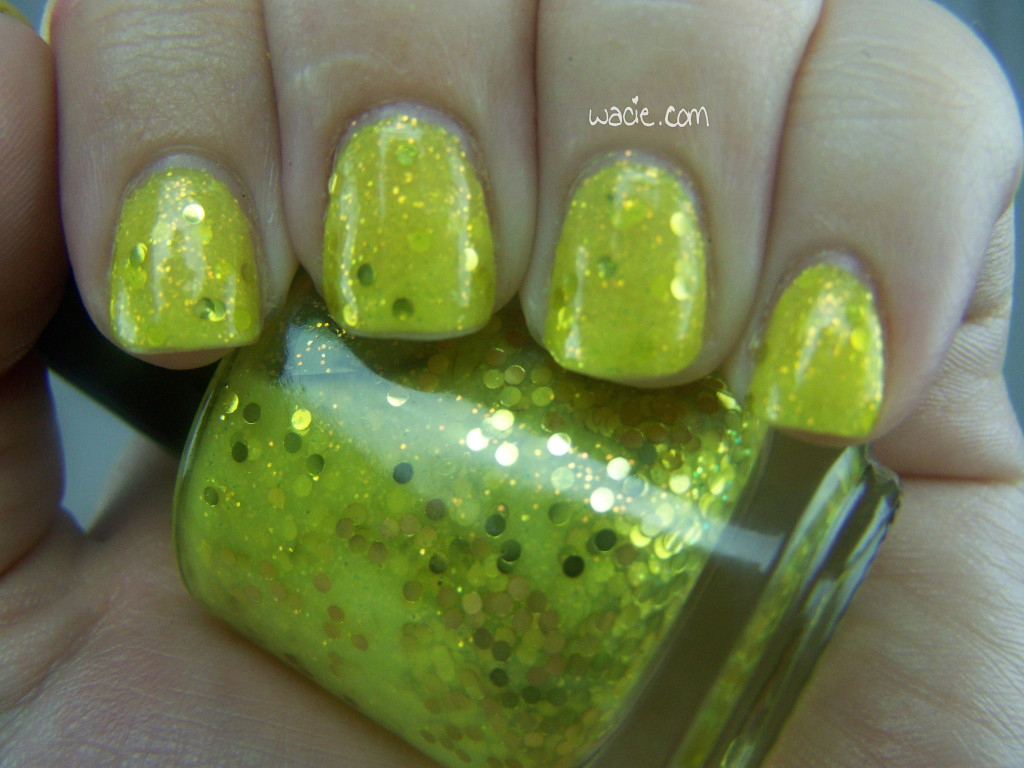 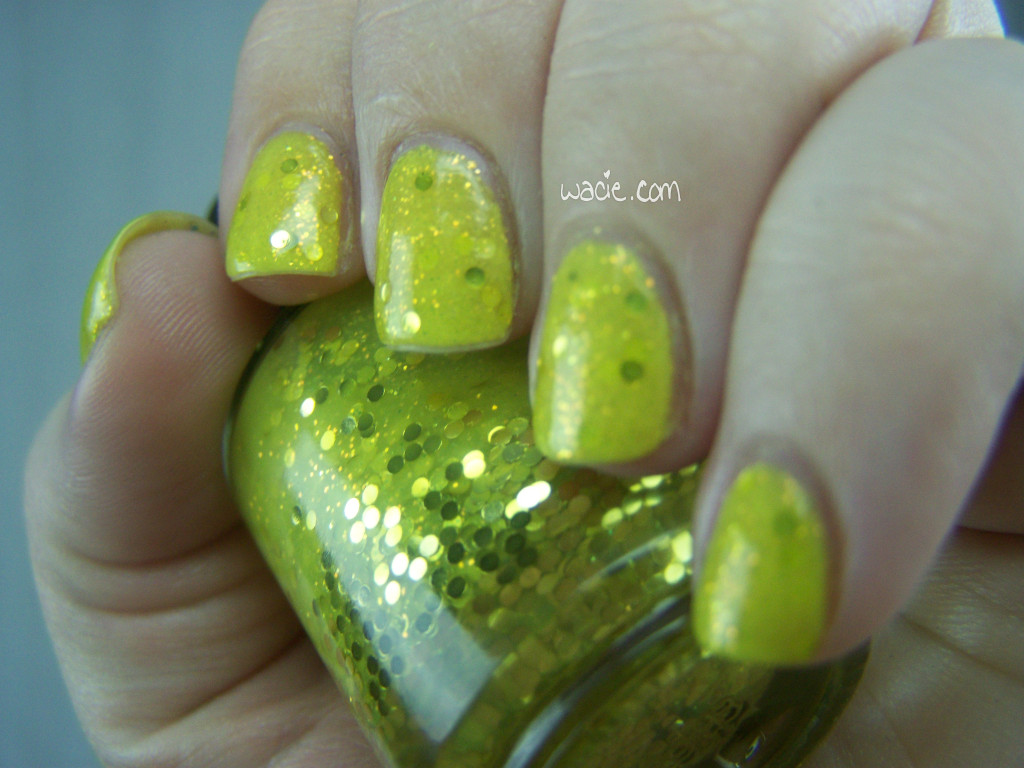 It’s actually not that bad in some lighting. In my office, it looks a bit more like a lemon yellow than a mustard relish. I was actually thinking of renaming it until I went into the studio and saw them under the softbox. It’s still as gross as ever. If there’s anyone who would actually want this polish for themselves, I’d happily make it for you, but I’d also be concerned.