I got some Halloween costume catalogs in the mail this week, so it’s officially not too early to post this manicure. We’re still looking at long overdue swatches from Blue-Eyed Girl Lacquer‘s Halloween 2013 collection. This polish is called Sell Souls for ISOs (OBO); I’m wearing one generous coat of it over China Glaze’s Pelican Gray and Essie’s Fashion Playground. 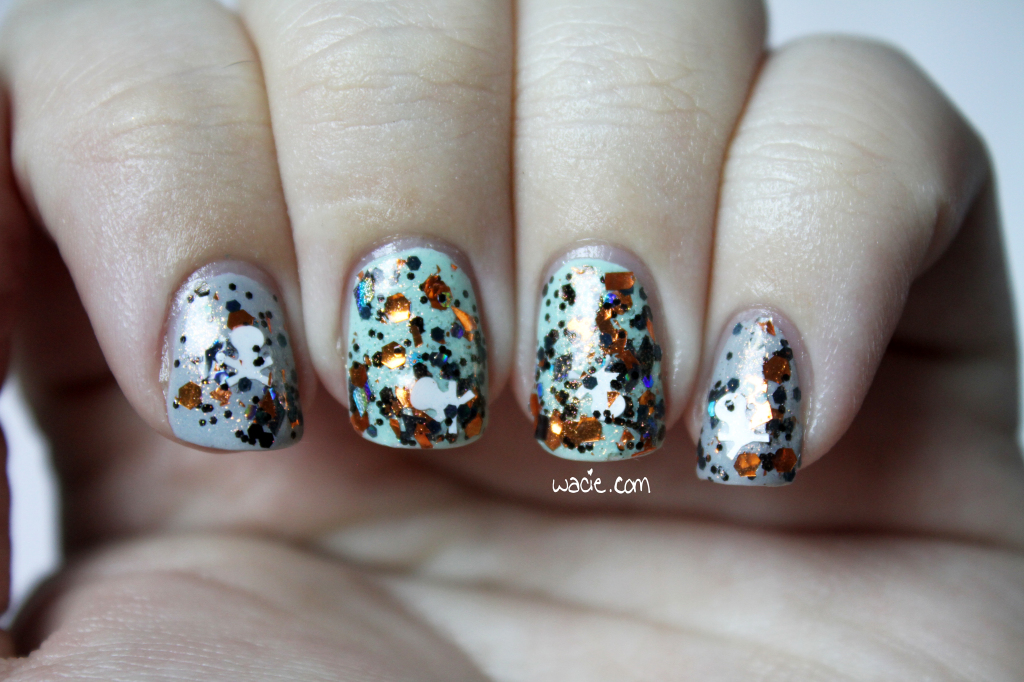 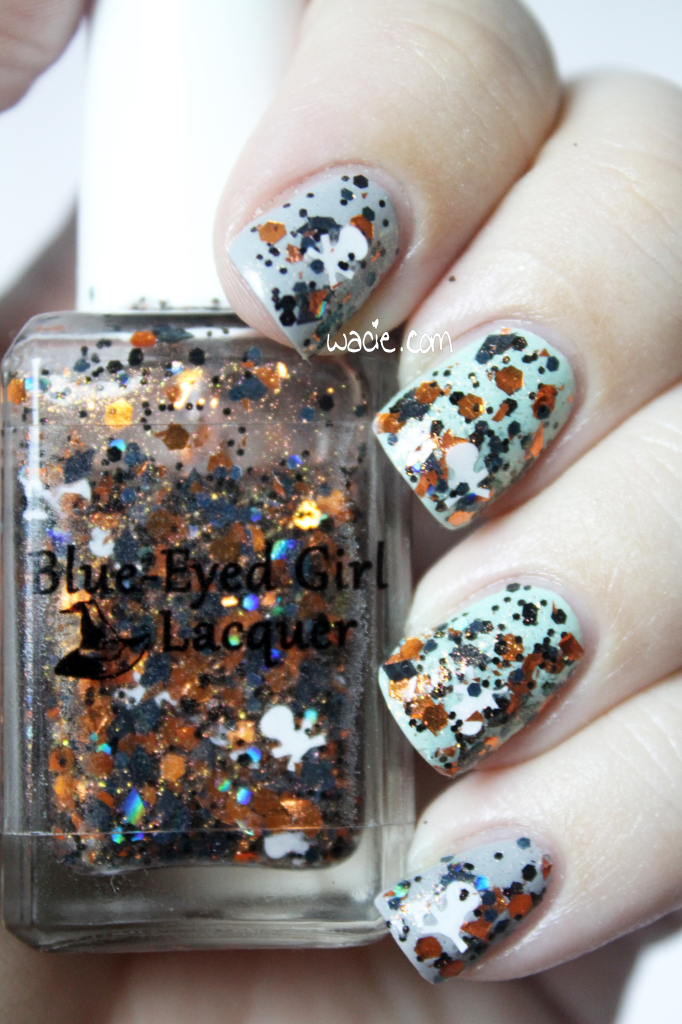 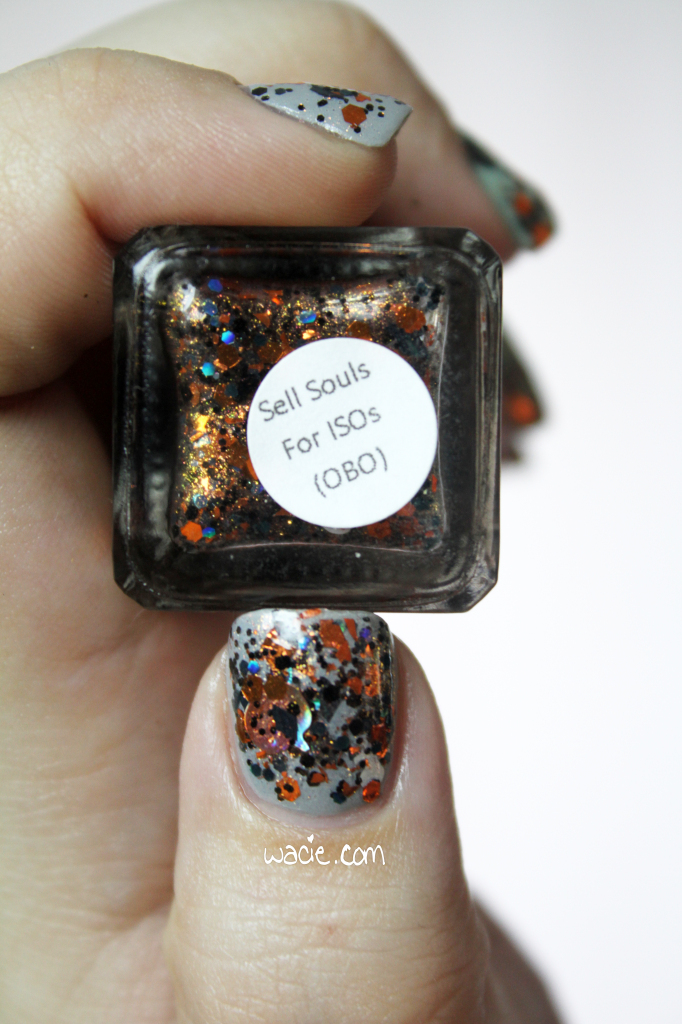 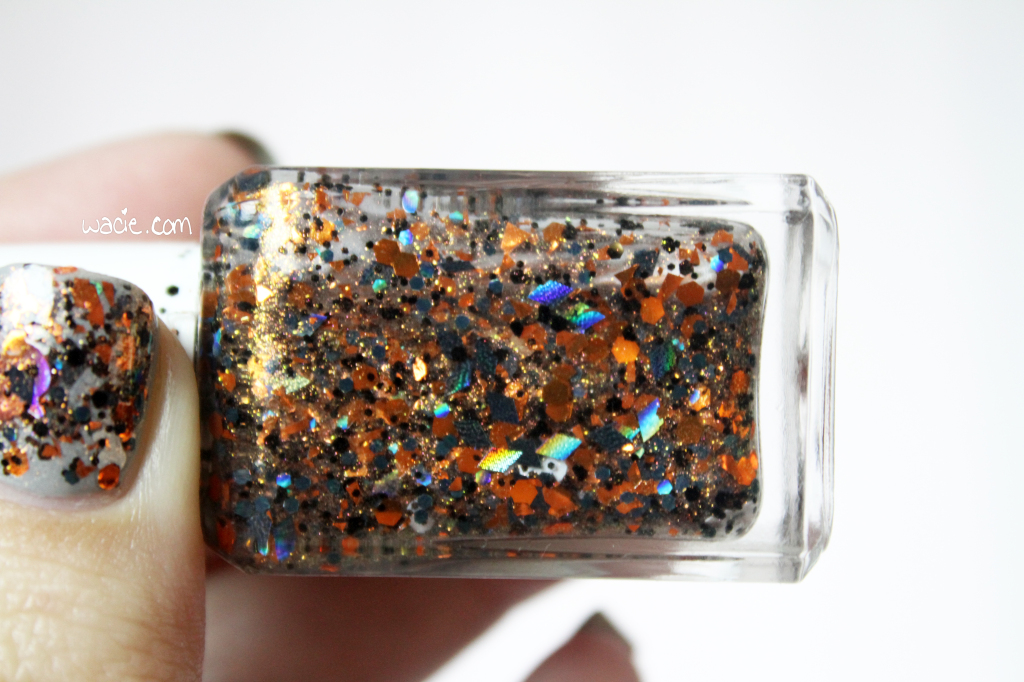 Sell Souls for ISOs (OBO) is a clear glitter topper with orange shimmer, orange and black glitters, white skull-and-crossbones, and holo orange pumpkins. The skull and pumpkin shaped glitters were new at the time, and that was enough to sell me on this polish (or any polish, really). The description doesn’t really do it justice; you can look at the bottle and see a myriad of different shapes, sizes, and finishes of glitter. It’s a well-rounded mix. The skulls and pumpkin glitters are scarce, I fished for a pumpkin glitter for like fifteen minutes and the only one I got was the one on my thumb. They’re rare on purpose, so that they can easily be avoided, in case you happen not to like them, or happen to be wearing the polish in September. 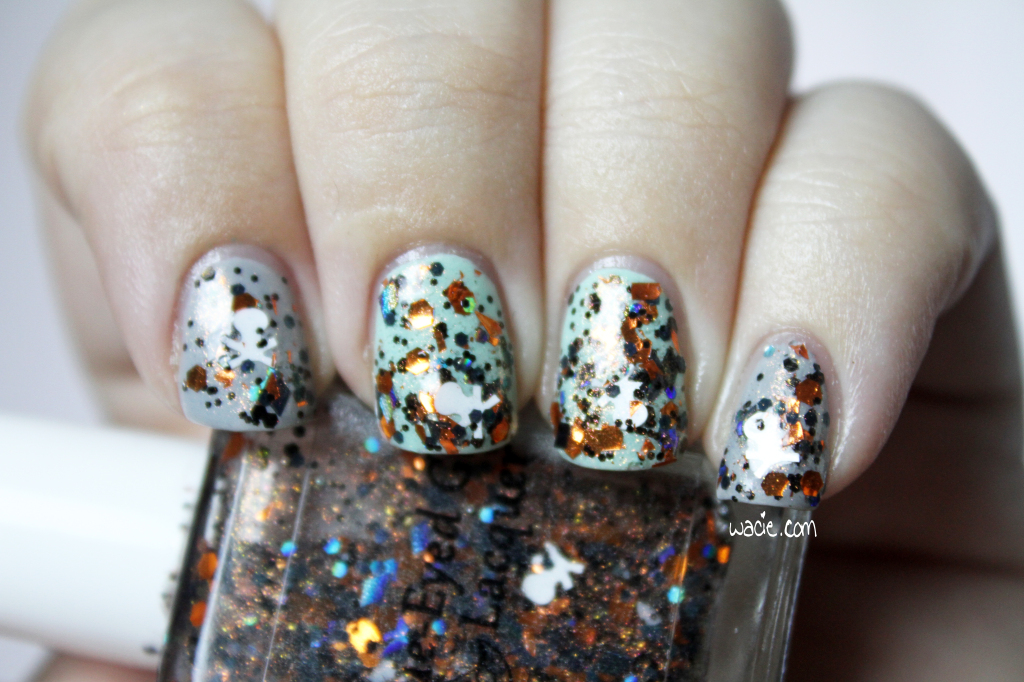 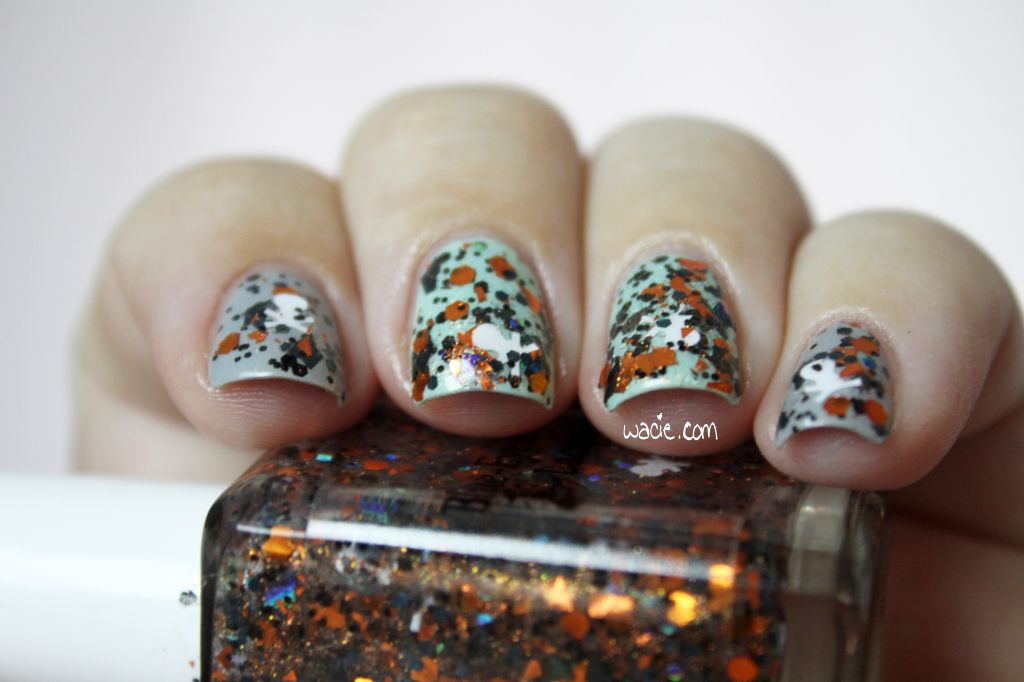 Application was easy, but because I swirled the polish around so much fishing for glitter, I ended up with a lot of bubbles. The drying time was pretty good for a polish like this; I really blobbed it on and it was dry in five minutes. The consistency was a bit thick, and got thicker as I used it, but that’s to be expected from a polish like this, and is easily remedied. 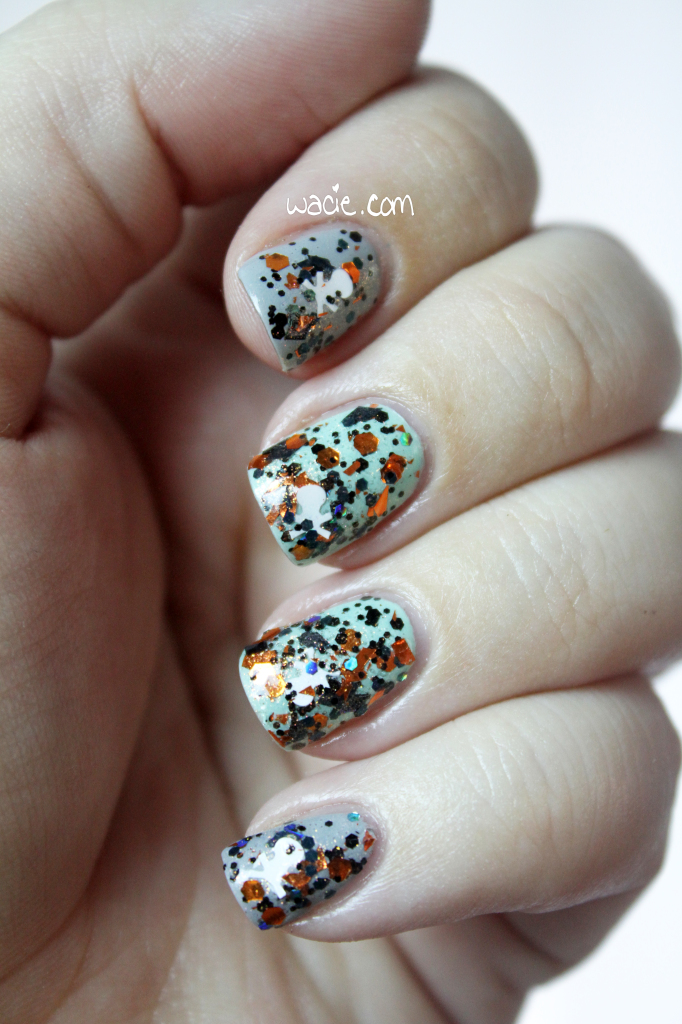 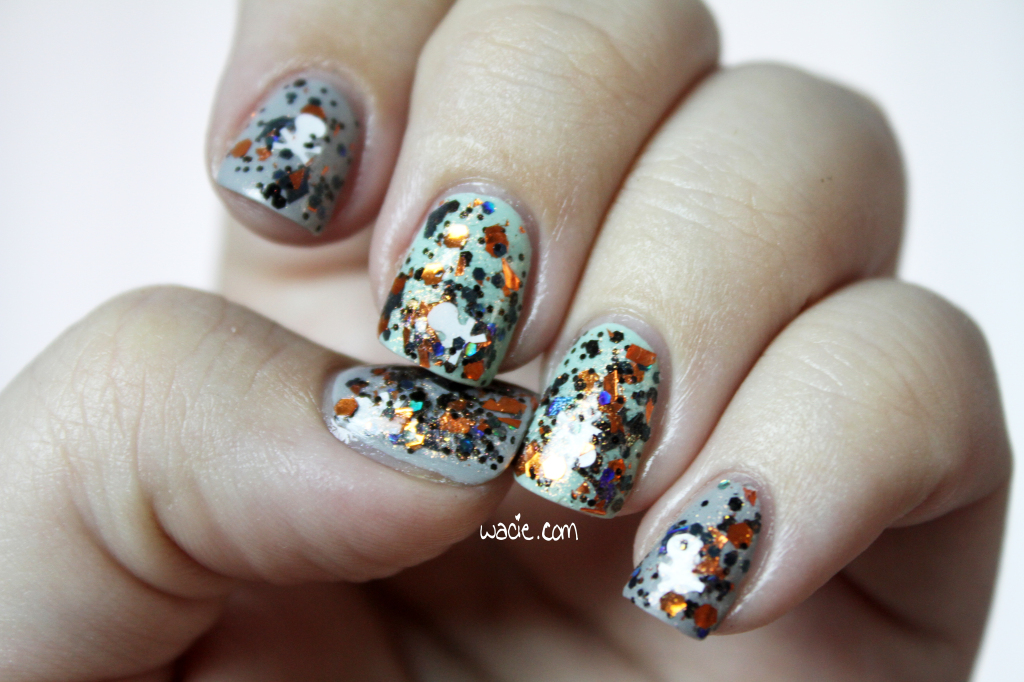 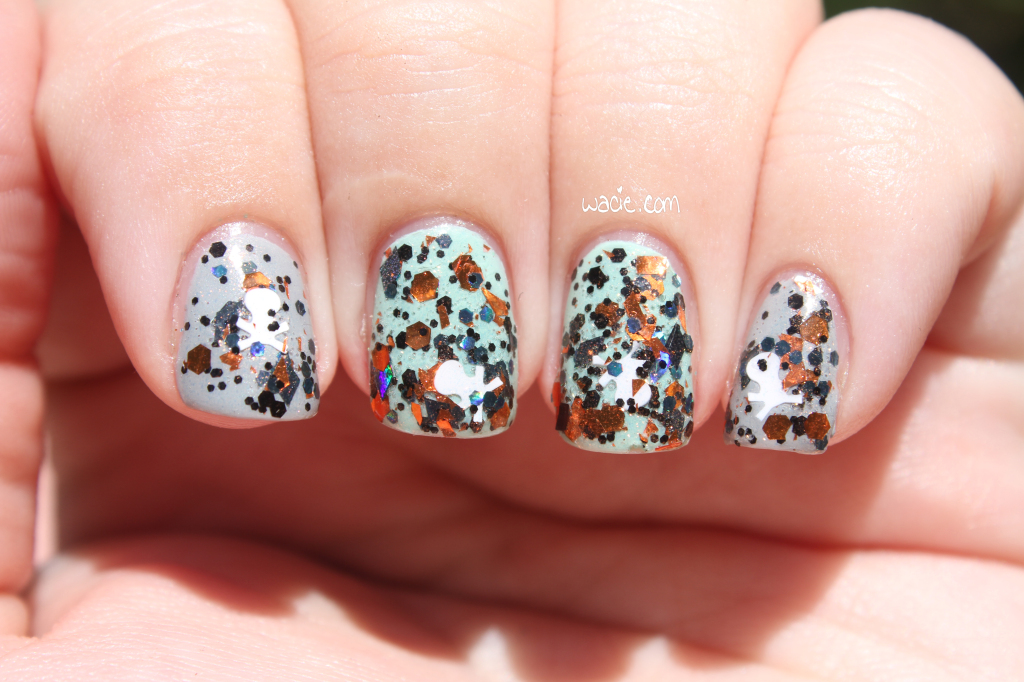 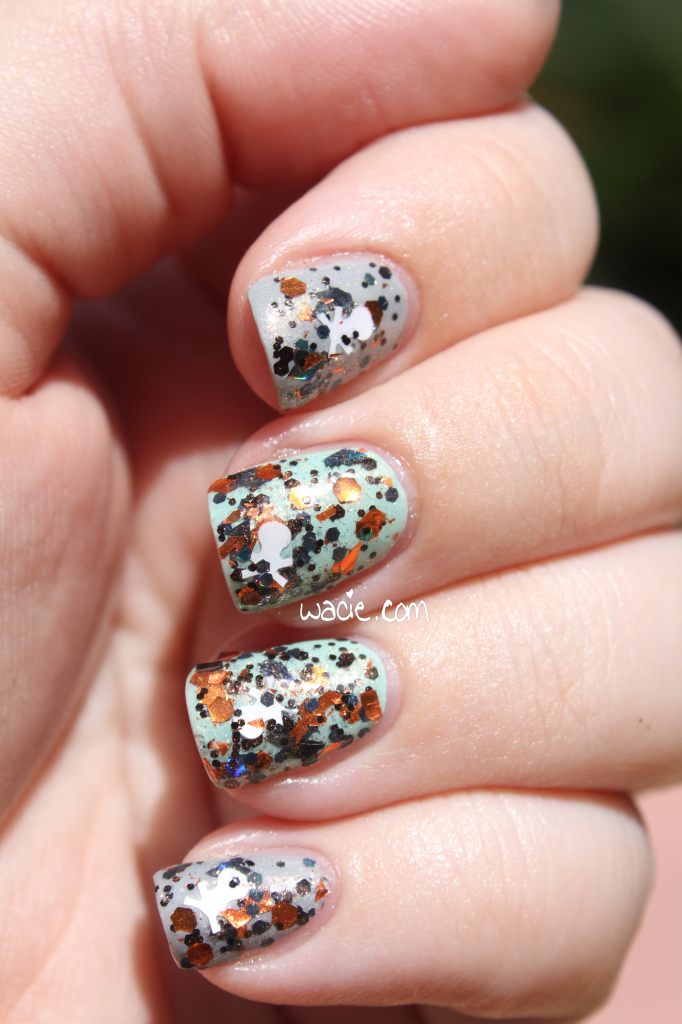 Now for a little lesson on lacquerista vernacular (because sometimes my mom reads this): “ISO” stands for “in search of”, and is used on message boards and such to express a strong desire to own a certain polish. These are often small batch polishes that aren’t widely available or have been discontinued by the maker. A desperate lacquerista might resort to some pretty drastic measures to own it, hence the name of this polish. We all have a polish we’d sell our souls to own. Mine is Lobster Roll from Enchanted Polish. You don’t know the horrible things I’d do for it.