It’s Monday, and it’s time for manicures! This week, I’m using the one Color Club Halo Hues polish I own. I gotta say, for a mass-market holo, it’s pretty good! This is Beyond; I’m wearing three coats with one coat of Seche Vite top coat. All photos were taken in direct sunlight. Also, full disclosure: it’s been raining most of the day, so when it stopped and the sun was actually shining, I ran outside before everything was totally dry and smudged my ring finger. I decided to just photograph it as-is instead of redoing it and risk losing the sunlight. 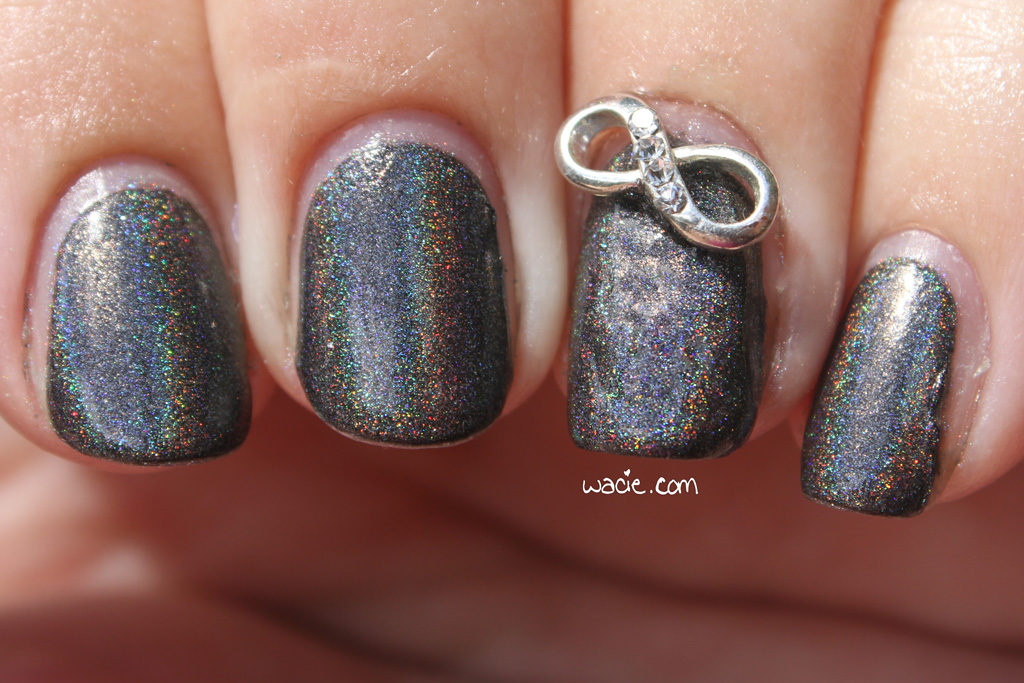 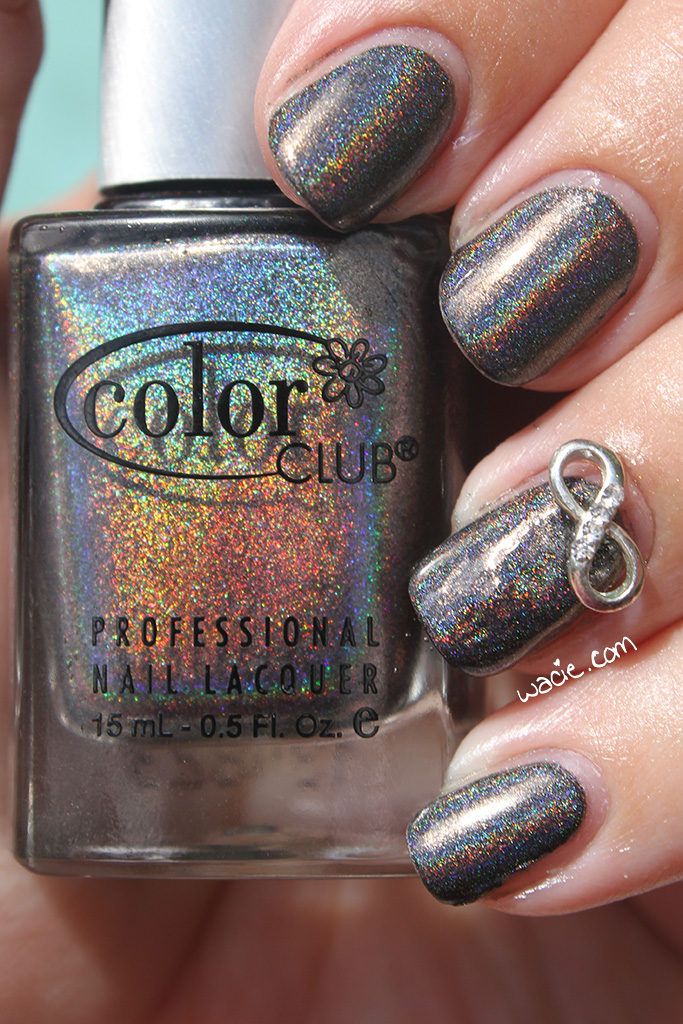 I remember the Color Club holos being a huge deal a couple years ago. They were easily the most accessible linear holo on the market at the time. I saw more of these in nail polish communities than actual indie holos. Beyond isn’t the most unique polish; it’s a warm gray holo, but still pretty comparable to early indie holos — Blue-Eyed Girl Lacquer‘s Don’t Worry, I Don’t Bite is one that comes to mind. Of course, that can work to its advantage, too; if you love those basic early holos but they’ve all been discontinued or reworked, these are certainly for you. 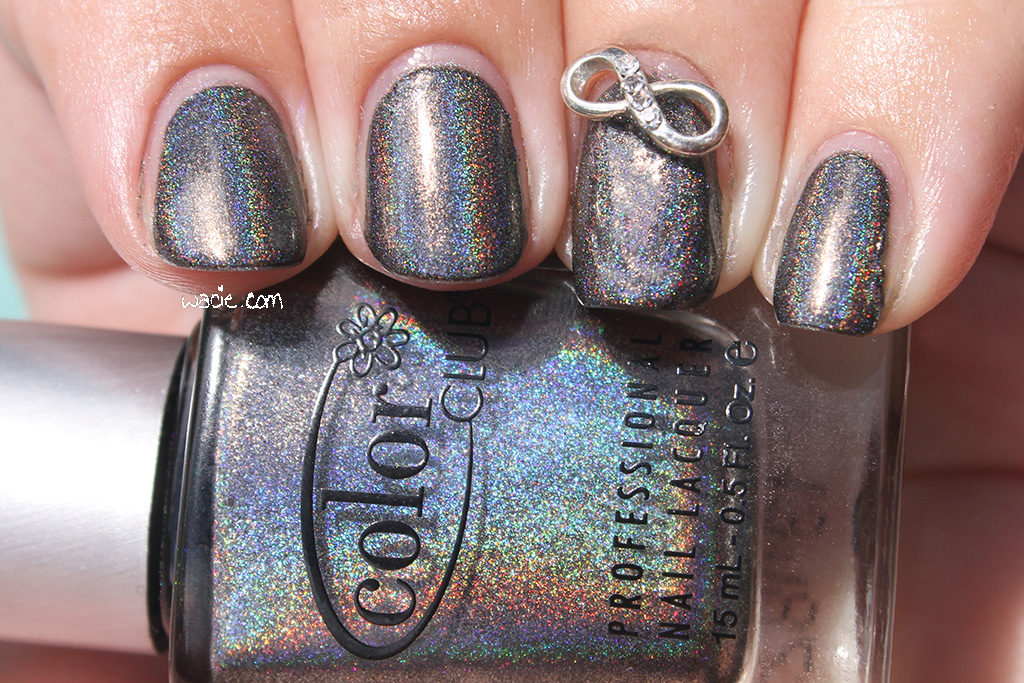 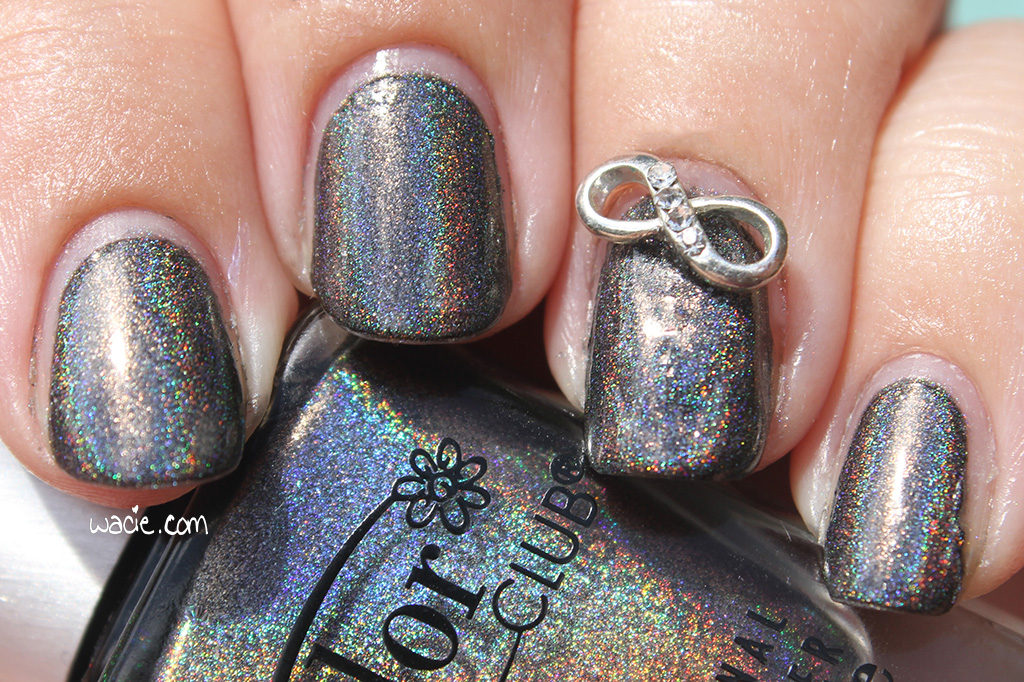 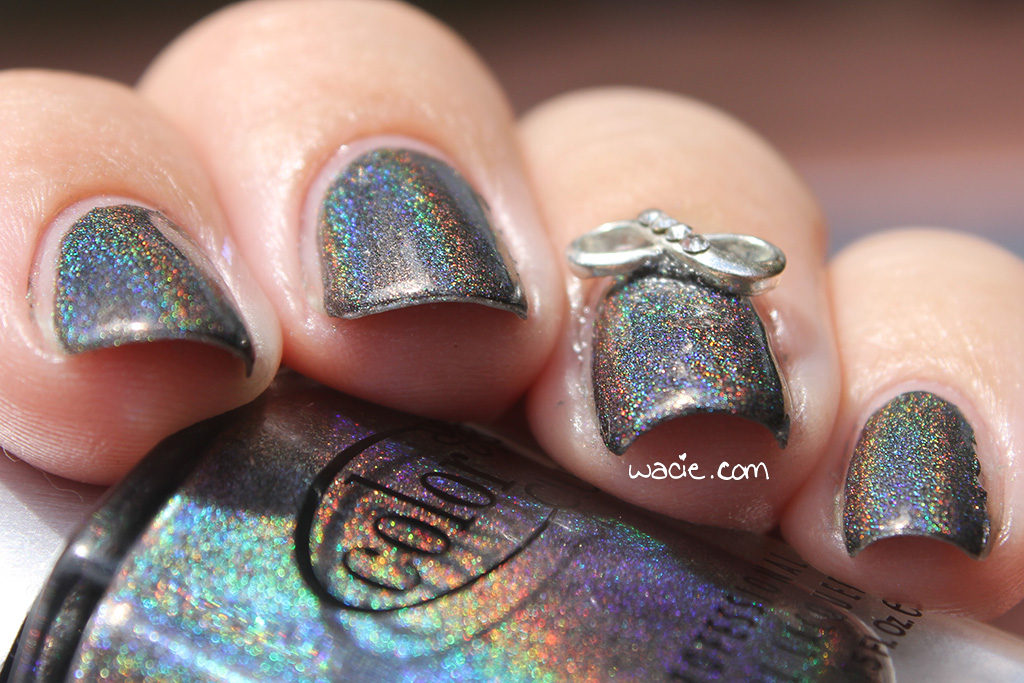 I think I actually bought this one on accident. I actually wanted Kismet, that dreamy silver holo from the same collection, and I goofed and got Beyond instead. Not that I’m complaining. I love wearing this, and I don’t feel so guilty about using it so much as I do with the indie holos. I know I’d have a much easier time replacing this one than, say, a sought-after Enchanted. 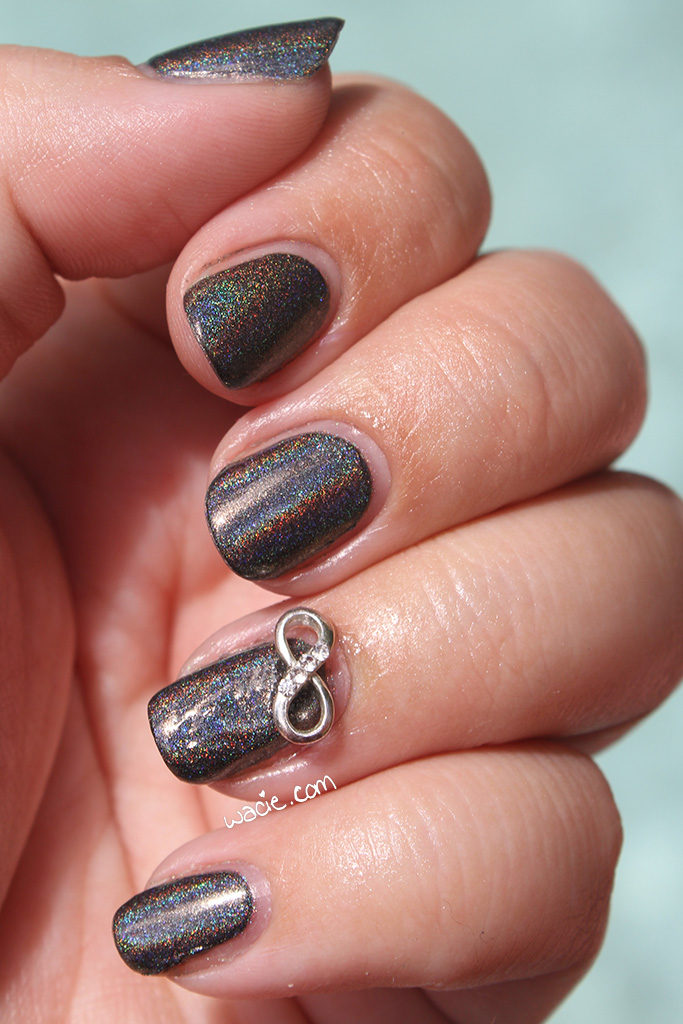 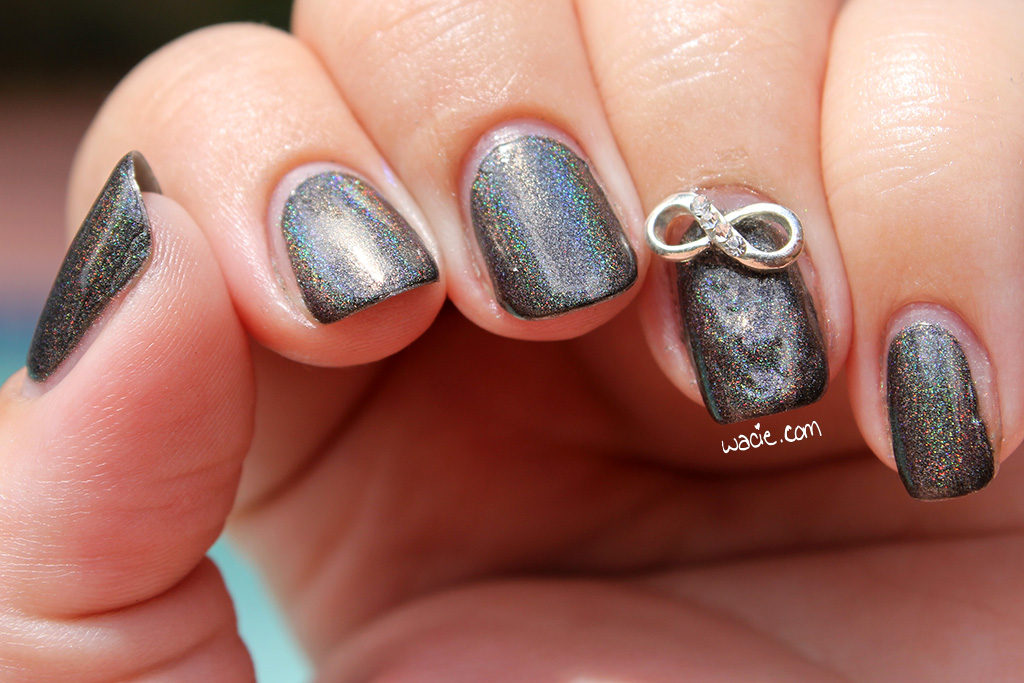 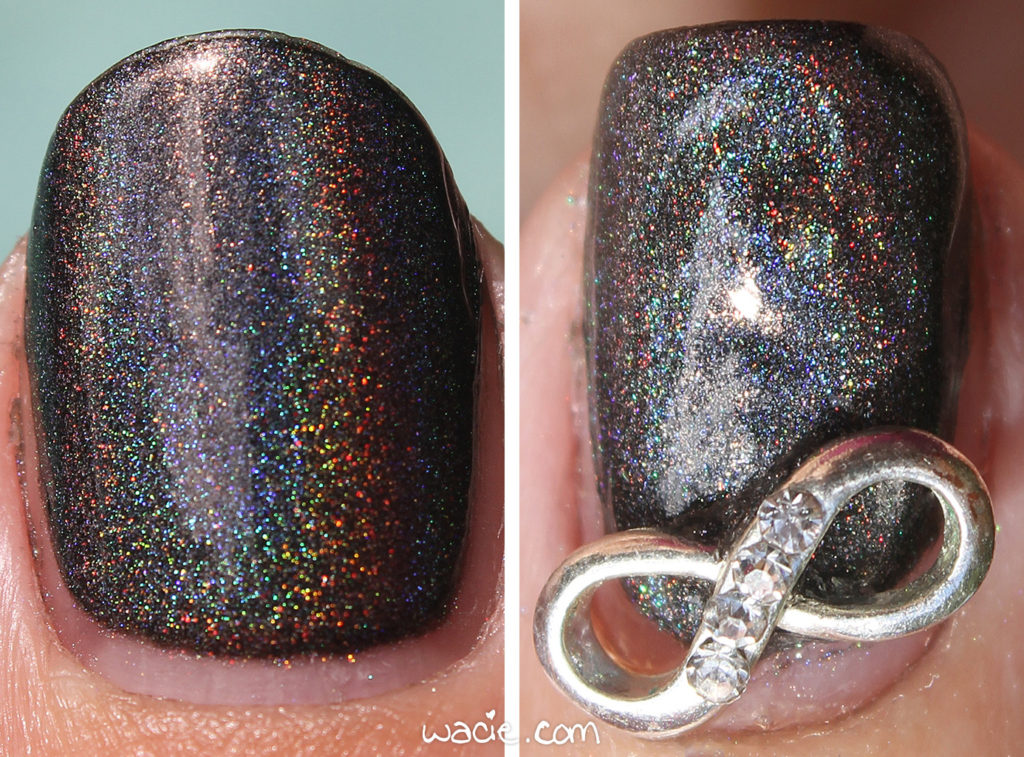 I’m still so sad about that smudge. It looks worse in real life than it does in photos; I ended up bumping it again on the way in and I’m probably going to redo it anyway just because it bugs me. I feel like a bad blogger for posting these — especially the macro — but as I write this, another bout of storminess is rolling through, and I know I did the right thing.

Beyond, Halo Hues, and other Color Club shades and products are available on ColorClub.com. The infinity loop bow is from Daily Charme.

13 thoughts on “Manicure Monday: Beyond”