Happy Monday! This week’s look is pretty simple. After being at a loss over what to put on my nails, I finally settled on a dotticure after realizing I’ve never really done one. This is Ellagee‘s Liliana and A Rhyming Dictionary Polish‘s Heathendom. 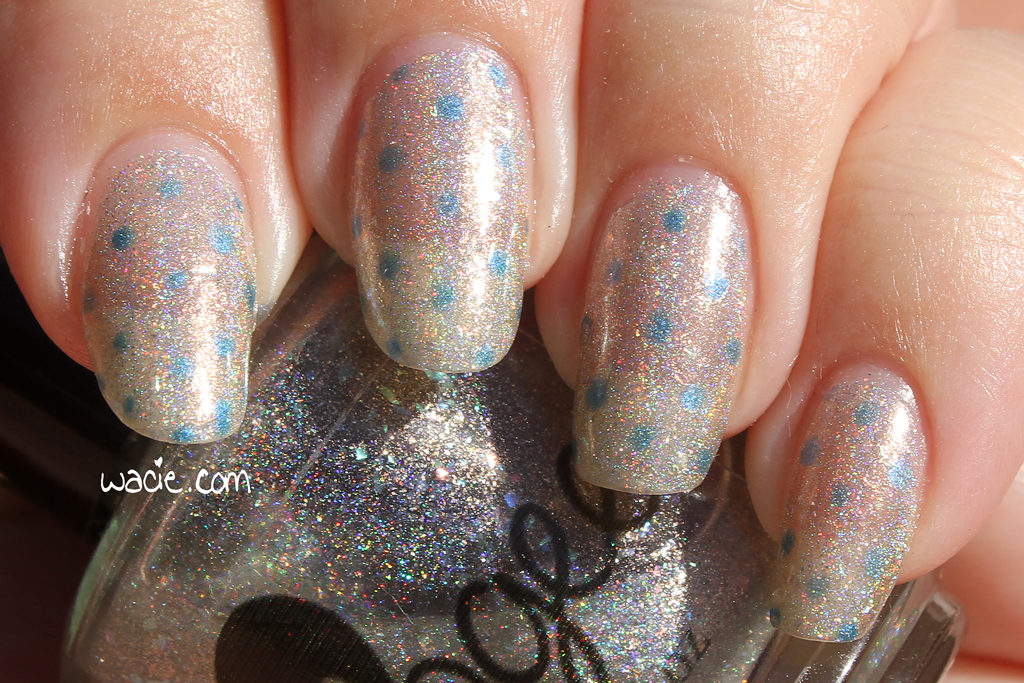 Liliana is from a 2015 Ellagee collection. Yeah, I had to scroll way back through my Instagram photos to determine how old it is. Before this (and now, too, I suppose), I had a pretty limited experience with Ellagee, only having polishes from collaborations with other indies. This is the first one I’ve ever used that was independent of any other maker. In a word, wow. Seeing Liliana on my nails reminds me why I bought the whole collection. The holo is so strong, and the iridescent flakies floating in the polish are so super pretty. I wish this one was a little more opaque, but it’s gorgeous regardless. I’ve got some others from this collection I’ll be using pretty soon! 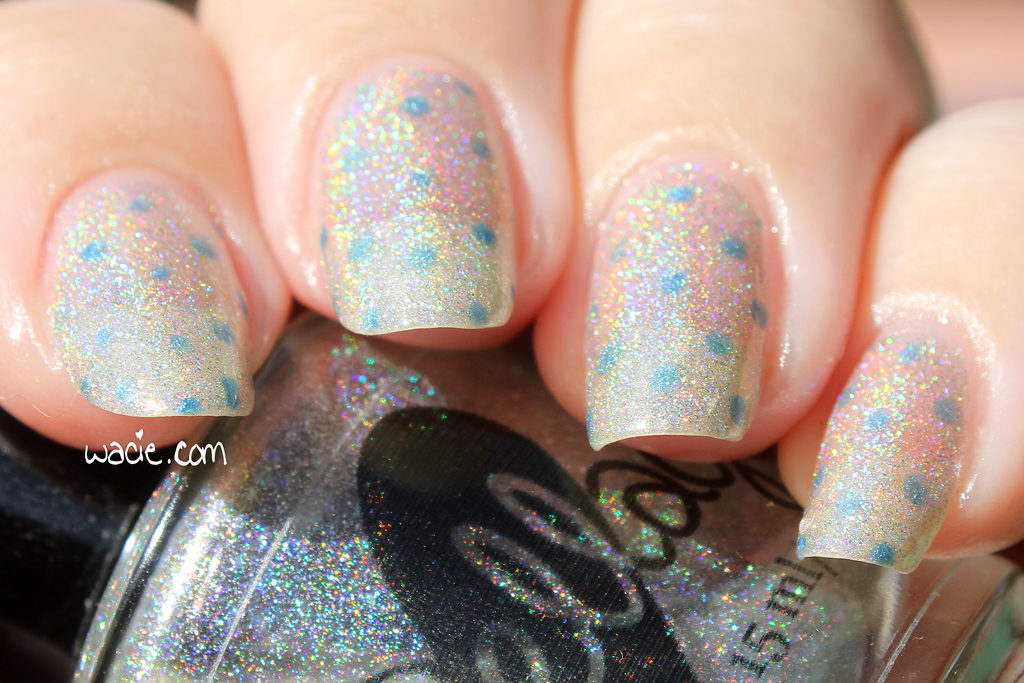 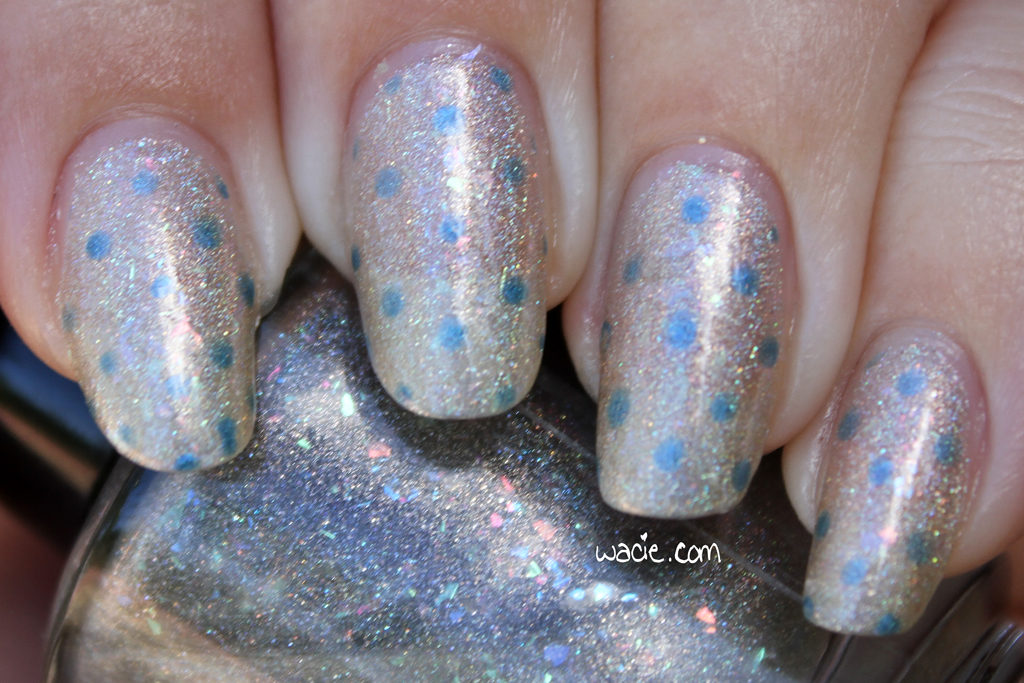 The flakies show up beautifully in the shade.

I used Heathendom as my accent here because it’s also a holo, but you can’t see the holo effect in the dots. I wanted an all-over holo effect, but now that I’ve done it, I should have used a blue creme, something that with more contrast. The dots are a bit more visible in the shade than in the sun. It’s a cute look either way. 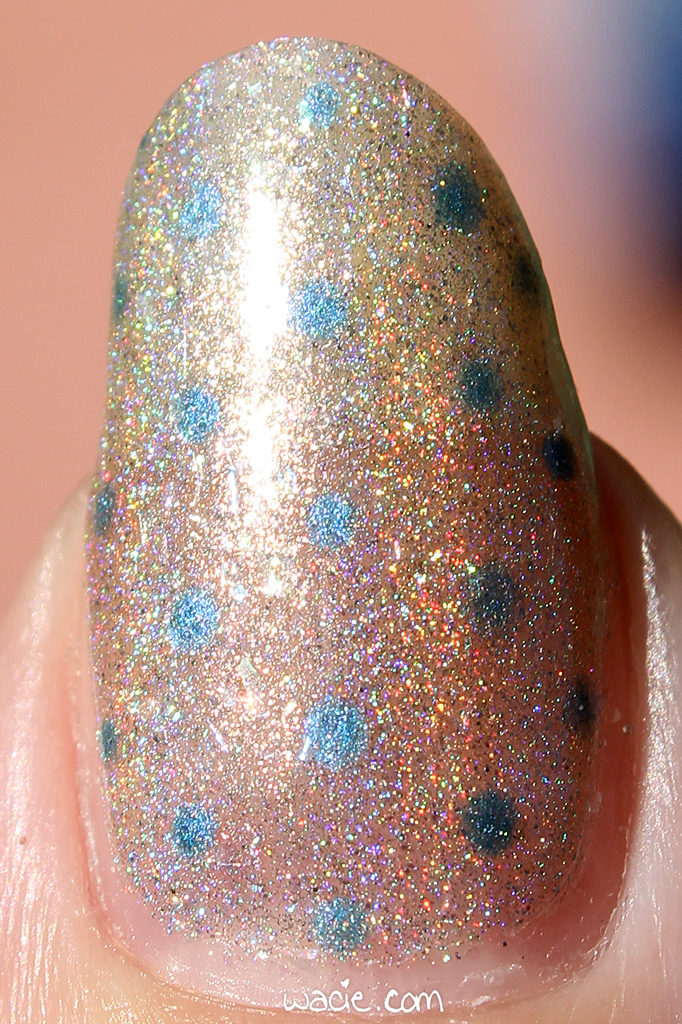 Liliana was discontinued by Ellagee; other polishes are for sale at ellagee.com. Heathendom was a limited polish made for a collaboration with Blue-Eyed Girl Lacquer; other Rhyming Dictionary Polishes are for sale in their etsy shop (though it appears they’re on a break).

Happy Sunday! Today’s post is a little different from the usual Swatch Sunday business, because we’ve got a twofer as the polish this week. Revlon’s French Mix set comes with two colors and encourages you to do some nail art with them. This set is called Sweet Revenge. In the photos below, I’m wearing three coats of each polish with one coat of Seche Vite top coat. 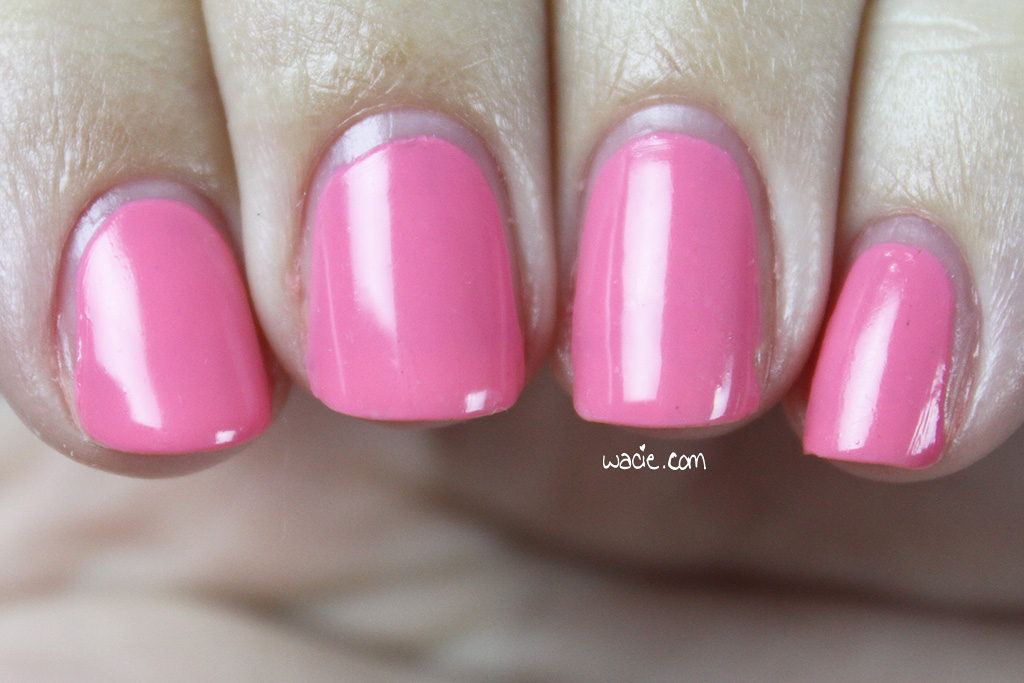 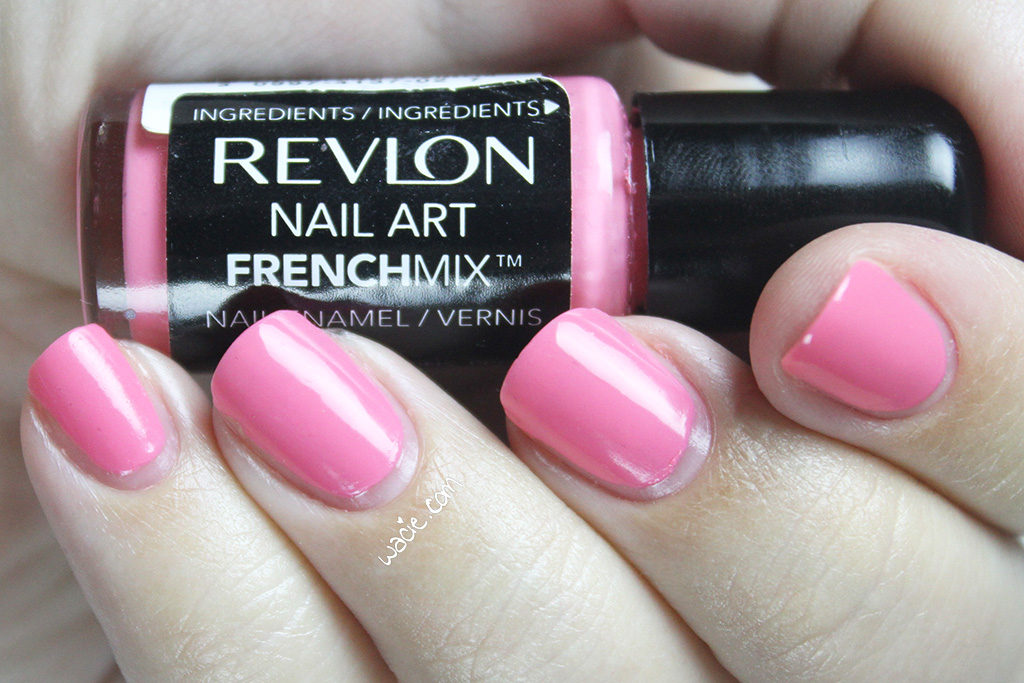 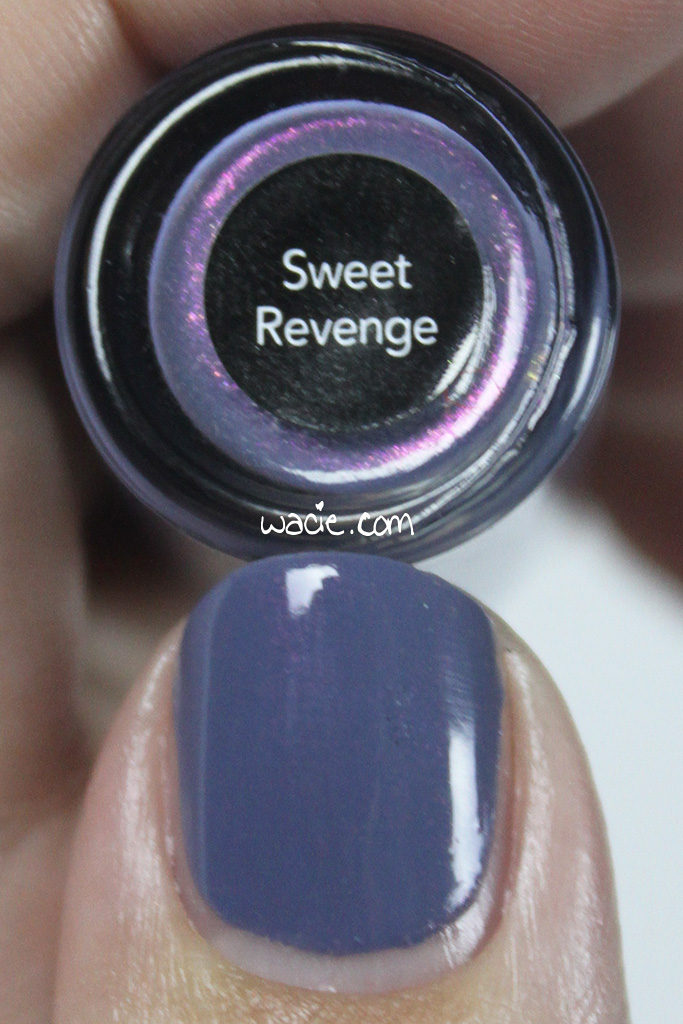 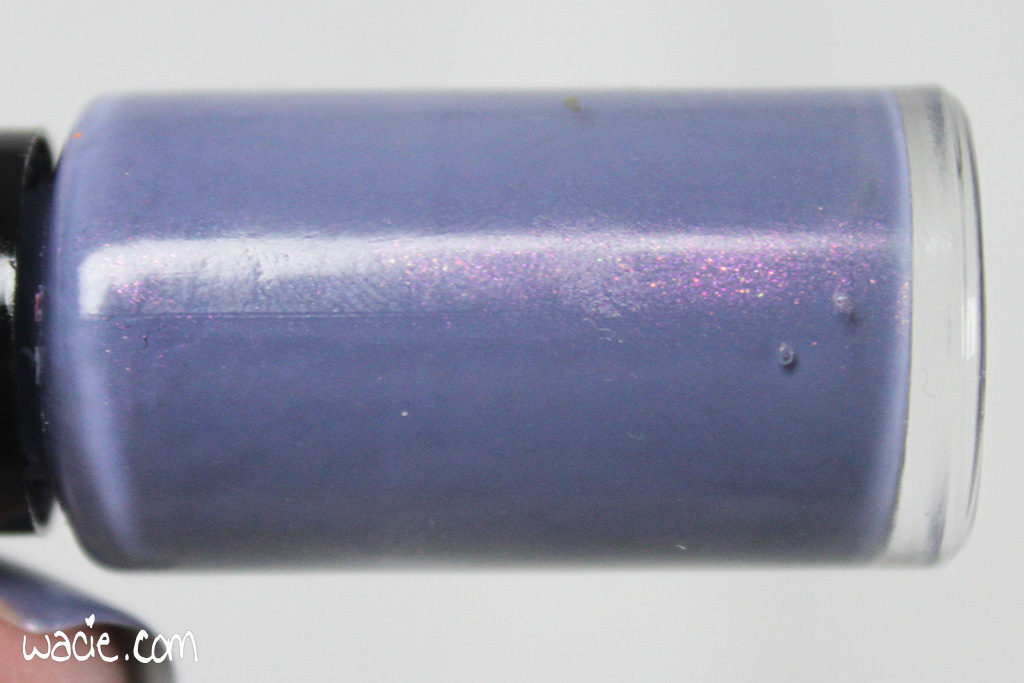 Before I talk about the polishes, I want to talk about the packaging, because it directly affects the quality of the polish. While this double-ended polish brush seems really stylish and convenient, I’ve had nothing but problems with them. The brush caps break and stops fitting inside the brush cap, or the polish itself dries out. Either way, the polishes end up becoming unusable. When I took this one out to use it, the brush to the purple polish was broken, and the pink polish was totally dried out. If you have any of these polishes and you hate the packaging as much as I do, you may be pleased to know that the brushes and caps from mini polish bottles from TKB Trading are the same size and will fit very well. This is how I was able to separate mine and save the polish inside.

The pink in this set, as I mentioned, was totally dried out, but I saved it with polish thinner. Because of this, and because I had to use so much, I can’t speak for the consistency of this polish, or what it was like before I had to thin it out. When I applied it, it was on the thinner side, and required all three coats for full opacity. 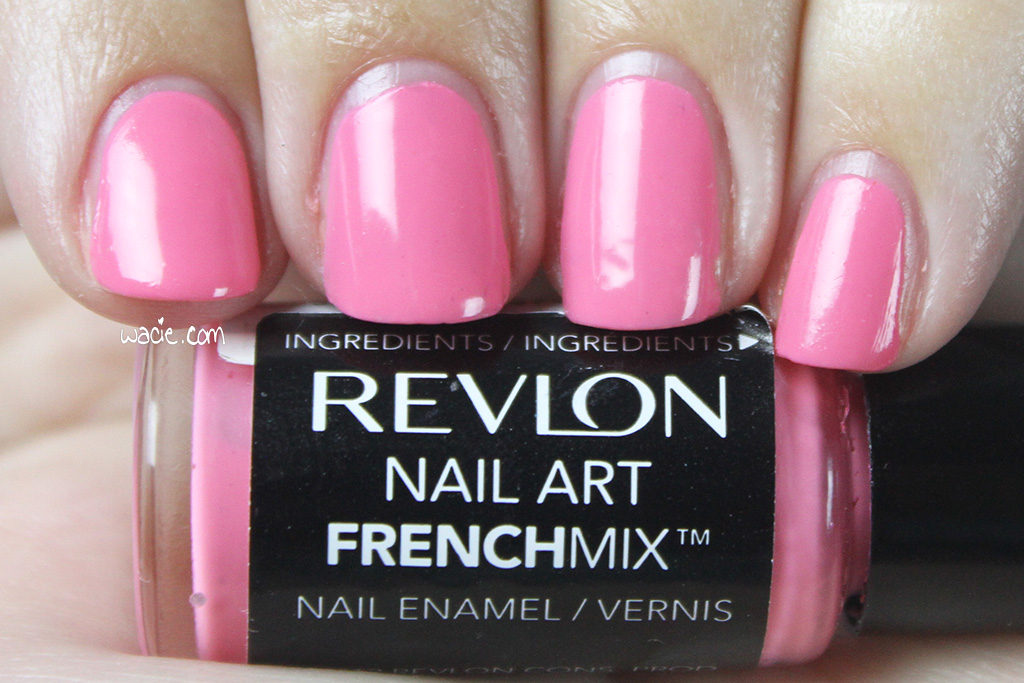 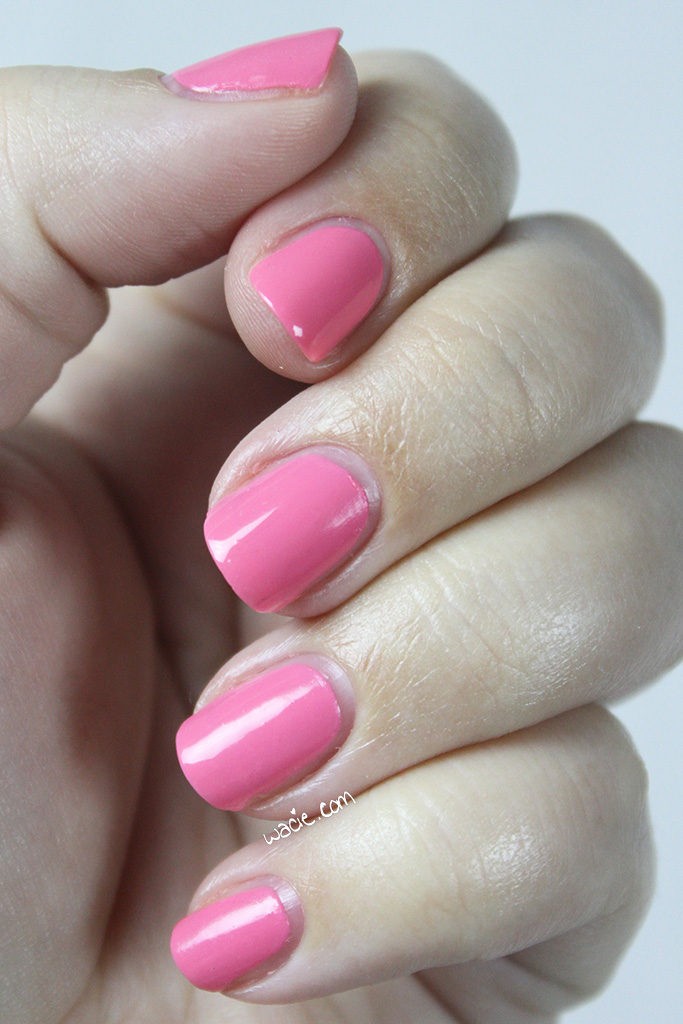 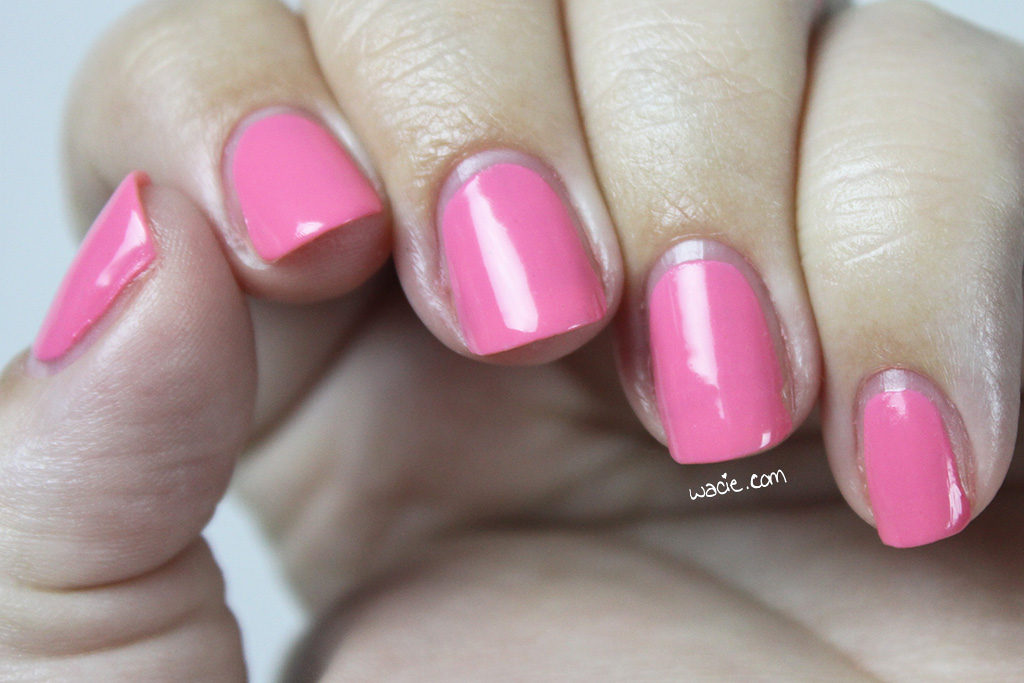 The purple polish is very opaque, and achieved full opacity by the second coat. The pink shimmer, though fine, appears best in lower light; the studio lights washed it out a bit. The purple polish was the best suited for nail art because of its opacity. Both polishes dried quickly with glossy finishes. 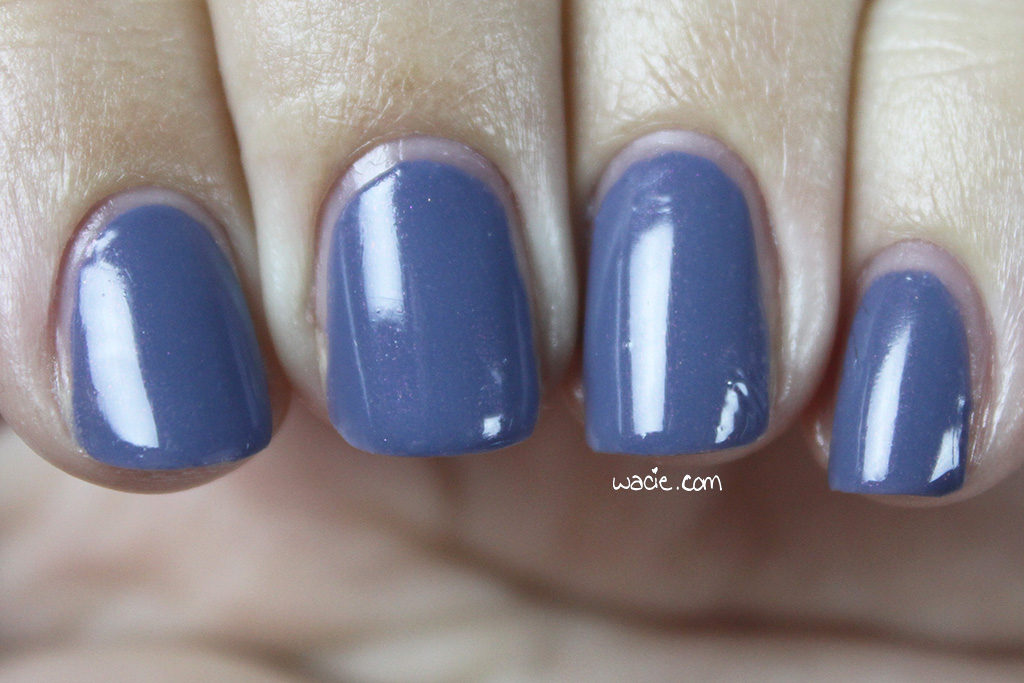 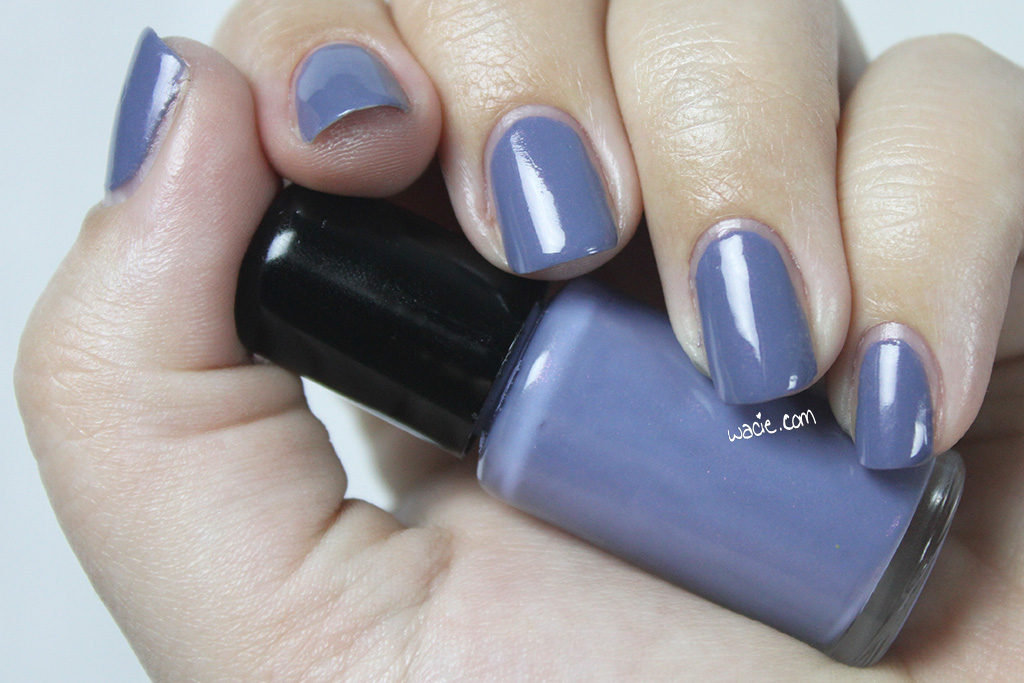 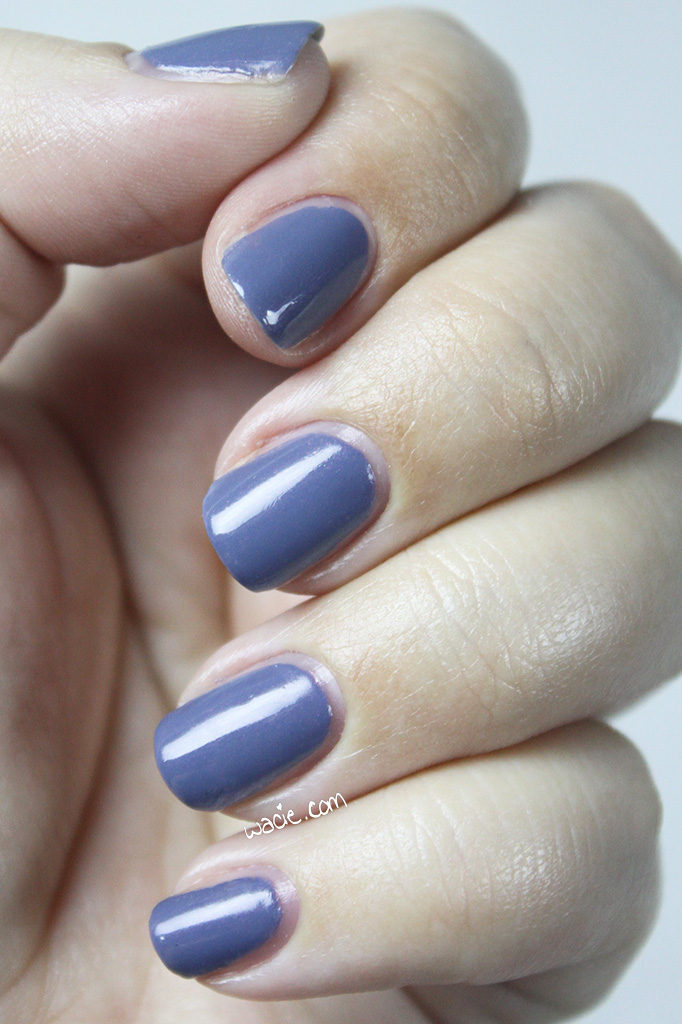 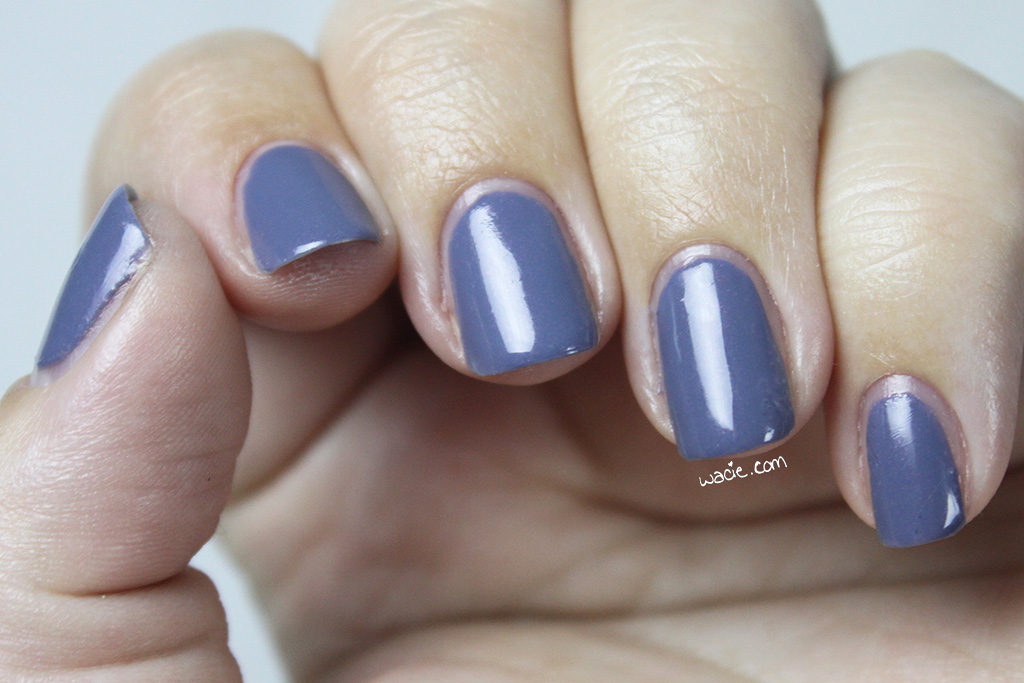 I did a quick skittle mani just to see how well each one works for actual nail art. The pink, though it does work for some things, isn’t thick enough to fully cover the purple, which is opaque enough to cover anything. I’ll definitely be using the pink as the base color from now on. Photos were taken in both the studio and outdoors in direct sunlight. 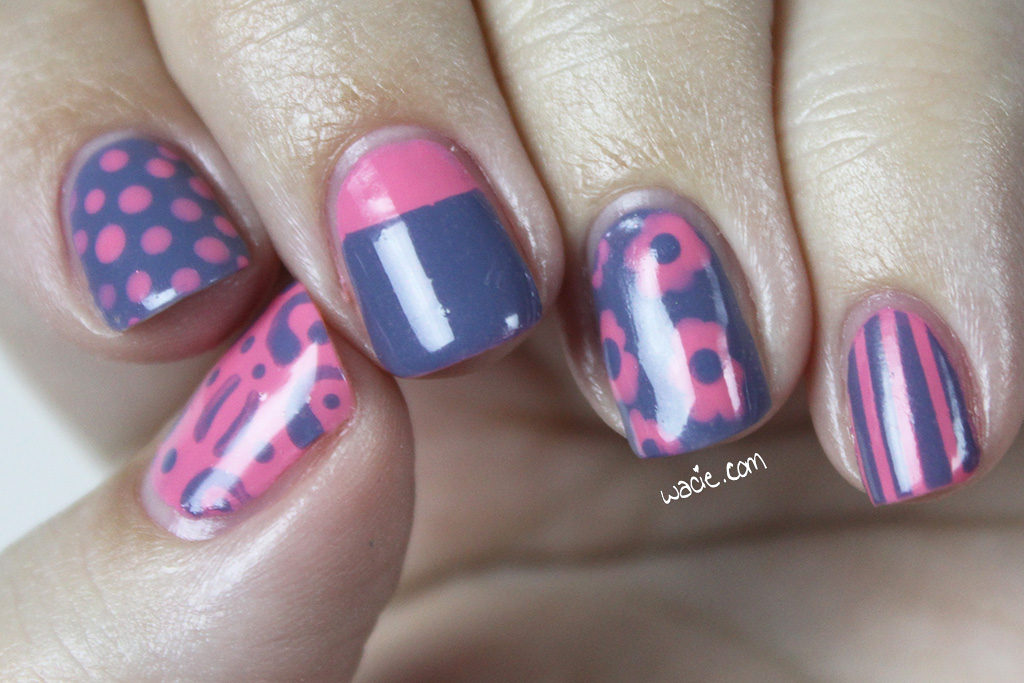 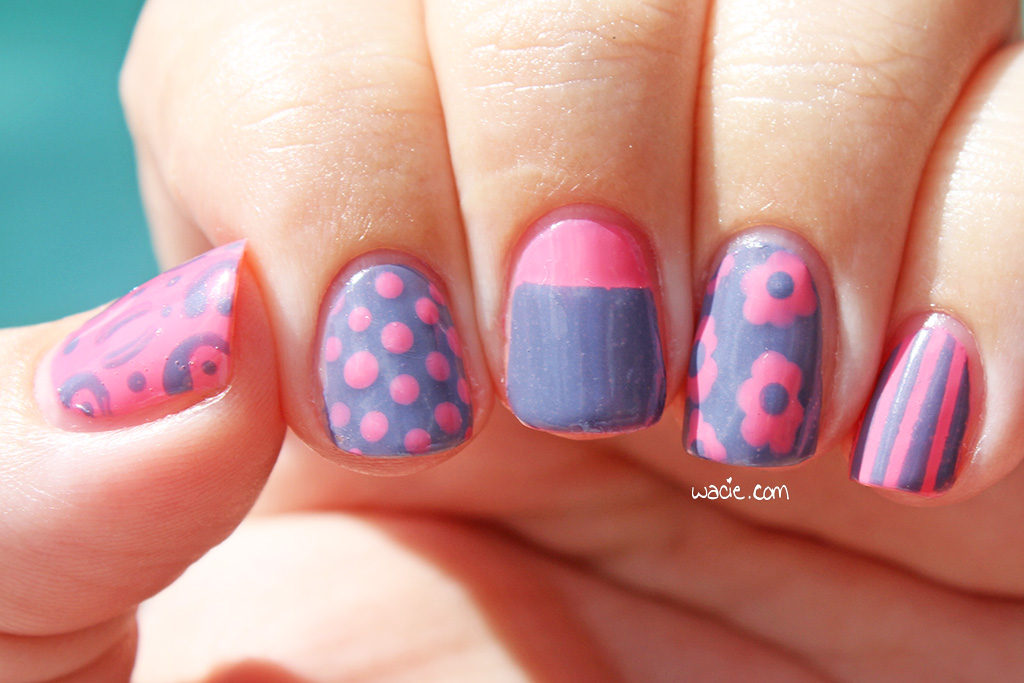 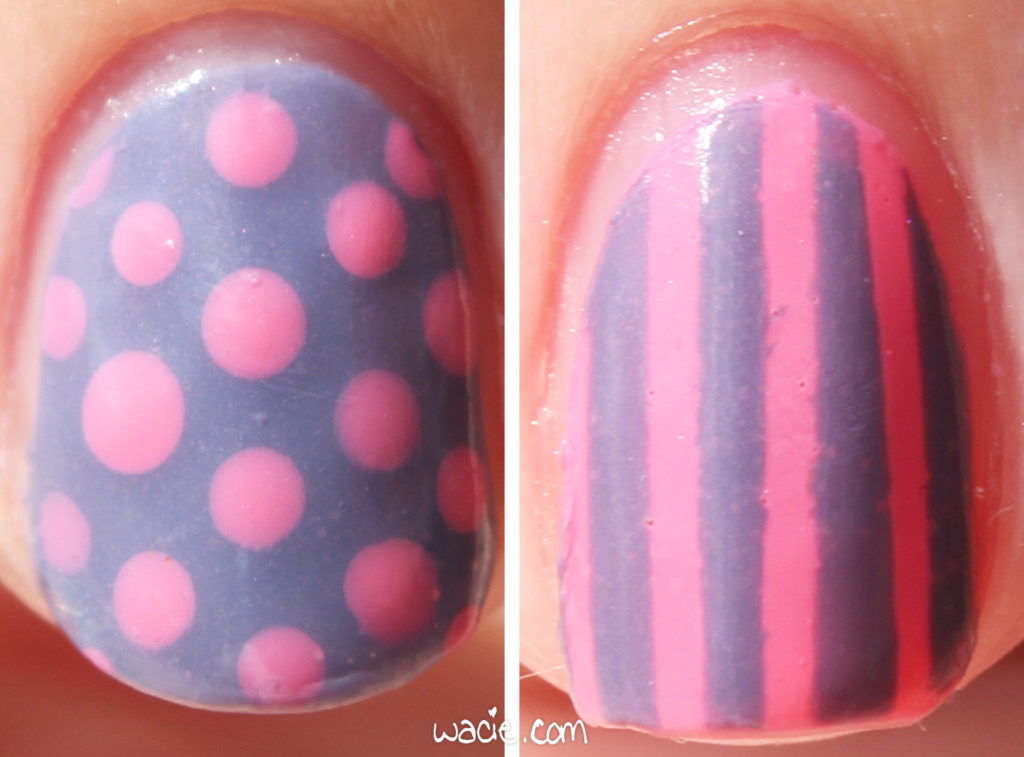 Sweet Revenge, the French Mix series, and the double-ended brushes in general seem to be discontinued by Revlon, because I don’t see them on their website (good). Other Revlon products are available nationwide.

I bought this product myself.

Welcome to Manicure Monday! I think you’ll be pleasantly surprised to see that I got off my duff, got the dotting tool out, and did some real nail art. I still kind of suck with the dotting tool, but I’m really pleased with my results. For this look, I used Maybelline’s Red Relic as my primary color, Ciaté’s Gold Digga as the secondary color, and caviar beads in Gleam, also from Ciaté. I also used Seche Vite and Hard Candy’s Just Matte top coat. 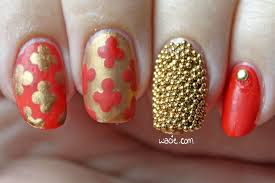 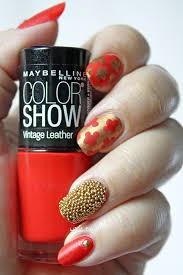 Red Relic is a fun little polish. It’s a red jelly with iridescent pink flakies that dries matte. I was a little disappointed when I first tried it out, because I’m not a huge fan of the matte finish. I supposed then that it wasn’t anything top coat couldn’t fix, so I kept it. The finish has grown on me, though. It’s actually the reason I made the whole manicure matte. Gold Digga has a metallic shine, and I needed to even it out with a matte top coat, so the finish you’re seeing is actually the matte coat, not the original Red Relic finish. 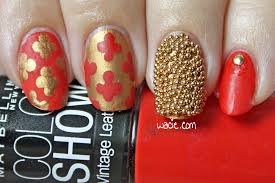 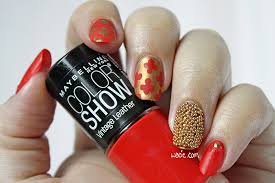 Gold Digga and the Gleam beads came together in a caviar nails set that was in the sale bin at Sephora. Gold Digga is a pretty nice polish; it’s a burnished gold with a rich metallic finish. It also looks fantastic mattified. The matte coat hides the brush strokes and evens out the color. It’s rare that I think a polish looks better without a glossy finish, but this one definitely does. I feel like it helps emphasize the luxe feel Ciaté was going for. 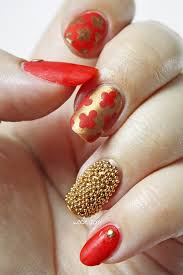 The two colors together are gorgeous. I got the elegant and opulent look I wanted. I’m just a bit unhappy with all the nail art horrors my camera captured. In the photos you can see just how uneven the crosses are, you can see all the gaps in the caviar, you can see the glue spots where I put the studs down. I know nobody probably noticed them until I mentioned them, but when I look at these photos, they’re all I see. In person, though, this mani is perfect.

Red Relic was a limited edition and has been discontinued by Maybelline, though you can find it if you look around the internet. Gold Digga and the caviar nail kit are available from Ciaté’s website. Hard Candy’s matte coat is from Walmart. My studs are from an outlet store.

I bought all of these products myself.